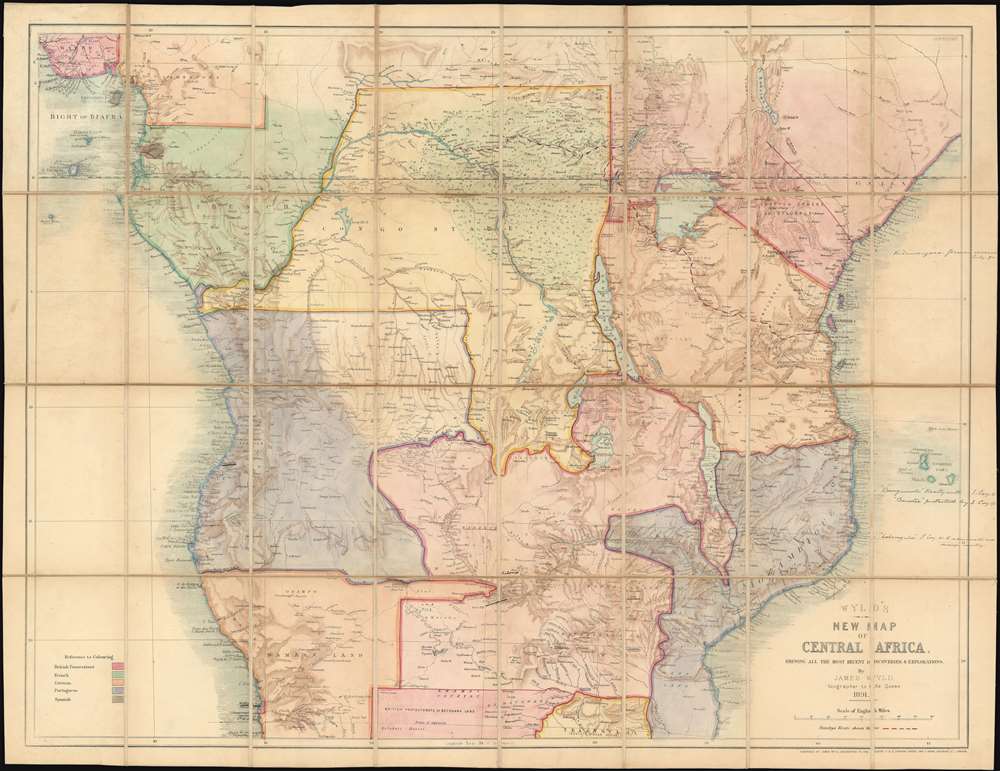 Scramble for Africa: The founding of the British Central African Protectorate.

An exceptional and rare find, this is Wyld's 1891 map of Central Africa, one of the few contemporaneous 'Scramble for Africa' maps to illustrate the Anglo-Portuguese conflict over Central Africa (1890 - 1891) and the founding of the British Central African Protectorate. Moreover, the present map features manuscript updates reflecting treaties and events that contributed to defining the Protectorate's borders.

1890 British Ultimatum and the Anglo-Portuguese Treaty of 1891

This map illustrates the founding of British Central African Protectorate following the 1890 British Ultimatum and the subsequent Anglo-Portuguese Treaty of 1891. The 'Ultimatum' was memorandum from the British Government to Portugal, demanding withdrawal from traditional 'discovery based' Portuguese colonial claims in Central Africa in deferment to the 'New Imperialism' concept of Effective Occupation (see below). While the Portuguese argued for a Trans-African Portuguese zone, the British wanted to establish a contiguous North-South line of colonies in anticipation of the 'Cape to Cairo Railway', potentially linking British holdings in a lucrative transportation network. The Ultimatum, enforced by powerful British naval, military, and mercantile forces, ultimate led to the Anglo-Portuguese Treaty of 1891. Under this agreement, boundaries were established for the British Central Africa Protectorate, (now Malawi), and the territories administered by the British South Africa Company in Mashonaland and Matabeleland (now parts of Zimbabwe) and North-Western Rhodesia (now part of Zambia) and Portuguese Mozambique, and also between the British South Africa Company administered territories of North-Eastern Rhodesia (now in Zambia), and Portuguese Angola - all of which is evident on this map!

The 'Scramble for Africa' was a series of late 19th century occupations, usurpations, annexations, divisions, and land seizures by European powers in Africa, particularly Britain, France, Belgium, Portugal, and Germany. Beginning around 1881 and continuing until 1914, the Scramble for Africa was part of the era of New Imperialism, marked by heightened occupation and direct ownership of colonial lands rather than the more traditional 'treaty based' colonization. The Scramble led to a number of new African states, many of which remain today, but few of which paid heed to traditional rivalries or cultural distinctions. The scramble culminated in the Berlin Conference of 1884, wherein European colonization of Africa was regulated and made official and the doctrine of Effective Occupation was introduced.

The map's coverage includes central and eastern Africa from 10° N to 23° S, embracing much of modern-day Zaire, Angola, Kenya, Uganda, Tanzania, Malawi, Zambia, Namibia, and Zimbabwe. It is color coded to define territories claimed by various European powers, including the British (red), French (Green), German (yellow), Portuguese (purple), and Spanish (grey). The need to clearly illustrate the diversity of claims accounts for the maps vivid and unusual coloration.

This map was published by James John Cooper Wyld (184 - 1907), the last descendent of James Wyld I (1790 - 1836) to work in the map trade. There are two editions, 1890 and 1891 (present example), each is significant reflecting different phases in the Anglo-Portuguese conflict over Central Asia: the 1890 British Ultimatum and the subsequent Anglo-Portuguese Treaty of 1891. This map is scarce. We have identified only 4 examples of this, the 1891 issue, in institutional collections, and no market history. Of the 1890 issue, we have identified 5 examples, 2 of which passed through the trade in the late 20 years.