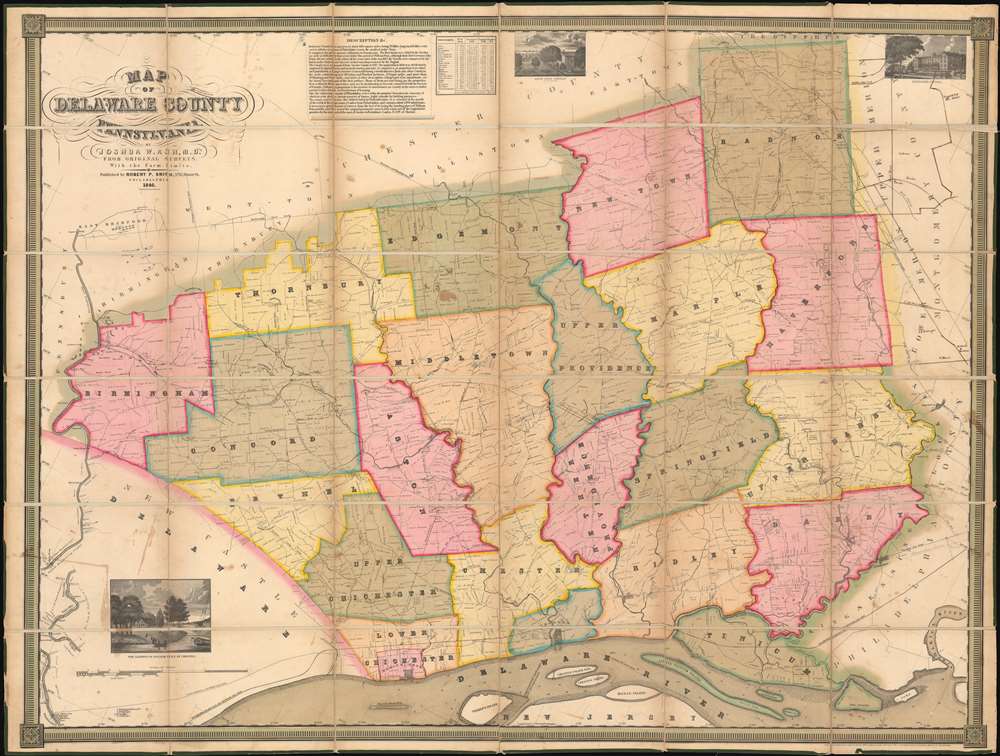 One of only 4 known surviving examples of Joshua W. Ash's important 1848 map of Delaware, County Pennsylvania. Delaware county, located just southwest of Philadelphia, is one of Pennsylvania's oldest and most historic areas, the home of Swarthmore College, the Haverford School (Haverford Friends School), the Elwyn Institute, and numerous other institutions. It was here, at Chester, that William Penn first landed in 1682, founding the Quaker colony of Pennsylvania. At the time this map was made Chester was a region of rolling hills and gentlemanly estates - including the mapmaker Ash's own family properties.

Centered on the Delaware County Institute of Science, or 'Institute of Science' as it is defined here, this map is oriented to the Northwest and covers all of Delaware County. The map is color coded by township. All roads, buildings, and property holdings are meticulously mapped, with important buildings and individual landowners named. Although Swarthmore College is not named, having not yet been founded, the farm of Benjamin West that would eventually become the school is noted with its original boundaries. Insets illustrate Aston Ridge Seminary, the Haverford School, and William Penn's landing site at Chester.

The minutes of the Delaware County Institute of Science describe it's making by Ash, who was a member,

… Dr. Joshua Ash's map of Delaware county of 1848, the map made by the doctor himself by personal survey, as he trudged with chain and instruments and wheelbarrow and notebook throughout the county, a map that is wonderfully accurate, the base of practically all succeeding maps and an enduring monument to its maker. (Proceedings of the Delaware County Institute of Science, Volumes 7-9, page 69.)

Ash's map was immediately recognized as the definitive map of Delaware county, despite being published in a very limited issue.

The Delaware County Institute of Science was a private club in Media, Upper Providence Township, dedicated to advancing the sciences founded was formed on September 21, 1833. It is identified here, featured prominently at center. It was founded by five local businessmen, George Miller, Minshall Painter, John Miller, George Smith, M.D., and John Cassin. The Institute's main building is now a natural history museum and library, with regular lectures and educational events.

The map exhibits numerous manuscript updates and revisions, both defining changing property lines and the construction of new roads. The work is done in an experienced hand, suggesting great care. While these revisions reveal nothing about the map in specific, in general we have found such work tends to appear most commonly on maps associated with law firms and survey offices.

This map was published in a single edition by Robert Pearsall Smith, a map publisher then active in Philadelphia. It is based upon ground survey work completed by the Delaware County medical doctor and railroad man, Dr. Joshua Ash. The engraving was completed by Gustavus Kramm, a German line engraver based in Philadelphia and associated with Smith.

Examples of this map are rare. The Library of Congress owns the definitive example, which is fragmentary and in poor condition. Other examples are noted in Hagley Museum in Wilmington, Delaware and at the Clements Library at the University of Michigan. There is some suggestion that an example may exist in the British Library, but records are unclear. As of 1951, at least one example remained in private hands in Delaware County, this possibly being that example.

Joshua W. Ash (July 3, 1802 - February 26, 1879) was an American physician, railroad tycoon, and mapmaker active in Delaware County, Pennsylvania, in the middle part of the 19th century. Ash was the director of the mine Hill Railroad and Allegheny Railroad. He was also involved with the Apprentices' Library of Philadelphia and the Pennsylvania Training School for Feeble-Minded Children at Elwyn (Elwyn Institute), Delaware County, PA. Learn More...


Robert Pearsall Smith (February 1, 1827 - April 17, 1898) was an American map maker active in Philadelphia from the middle to late 19th century. Smith was born to a Quaker family in Philadelphia, all librarians and publishers. Robert Pearsall originally ran a law bookstore at 19 James Street, Philadelphia. It was not until 1846 that Smith began producing maps in collaboration with this father, John Jay Smith, and brother, Lloyd P. Smith. One year earlier, in 1845, John Jay, then librarian at the Library Company of Philadelphia and Loganian Library, acquired the American rights to the anastatic process of transfer lithography. In February of 1846 he and his two sons founded the Anastatic Office, a printing concern based on the anastatic process located at 317 Market Street, Philadelphia. The Anastatic Office produced numerous copies and reissues of historic documents and maps from the Library Company's collection before being dissolved in 1847. In the same year Robert Pearsall opened a printing establishment under his own name at 144 Chestnut Street. Smith was also deeply religious, a lay leader in the Holiness Movement in the United States and the Higher Life Movement in Great Britain. Smith and his wife, Hannah Tatum Whitall, first crossed the Atlantic to preach in England, Germany and Switzerland in 1873. They returned in 1875, preaching in Brighton, where Smith supposedly had an affair with an American writer. In, 1888, his entire family moved to England. Learn More...


Gustavus Kramm (September 1, 1808 - August 15, 1864) was a German born line engraver and lithographer based in Philadelphia in the middle part of the 19th century. Kramm was born in Frankfurt-au-Main. He immigrated to the United States sometime in the 1830s, where he completed contract engraving in both New York and Philadelphia. His is known to have worked for Lehman and Duval, the Library Company of Philadelphia, Robert Pearsall Smith, George Worley, and others. He seems to have been active in Philadelphia exclusively between 1844 and 1854, when he completed his most significant cartographic engraving work from offices he shared with L. N. Rosenthal at the southeast corner of Third and Dock. He lived at 1 Emslie Alley and later at 27 Wharton street. In 1854, he relocated to Cincinnati and later St. Louis. In 1863, during the American Civil War, he enlisted in the 37th Iowa Volunteer Infantry Regiment, known commonly as the 'Greybeard Regiment' for its requirement that all members be over 45 years of age. Due to the advanced age of its constituency, the 37th Iowa saw little action, serving primary in a support capacity. Nonetheless, Kramm is reported to have died of an 'accident' with serving in Memphis, Tennessee. Learn More...