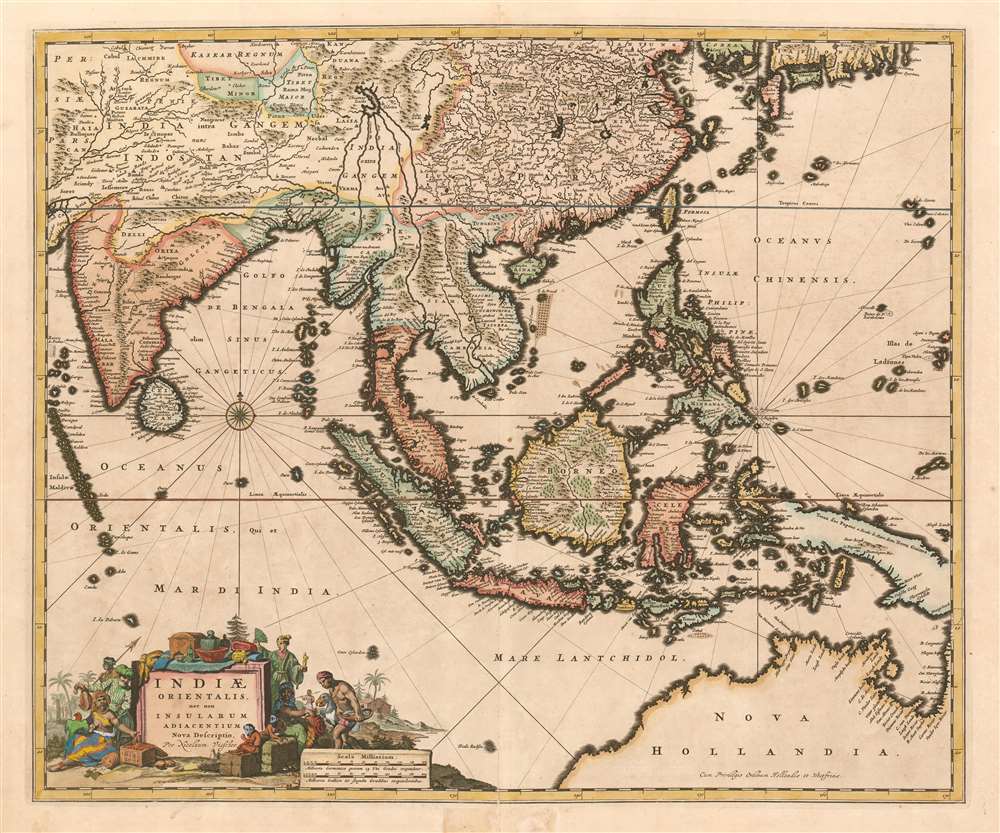 A Classic, Richly Detailed and Updated Dutch Mqp of Southeast Asia, the Spice Islands and Australia
$1,850.00

This is Nicolas Visscher's c. 1657 map of the East Indies, one of the defining Dutch maps of the primary source of Dutch wealth for the second half of the 17th century. The map shows India and the Indian Ocean, the East Indies, the north coast of Australia showing the Gulf of Carpentaria, and New Guinea. China is shown, as are the southern coasts of Korea and Japan.

The Visscher family generally employed larger plates and finer detail than the mapmakers of the first half of the 17th century, generally improving the clarity of the maps and allowing the addition of more geographical detail. This map's inclusion in Jansson's 1657 atlas attests to its quality - in both scope and detail it far outstrips Jansson's own 1630 map, which remained unchanged in that firm's atlases. Visscher takes advantage of the larger plate size, extending the western reach of the map to encompass the Indian peninsula and much of the Indian Ocean, including the Maldives. The map extends southwards to be able to include the Australian coastline uncovered during Tasman's 1644 voyage, thus bringing the map considerably more up-to-date than the Jansson map it replaced. This map improves even on areas that the Jansson covered by showing them in considerably finer detail, with many more place names - the engravers' art having advanced to allow smaller, more legible lettering. China's mapping is state-of-the art, largely based on Martino Martini's geographical information, new to Europe in the 1650s. The southern coast of Korea resembles that which appears in the Martini maps, suggesting a correction from the old insular model appearing on Jansson's earlier maps.

The map's elegant cartouche emphasizes both the exoticism of the regions covered in the map, and the riches to be had there. The title is presented on a plinth, piled high with silks, chests and jugs; and crates of spices are stacked about it. Figures in the garb of Moguls, Sumatrans, Moluccans and a Japanese noble flank the cartouche. Monkeys cavort on spice bales; one of the figures carries a parrot. To the right, a native carries a tray of fish - Visscher's cartouches frequently sported a fisherman, as an allusion to the family name. This particular 'Visscher' also carries what appears to be a dodo.