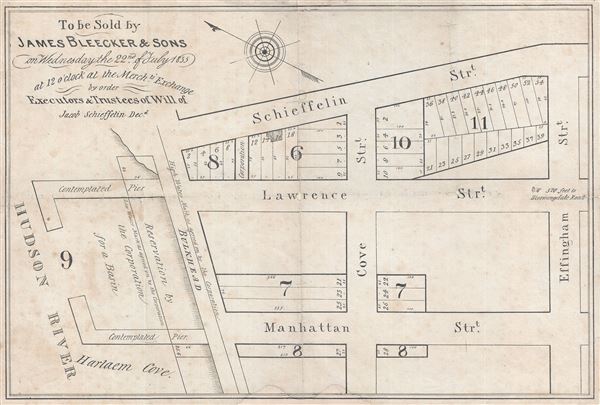 An exceptional discovery, this is an 1835 broadside map may be considering a founding document of the New York City's Manhattanville. The broadside map advertises the sale of land owned by the estate of Jacob Schieffelin (1757 - 1835) in upper Manhattan's by the auction house James Bleecker and Sons. The area covered, what was once called Harlem Cove, is on the west side of Manhattan between 129th and 133rd street - now known as Manhattanville. The streets identified on the map no longer exist as such, but Manhattan Street, is today's 125th, which today runs in a northwesterly angle (unlike the other numbered streets) towards the Hudson River. Lawrence Street may have once been 126th, but the streets are now routed differently. Schieffelin Street, roughly equivalent to 130th street, no longer exists.

Schieffelin was the Philadelphia-born scion of a German immigrant merchant family. The Schieffelin family were prominent businessmen with lucrative contracts to supply the British Army before the American Revolutionary War. During the war they fled to Canada with many other loyalists. After the American Revolution, Schieffelin settled in New York where he established himself as a commercial druggist - acquiring in the process considerable wealth and property.

Around 1795 he began acquiring property along the Hudson River in upper Manhattan between 130th and 143rd street - an area he believed had potential for massive development. He also moved his own country 'seat' to 143rd and Broadway. Schieffelin encouraged settlement in the area and, along with his brothers-in-law Thomas Buckley and John B. Lawrence, he hired surveyor Adolphus Loss to lay out the grid for Manhattanville, which was formally incorporated as a village in 1806. The streets, we note here, are named after these Manhattanville founders: Lawrence, Buckley (just off this map to the south), Effingham (Schieffelin's son), and of course Schieffelin. Schieffelin believed the most valuable land in his Harlem portfolio were those lands abutting Harlem Cove - represented in this auction broadside - where he planned a series of piers and a boat basin. Harlem Cove, and the adjacent streets, formed early Manhattanville's commercial waterfront area, hosting factories, stables, and warehouses, shops, and offices.

Schieffelin died in 1835 following an unfortunate financial calamity. Several of his cargo ships transporting pharmaceuticals and medical supplies were lost at sea. He was forced to sell of much of his property to neutralize the losses. Already well advanced in years, the stress of this event must have been significant and may have led to his death. His family continued to liquidate holdings shortly after his death, including, as advertised here, the lots associated with the valuable Harlem Cove district of Manhattanville.

Despite Schieffelin's death and fiscal hardships his Manhattanville continued to thrive and his business recovered in the hands of his descendants. The Schieffelin drug company continued for some 220 years well into the present era.

Today Manhattanville is again undergoing a period of rapid development and expansion. Columbia University has acquired most of the property represented in this broadside map and is currently in the process of constructing a massive extension to their Morningside Heights Campus.

Based upon our study of a similar broadside in the collection of the New York Public Library, this map most likely lithographed by Prosper Desobry (d. 1843). While the areas covered are different, the two broadsides (this and the NYPL broadside) are stylistically similar and both refer to lands associated with the estate of Jacob Schieffelin. Other James Bleecker broadsides by other lithographers do exist, but they are markedly different in style and presentation, thus confirming our assessment.

This broadside auction advertisement was acquired from the decedents of Schieffelin and has not previously been on the market. A once in a lifetime opportunity for the serious New York collector.

Prosper Desobry (fl. 1824 - 1844) was a French lithographer active in New York City in the early 19th century. Desobry's corpus includes various privately issued plans of New York City, early survey maps, broadside auction advertisements, music sheets, decorative prints, and government publications. It is unclear when Desobry immigrated to the United States, but his first appearance in public records is an 1824 partnership with one Chanou, presumably also a Frenchman, in the lithographic form of Chanou and Desobry, located at 56 Exchange Place. The partnership dissolved in 1827, after which Desobry worked with Antoine Imbert, another Frenchman and one of New York City's pioneering lithographers. Later Desobry worked independently as a lithographer from his offices at the corner of Broadway and Cortlandt Street. Learn More...