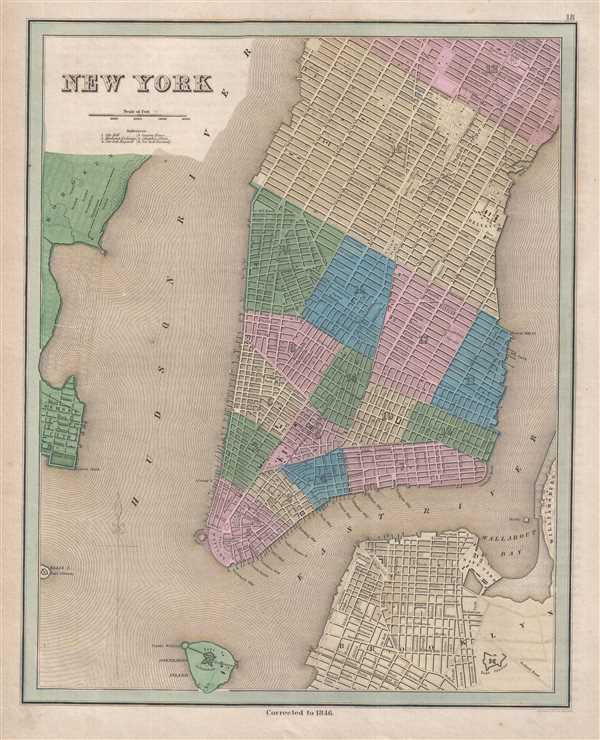 Depicts Willamsburg, Brooklyn, and New York when they were separate cities.

This is an 1846 Thomas Bradford city map or plan of New York City. The map depicts the region from Hoboken, New Jersey to the East River and Williamsburg and from Fifty-Third Street to Brooklyn and Governor's Island. At this point in New York City's history, New York, Brooklyn, and Williamsburg were each a separate entity. Williamsburg had been a part of the Town of Bushwick until it separated from Bushwick in 1840 and would remain independent until both Williamsburg and Bushwick were annexed by the City of Brooklyn in 1855 as the 'Eastern District'. Brooklyn would become part of the City of Greater New York in 1898, along with Staten Island, the Bronx, and Queens.

New York (Manhattan) is divided into sixteen wards with all of the major streets and avenues labeled from the Battery to Fifty-Third and from the Hudson River to the East River. Six locations on Manhattan are identified numerically, including City Hall, the Merchants Exchange, Columbia College (which would become Columbia University) and New York University. Each of the major squares and places is labeled, such as Washington Square, Madison Square, and Union Place, along with the Deaf and Dumb Asylum between Forty-Eighth and Fiftieth Streets on Fourth Avenue. The Harlem Railroad is illustrated in its original route along Fourth Avenue and then the Bowery to City Hall Park. Nearly one dozen slips are labeled along the East River. In Brooklyn, the city's streets are illustrated and labeled, along with the Navy Yard, the Long Island Railroad, and Fort Greene. First Street is the only street labeled in Williamsburg, although a handful of others are illustrated. Fort Columbus and Castle William are illustrated on Governor's Island, along with Fort Gibson on Ellis Island.