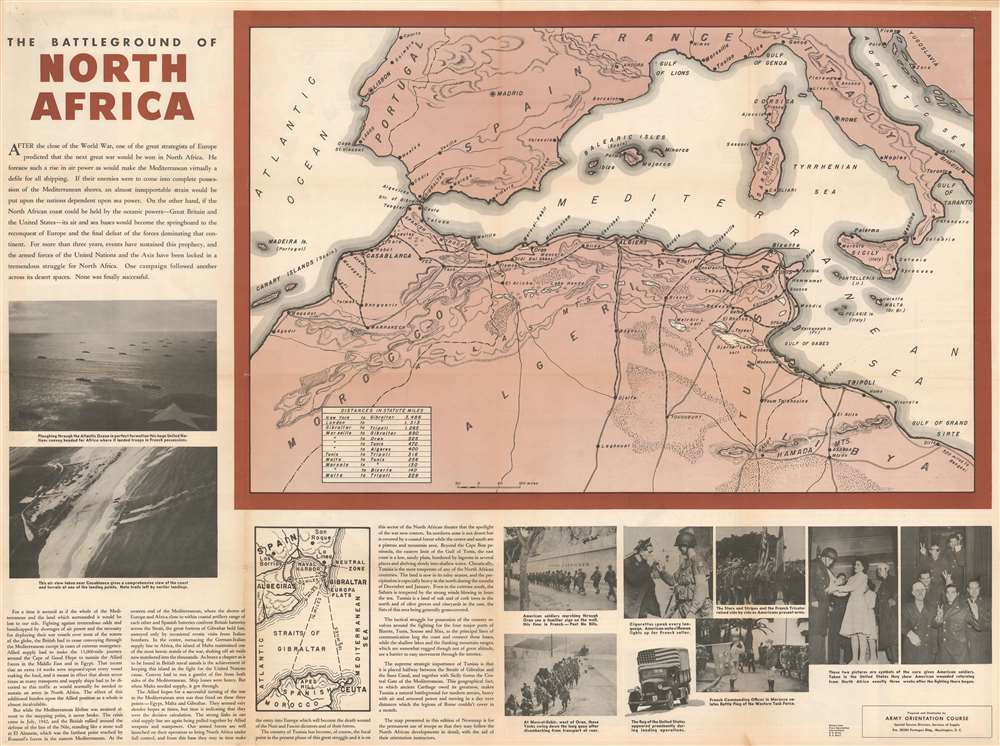 A large map of North Africa meant for U.S. servicemen to use for tracking the North African campaign.

Published a month after the Operation Torch landings in Morocco and Algeria, this 1942 Army Orientation Branch Newsmap of North Africa was distributed so Allied troops could follow the progress of the new campaign. Depicting the region from Madeira Island to Libya, the focus is placed on the area where American soldiers were fighting the Wehrmacht for the first time, likely because American soldiers were the main audience for which Newsmaps were produced. Cities and towns are identified, including the key strategic locations of Casablanca, Algiers, Oran, Bizerte, Tunis, Sfax, and Sousse. Roads and railroads are also illustrated. A table in the lower left corner of the map informs the viewer of the distances involved in getting to North Africa, with the 3,486 miles between New York and Gibraltar at the top.

While Operation Torch did not occur until November 8, 1942, the British had been fighting in the region since June 1940, following the Italian declaration of war, since the Italians occupied Libya and the British were in Egypt. This proximity allowed the British and the Italians to launch a series of offensives and counteroffensives throughout the rest of 1940, with the Italians ultimately suffering the destruction of the Italian 10th Army in December 1940. This forced Germany to dispatch Erwin Rommel and his vaunted Afrika Corps to reinforce the Italians and forestall a complete Axis defeat in the region. Rommel and the Afrika Corps fought a series of back and forth battles, with the British finally scoring a climactic victory in the Second Battle of El Alamein in Egypt in October 1942.

This set the stage for the Operation Torch landings in November, which meant Rommel and his men were stuck in a vice that would inevitably get tighter, as they were being pursued from both sides. Operation Torch and the subsequent campaign are seen historically as being a compromise, since the British did not believe that the Allies were ready in any respect to undertake an invasion of continental Europe, but the Americans were eager to get in the fight against Nazi Germany. Joseph Stalin, the leader of the Soviet Union, also had been pushing for the opening of a second front against the Germans to take some pressure off the Red Army, which the North African campaign achieved. Even if, historically, the campaign in North African campaign is viewed as a compromise, it should also be remembered as a necessity. It allowed the American armed forces time to work out their difficulties with regard to fighting a global war, and also provided the much needed base of operations for the subsequent invasions of Sicily and Italy.