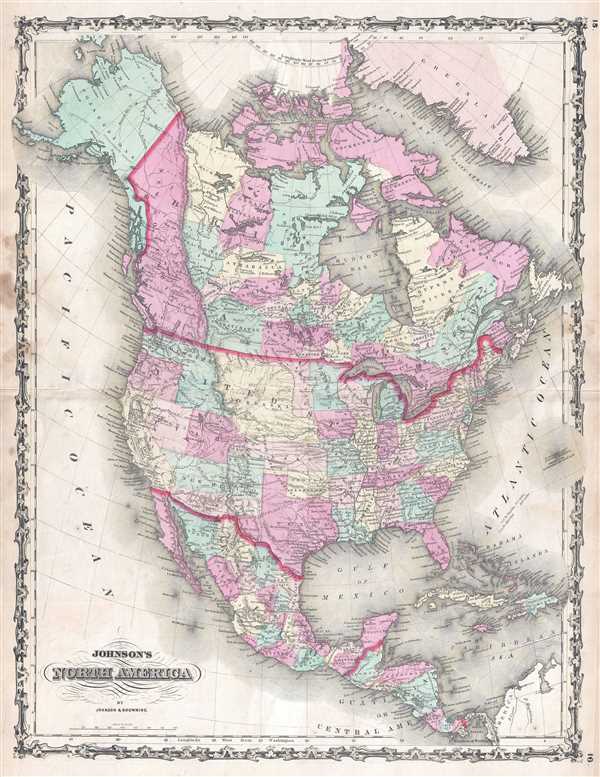 Features depictions of Nebraska at its fullest and the unincorporated Dacotah Territory.

This is a beautiful example of A. J. Johnson and Ross C. Browning's 1860 first edition map of North America. The map depicts the continent from the Pacific Ocean to the Atlantic Ocean and from the Arctic Ocean and Greenland to the Bay of Panama and South America. Created just before the outbreak of the American Civil War, Johnson's map captures a unique moment in American history, both geographically and politically. Of particular interest is the geography of the western part of the United States, where the boundaries of several territories were still undecided. By 1865, the American West would look much different than it does here in 1860.

When examining the American West as illustrated here, one of the first differences that is immediately apparent is the configuration of the Nebraska Territory. This massive Nebraska territory, incorporated in May of 1854, included most of the northern Great Plains, much of the Missouri River Basin, and the eastern part of the northern Rocky Mountains, the most land the territory would ever incorporate. By 1861, a year after this map appeared, Nebraska Territory would be significantly reduced by the formations of Colorado and Dakota Territories.

During the nearly three year period between Minnesota's statehood on May 11, 1858 and the creation of the Dakota Territory in March 2, 1861, the portion of what had been the Minnesota Territory that fell between the Missouri River and Red River, Minnesota's newly-created western border, remained unattached to any official territory of the United States. Immediately following Minnesota's statehood, a provisional government was set up in the Pembina Region which lobbied for recognition as a territory. In doing so, a formally recognized local government would be in place, which is an important part of encouraging settlement in a region. Even so, the proposal was mostly ignored by the Federal government until the Dakota Territory was formed, which upon its creation included most of present-day Montana, Wyoming, and both North and South Dakota.

Arizona would not be admitted into the Union until February 24, 1863, with very similar borders to the modern-day state. Here, the Arizona Territory is illustrated as it was proposed to Congress in late 1860, as a last-ditch attempt to avoid the American Civil War. The proposal never passed, however, because most of the members of Congress from southern states had already left Congress following declarations of secession. An Arizona Territory with these borders did secede from the New Mexico Territory in 1861 and joined the Confederacy but was soon recaptured by Union forces from California. Before creating the Arizona Territory, it was decided that the New Mexico Territory would be divided by a vertical border, so that both territories would benefit from the proposed transcontinental Southern Pacific Railraod.

Other territorial boundaries in the western United States that do not conform with today's states are illustrated as they were laid out upon the territory's creation. Both the Utah Territory and the Washington Territory were created just as they are illustrated here. West Virginia, in the east, would not come into existence until until 1862, after it seceded from Virginia because its citizens disagreed with seceding from the Union.

On a more general note, each state that had been admitted to the Union by 18606 is illustrated, labeled, and shaded a different color to allow for easy differentiation. State capitals are labeled, along with numerous other cities and towns throughout the country. The rail network is also depicted and would play a key role in the coming war between the Union and the Confederacy. Several Native American tribes are named west of the Mississippi River, including the Pawnee, Crow, Navajo, and Apache.

Outside the United States, Canada is illustrated as a collection of regions and provinces and would not begin to unite until the Canadian Confederation of 1867. Alaska is labeled as 'Russian Possessions', as this map predates the American purchase of Alaska from Russia. Each of the different countries in Central America are illustrated and labeled, and states are labeled and shaded different colors in Mexico.

The whole is surrounded by the strapwork border used for Johnson's atlas maps from 1860 to 1863. Published by A. J. Johnson and Ross C. Browning as plate nos. 15 and 16 in the 1860 first edition edition of Johnson's New Illustrated Family Atlas.