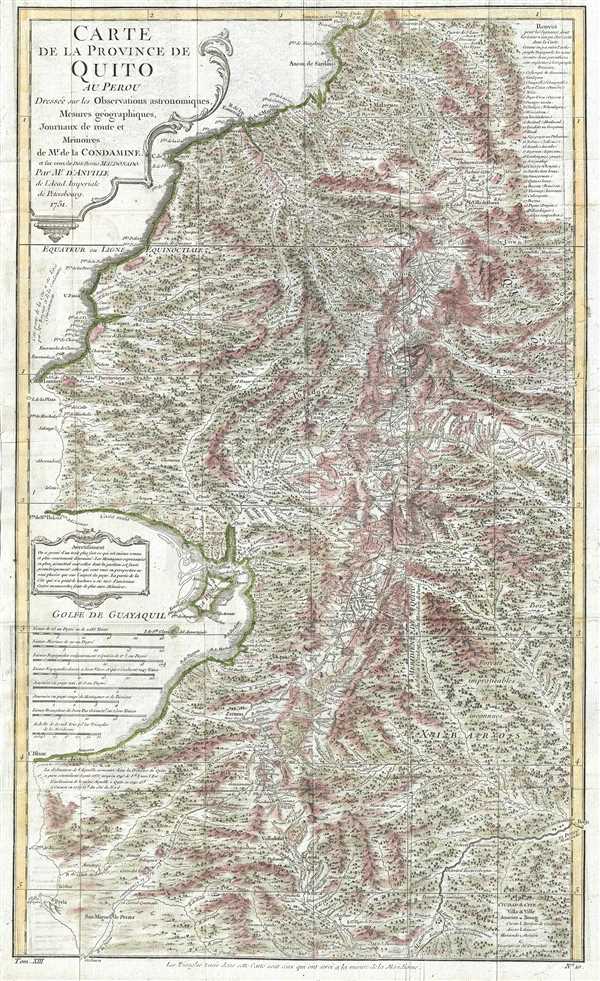 Rare and historically important map of Ecuador and the Spanish-French Geodesic Mission.

This is a 1751 Charles Marie de la Condamine and Jean-Baptiste Bourguinon d'Anville map of Ecuador and Peru. This map details, with incredible precision, the area which the Spanish called the Province of Quito, which covers parts of modern day Colombia, Ecuador, and Peru. The map stretches from Barbacoas, Colombia in the north, south past Quito and Guayaquil, Ecuador, into central Peru, and from the Pacific coast into the interior, which d'Anville considered 'impassable and unknowable woods and forests.' It includes the Andes and innumerable rivers and streams, as well as villages, towns, and cities of varying sizes.

The purpose of this map is to present the information gathered by the Spanish-French Geodesic Mission to Ecuador, which left France in 1735. The expedition was led by Charles Marie de la Condamine, Pierre Bouguer, and Louis Godin, three French astronomers, and Jorge Juan y Santacilia and Antonio de Ulloa, who were Spanish geographers. Pedro Vicente Maldonado, an Ecuadoran geographer, joined the group in Ecuador. The purpose of the expedition was to determine the shape of the Earth: whether it was oblate (flattened at the poles, proposed by Sir Isaac Newton) or prolate (flattened near the Equator, as proposed by René Descartes). They would do so by measuring the arc of a meridian with precise triangulation surveys over three degrees of latitude – from the Equator to three degrees south, or from Quito to Cuenca. This resulted in this section of Ecuador becoming one of the most highly accurately mapped corridors of the Americas. The triangulation surveys are shown on this map.

The Spanish-French Geodesic Mission was the first truly international scientific expedition. The goal was to be able to put aside nationalist rivalries for the good of scientific exploration. Upon returning from South America, it was decided that this map, which was originally drawn by Maldonado, should be published. This was unusual, because the map was 'owned' by the Spanish government, which did not make a habit of publishing detailed maps of their possessions, in the belief that, if published, the maps could potentially aid an enemy in a war. Nevertheless, due to its scientific importance, this map was set to be published, and sent to Paris, where Condamine and d'Anville were given the task. Maldonado made the trip to Paris, but left to continue his research, and tragically passed away in 1748. Condamine and d'Anville were left to finish the map without him. Before the map could be officially printed, however, the Spanish government changed their mind, and demanded the return of all the plates and printed copies of the map. Condamine succeeded in delaying the Spanish long enough to have this plate finished and prints made, inscribing that it was published by the Imperial Academy in St. Petersburg. The other plates were changed and returned to the Spanish.

This map was drawn by Jean-Baptiste Bourguinon d'Anville, one of the most celebrated French cartographers, and engraved by Guillaume Delahaye. D'Anville was truly the first modern cartographer. Unlike many of his contemporaries and predecessors, d'Anville based his maps on intense study and research. His maps were also the most accurate and comprehensive of the period. This map was commissioned by Mr. de la Condamine to be included in his Journal du voyage fait par ordre du roi à l'équateur, servant d'introduction historique à la 'Mesure des trois premiers degrés du méridien', which was published in Paris by l'Imprimerie Royale in 1751.