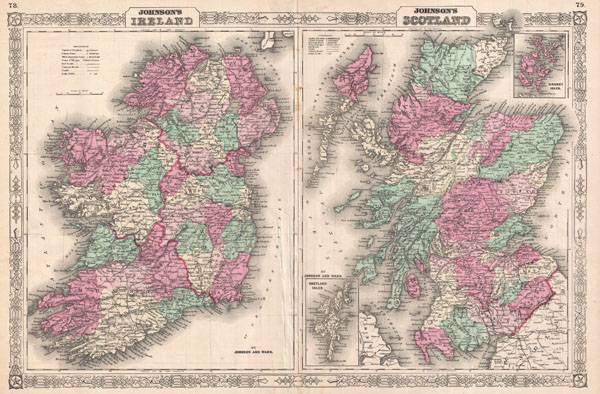 This is Johnson and Ward's 1866 map of Ireland and Scotland. Essentially two maps on one sheet with the left hand map covering Ireland and the right hand map covering Scotland. Both regions are divided into their constituent counties and districts with towns, cities, roads, and railways noted. The Scotland map features two insets detailing the Shetland and Orkney Islands, respectively.

Surrounded by the fretwork style border common to Johnson's atlas maps issued between 1863 and 1869. Steel plate engraving prepared by A. J. Johnson for publication as plates no. 78 and 79 in the 1866 edition of his New Illustrated Atlas… This is the last edition of the Johnson's Atlas to bear the Johnson and Ward imprint.

Good. Verso repair and reinforcement on centerfold. There are two notable closed verso repairs. The first is a large closed tear of about 7 inches running perpendicular to the centerfold. The second is a smaller closed and repaired tear, from margin extending about 2 inchs into the printed zone. Neither stand out from the recto or map side of the sheet. Even overall toning.
Looking for a high-resolution scan of this?