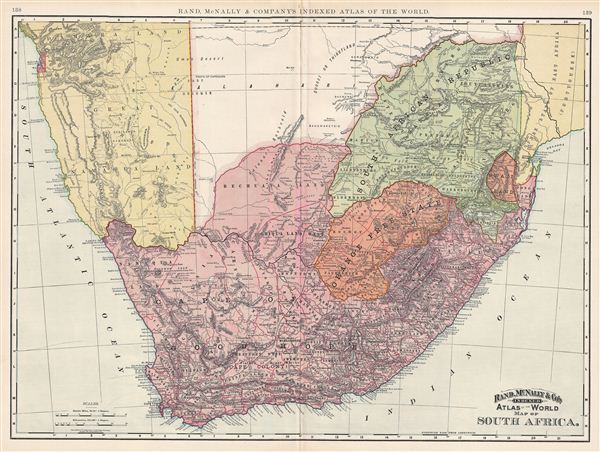 This is a beautiful example of Rand McNally and Company 1892 map of South Africa. It covers the modern day countries of South Africa, Lesotho and Swaziland, along with parts of adjacent Mozambique, Namibia, and Botswana (Bechuanaland). After the discovery of diamonds in 1867 and gold in 1884, colonial powers and the indigenous population struggled to control South Africa's resources. This led to the First Boer War in 1880 in which the British were defeated. The British were however victorious in the Second Boer War (1899 - 1902) against the Dutch settlers, which led to the South African Republic (Transvaal) and the Orange Free State being annexed to the British Union of South Africa. Color coded according to region and territories, this map identifies numbers cities and towns, as well as notating rivers, mountains and various other topographical features. Relief shown by hachure. This map was issued as plate nos. 138 and 139 in the 1895 issue of Rand McNally and Company's Indexed Atlas of the World - possibly the finest atlas Rand McNally ever issued.