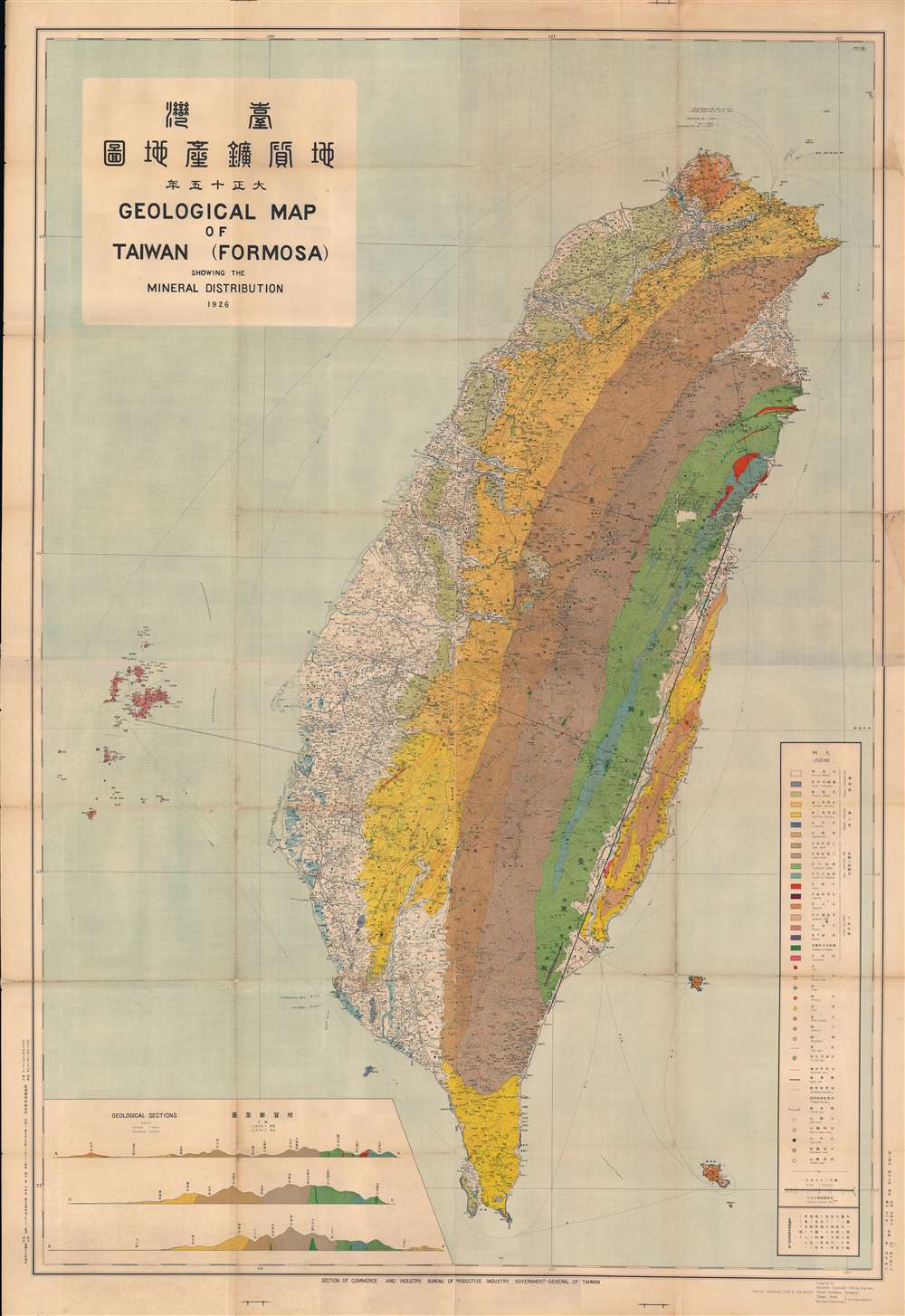 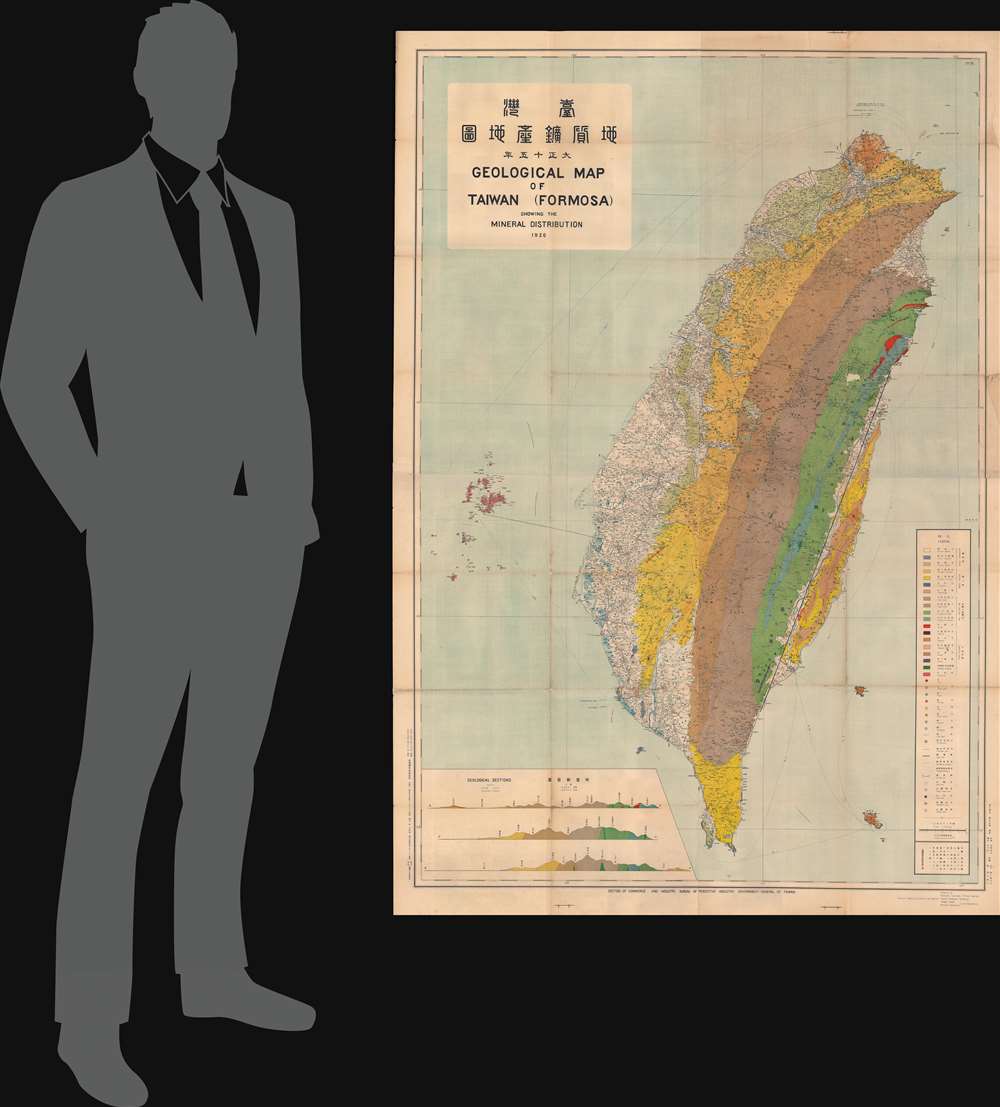 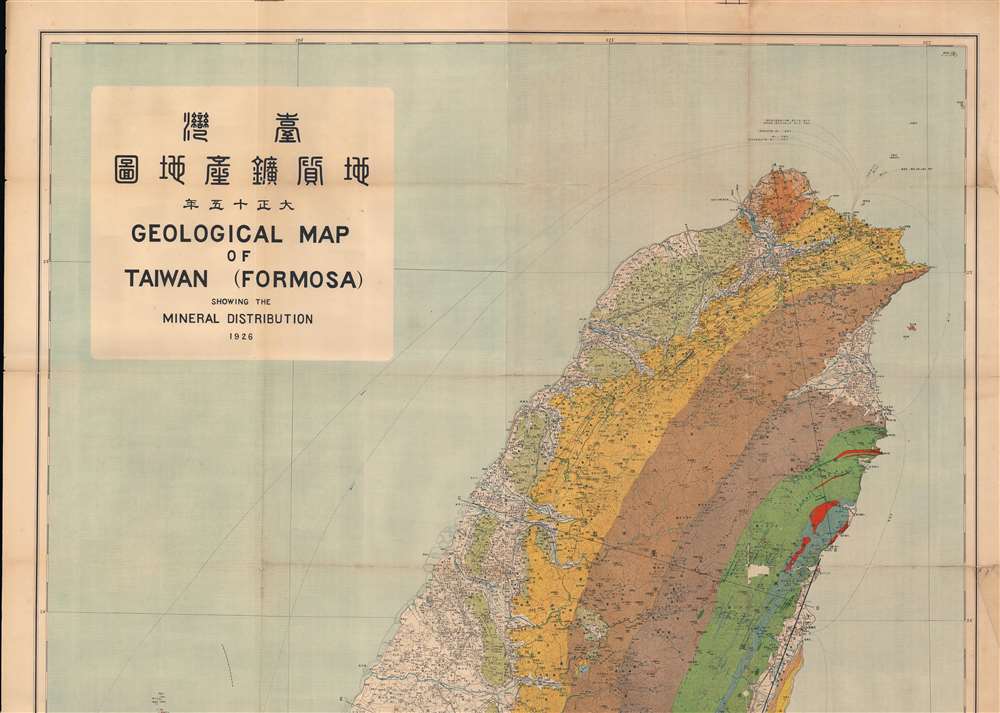 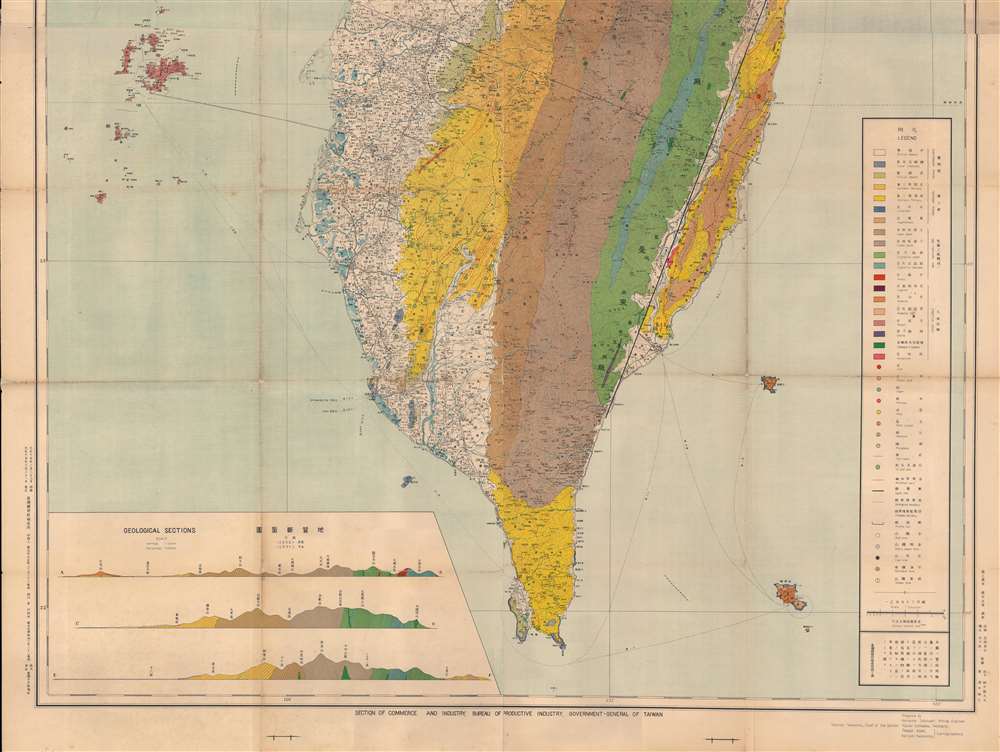 This is a very rare bilingual geological wall map produced in 1926 by the Government-General of Taiwan, showing the distribution of minerals in the Japanese colony.

The map shows the distribution of various rock types, minerals, and related resources throughout Taiwan (including surrounding islands). Worth noting are numerous mines (especially coal mines) around Taipei (Taihoku), as well as the green dots scattered around the island's central and southern portion, representing oil and gas. At bottom-left is a cross-section of Taiwan's topography with prominent mountains and features indicated. Shipping routes, their distances, and their destinations are noted on the map in Japanese but not in English.

The Japanese Empire gained control of Taiwan from the Qing Dynasty in the Treaty of Shimonoseki (April 17, 1895) at the end of the First Sino-Japanese War (1894 - 1895). Despite periodic unrest throughout the colonial period (1895 - 1945), Taiwan was seen as a 'model colony' because of its economic usefulness to the empire and the relative success of policies to inculcate a sense of Japanese identity among the island's population.

This map dates from the peak of the 'colonial modernity' era. Japan's colonial venture in Taiwan can be viewed in the context of hte 'civilizing mission' of Western empires in their showcase colonies, and revolved around compulsory public education, sanitation and public health, infrastructure, urban planning, changes in manners and mores, and economic development. The documentation and management of mineral resources were important pieces of this wider colonial project, and to Japan's war effort.

Taiwan was also important for Japan economically, serving as a major source of agricultural goods and raw materials. As a mountainous archipelago with limited resources, including arable land, Japan was dependent on its empire for survival. In the case of Taiwan, various foodstuffs, camphor (useful for a variety of medical, industrial, and military applications), and minerals were the main exports.

Mining was a central feature of Taiwan's colonial economy. Early in the colonial period, Japanese surveyors were sent into the mountainous, aboriginal regions south of Taipei, which had remained mostly uncontrolled and unmapped by the Qing. Highland aborigines were confined to tightly-policed cordons so that the natural resources of these areas could be exploited. Aboriginal resistance to Japanese encroachment occurred throughout the colonial period, resulting in several extremely brutal military campaigns.

This map was printed on March 28, 1926 (Taisho 15) and distributed on March 31. It was prepared by bureaucrats of the Section of Commerce and Industry, Bureau of Productive Industry, Government-General of Taiwan (臺灣總督府殖產局商工課). Within the section, the contributors to the map were cartographers Asahi Tōdayū (朝日藤太夫) and Hamamoto Katsumi (濱本勝巳), geologist Ichikawa Yūichi (市川雄一), mining engineer Takahashi Harukichi (高橋春吉), and the section chief Yokomitsu Yoshinori (橫光吉規). The map was printed by Egawa Hajime (潁川首) of the Taiwan Nichinichi Shinpōsha (臺灣日日新報社). An accompanying Geological Map of Taiwan Manual (臺灣地質鑛產地圖說明書) was published in tandem, but is not included here. This map is held by the National Diet Library and Kyushu University in Japan, along with the Academia Sinica and National Museum of Taiwan History in Taiwan.

Government-General of Taiwan (臺灣總督府; 1895 - 1945) was the Japanese colonial government established to govern Taiwan, which was granted to Japan by the Treaty of Shimonoseki at the end of the First Sino-Japanese War. The Government-General resided in Taipei (Taihoku) and worked to turn Taiwan into a 'model colony,' building schools, police stations, railways, and mines at a rapid pace. Learn More...


Hamamoto Katsumi (濱本勝巳; fl. c. 1926 - 1938) was a Japanese cartographer in the service of the Bureau of Productive Industry, Government-General of Taiwan (臺灣總督府殖產局) who contributed to a number of maps dealing with natural resources in the colony. Learn More...


Asahi Tōdayū (朝日藤太夫; fl. c. 1925 – 1927) was a Japanese cartographer in the service of the Bureau of Productive Industry, Government-General of Taiwan (臺灣總督府殖產局). Learn More...


Ichikawa Yūichi (市川雄一; fl. c. 1926 - 1935) was a geologist in the service of the Bureau of Productive Industry, Government-General of Taiwan (臺灣總督府殖產局) who contributed to geologic maps of Taiwan and maps of several cities in Taiwan during the colonial period. Learn More...


Egawa Hajime (潁川首; fl. c. 1926 - 1938) was a printer and writer in the service of the Taiwan Nichinichi Shinpōsha who contributed to a number of maps of Taiwan and guidebooks for travelers to the island colony. It is possible that this individual was Chinese, in which case their name would read Yingchuan Shou. Learn More...

Good. Wear and some loss along fold lines.