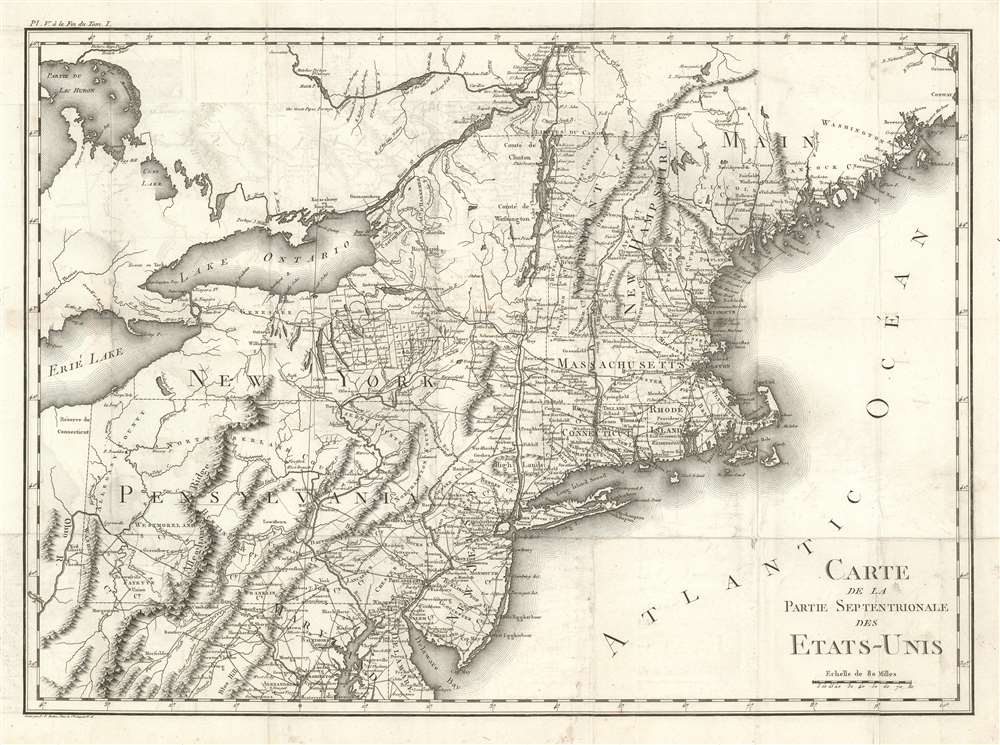 An important and highly detailed 1801 map of the northeastern United States by Pierre Francis Tardieu. The map was issued to a accompany Michel Guillaume de Crevecoeur's Le Voyage dans la Haute Pennsylvania et dans l'État de New-York, one of the most important post-Revolutionary War books about life and economy in the fledgling United States. Coverage extends from Maine to the District of Columbia and west as far as Ohio and the Connecticut Reserve, including modern-day New England, New York, New Jersey, Pennsylvania, and parts of Maryland, Delaware, and West Virginia. The map is notable for its exceptional detail, naming towns and roads, as well as surveyed military tracts intended to compensate Revolutionary War soldiers for their war effort.

The Military Tract of Central New York, also called the New Military Tract, consisted of nearly two million acres (8,100 km2) of bounty land set aside in Central New York to compensate New York's soldiers for their participation in the Revolutionary War. Soldiers were guaranteed 500 acers each from the newly laid down tracks. These lands were carefully surveyed out in the Finger Lakes region of New York - north of Oswego and west of Cooperstown, covering the modern-day counties of Cayuga, Cortland, Onondaga, and Seneca, and parts of Oswego, Tompkins, Schuyler and Wayne. Apparently at the whim of Robert Harpur, a clerk in the office of New York's Surveyor General, the new townships were named after figures from classical antiquity, including Greek and Roman statesmen and the Carthaginian general Hannibal.

At the far western section of the map, on the shores of Lake Erie, the Connecticut Western Reserve is noted. This section of northeastern Ohio, rarely seen on maps, was ceded to Connecticut by King Charles II in exchange for Westmoreland County, Pennsylvania, following the Yankee-Pennamite Wars. Connecticut gave up its claims to the Western Reserve in 1800, when they were sold to the Connecticut Land Company, a group of speculators based in Suffield, Connecticut. Surveyors were sent out, under Moses Cleveland, to divide the reserve into township and found the city of Cleveland, first known as 'New Salem.'

This map was engraved in Paris by Pierre Francis Tardieu for inclusion in Michel Guillaume de Crevecoeur's Le Voyage dans la Haute Pennsylvania et dans l'État de New-York. Despite being his longest and most comprehensive work on the Americas, it never attained the popularity of the 1784 Letters d'un Cultivateur Américain. There were multiple editions of the book, but only one of the map. Today this map is uncommon on the market and its significance often underappreciated. The OCLC identifies 3 examples of the separate maps.