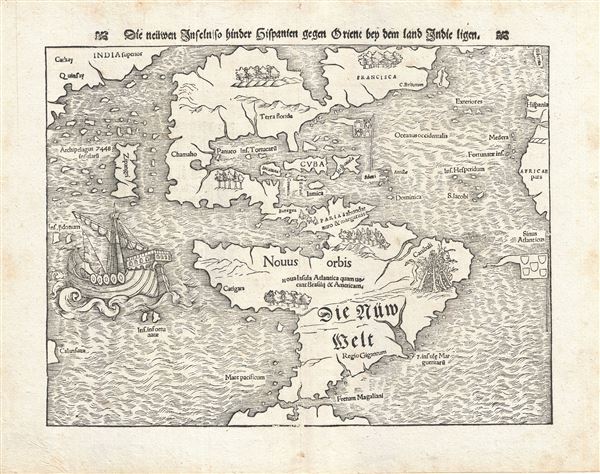 A fine 1554 example of Sebastian Munster's map of America or the New World. This is one the earliest and most influential obtainable maps of the Americas. This is the first specific published map to reveal all of North and South America in clear continental form. Munster originally published this map in his 1540 Basle edition of Ptolemy's Geographia. The work proved popular appearing in some 40 editions over the subsequent century. The popularity of Munster's Geographia and this map in particular made this map highly influential in establishing a number of important cartographic conventions, such as the naming of America as such, the identification of the Straits of Magellan, the naming of the Pacific Ocean (Mare Pacificum), the presumed insular form of the Yucatan, and the speculation of Verazanno's Sea. It is moreover, this is the earliest printed map to identify Japan, here presented according to Marco Polo as 'Zipangri.'

Munster's map covers all of North and South America presenting both in continental form. North America is largely speculative although the Caribbean region is recognizable with Cuba, Jamaica, St. Paul, Cozumel, Yucatan, Dominica, and Hispaniola identified. A Spanish flag flies over the region promoting the notion of European hegemony over the Americas. In North America Florida is recognizable in form and the region as a whole is identified as 'Terra Florida.' Further north another territory, defined as Francisca, is identified. This references Francis I, the French King who sponsored Verrazano's expedition. 'C. Britonum' is a reference to Cabot's expedition and is most like Cape Breton. The nearby island of Corte Real is possibly 'Terra Nova do Bacalhau' (New Land of the Codfish) supposedly discovered by the Portuguese navigator Joao Vaz Corte-Real in 1473. If so, he may have discovered Newfoundland nearly 20 years before Columbus. For his achievement he was granted land in the Azores.

South America is more recognizable. This map features a very early appearance of the Straits of Magellan as well as a presentation of Magellan's ship Victoria, the only one of 5 to survive, in the Pacific Ocean (Mare Pacificum), which also appears for the first time on a printed map. Catigara, a city typically located in East Asia by Ptolemaic geographers, has here been relocated to the western coast of South America near modern day Peru. On the east coast of South America, in modern day Brazil, anthropophagi (Canibali) are identified and accompanied by a particularly gruesome image of human body parts, including a head and leg roasting over a fire. Patagonia is identified as 'Regio Gigantum.' Just off the easternmost coast of modern day Brazil a Portuguese flag appears. Across the whole, the texts 'Nouus Orbis' and 'Die Nuw Welt' (New World) are written.

As we have noted before, this is the earliest printed map to use the term 'Pacific' to describe the Ocean to the west of America. Munster most likely theorized that this ocean was an extension of Ptolemy's Indian Ocean - a fact also suggested by his placement of 'Catigara.' Into this largely unexplored ocean he introduces the Ins. Pdonum, according to Suarez, a corruption of Magellan's 'Ladroni' or 'Thieves' Island,' today's Guam and Rota. He also identifies 'Calensuan,' which Suarez suggests may be a corruption of 'Ceylon.' In another work Suarez suggests, in revision, that 'Calensuan' was one of the islands visited by Magellan's crew after the man himself was slain on Cebu. Further north an archipelago of 7448 islands surrounds 'Zipangri.' This is Japan as referenced by Marco Polo. It is noteworthy that this is the earliest appearance of Japan on a printed map and considerably predates any European contact with the island nation.

The present example represents the 7th state of Munster's map, prepared in 1554 for issue in the 1556 German edition of the Geographia. It is identifiable as such by as the first variant on this map to remove 'Temistitan' (Mexico City), previously located below 'Chamaho.' The presence of the word 'Sciana' at the foot of the Spanish flag confirm the state.

Sebastian Münster (January 20, 1488 - May 26 1552), was a German cartographer, cosmographer, Hebrew scholar and humanist. He was born at Ingelheim near Mainz, the son of Andreas Munster. He completed his studies at the Eberhard-Karls-Universität Tübingen in 1518, after which he was appointed to the University of Basel in 1527. As Professor of Hebrew, he edited the Hebrew Bible, accompanied by a Latin translation. In 1540 he published a Latin edition of Ptolemy's Geographia, which presented the ancient cartographer's 2nd century geographical data supplemented systematically with maps of the modern world. This was followed by what can be considered his principal work, the Cosmographia. First issued in 1544, was the earliest German description of the modern world. It would become the go-to book for any literate layperson who wished to know about anywhere that was further than a day's journey from home. In preparation for his work on Cosmographia, Münster reached out to humanists around Europe and especially within the Holy Roman Empire, enlisting colleagues to provide him with up-to-date maps and views of their countries and cities, with the result that the book contains a disproportionate number of maps providing the first modern depictions of the areas they depict. The book, unsurprisingly, proved popular and was reissued in numerous editions and languages including Latin, French, Italian, English, and Czech. The last German edition was published in 1628, long after Münster's death of the plague in 1552. Cosmographia was one of the most successful and popular books of the 16th century, passing through 24 editions between 1544 and 1628. This success was due to the fascinating woodcuts (some by Hans Holbein the Younger, Urs Graf, Hans Rudolph Manuel Deutsch, and David Kandel). Münster's work was highly influential in reviving classical geography in 16th century Europe, and providing the intellectual foundations for the production of later compilations of cartographic work, such as Ortelius' Theatrum Orbis Terrsrum Münster's output includes a large format 1536 map of Europe; the 1532 Grynaeus map of the world is also attributed to him. His non-geographical output includes Dictionarium trilingue in Latin, Greek, and Hebrew, and his 1537 Hebrew Gospel of Matthew. Most of Munster's work was published by his son-in-Law, Heinrich Petri (Henricus Petrus), and his son Sebastian Henric Petri.