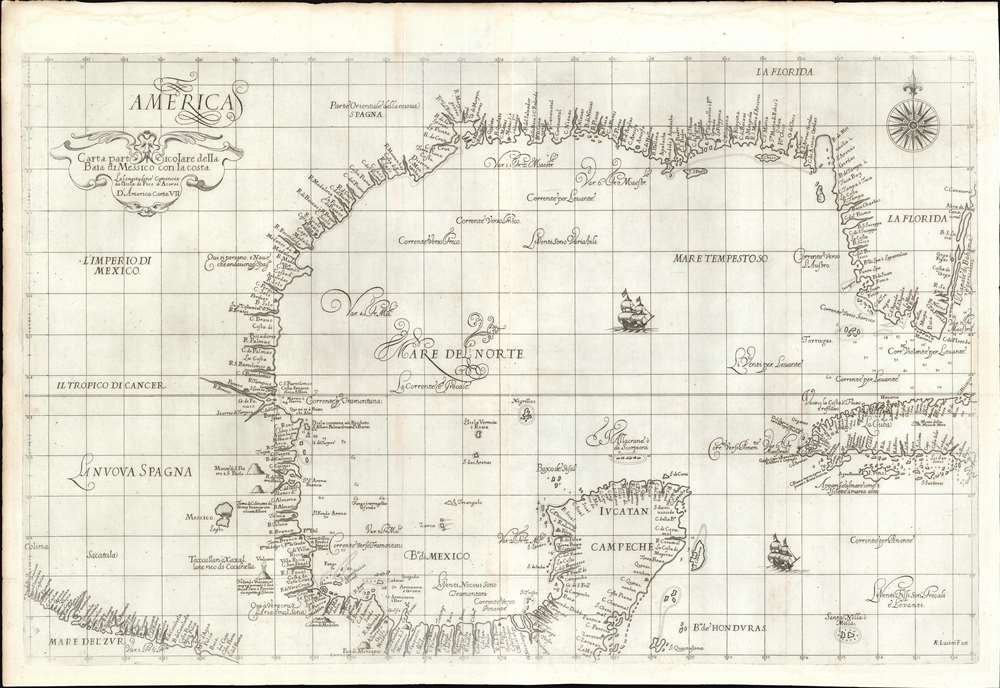 A seminal production, this is a fine first-edition first-state of Sir Robert Dudley's 1645 - 47 maritime map of the Gulf of Mexico, considered the first published nautical chart of that region. It is also the first to be printed using Mercator's Projection - thus making it the first to be practical for actual navigation. Likewise it is also the first to accurately indicate prevailing winds and ocean currents in the Gulf. Coverage extends from the Pacific Coast of Mexico to eastern Florida, and from Galveston Bay (Texas) to modern day Belize and the Bay of Honduras), inclusive of the Yucatan Peninsula and western Cuba. The whole is stunningly engraved in Antonio Francesco Lucini's masterful Italian baroque hand, complete with fine calligraphy and idiosyncratic styling.

Recognizing Toponomy on the Map

Many of the place names scattered throughout the map are not recognizable, even for historians, but we can identify the major colonial centers of Mexico City, Havana, Veracruz, Acapulco (Aqua Pulca) and Campeche. Burden has helped to identify some of the major rivers and bays,

The true location of the bay into which the R: di Sa. Spirito flows is strongly debated. Generally, it is believed to represent the mount of the Mississippi River; however, some authorities argue that it represents Galveston Bay. It is more likely that it has been used for both. The maps drawn following the Hernando do Soto expedition of 1539 - 43 clearly identified it as the former. Other rivers are believed to be as follows: R:Montanhas (Sabine River), R:d'Ouro (Trinity River) and R:Madalena (Nueces River). The author believes that the R:Escondido represents the Rio Grande.

. Other recognizable features are the erupting volcano between Mexico City and Veracruz, which can only be Popocatépetl or Citlaltépetl. To the southwest of Cozumel (Cozumes) Island (with safe anchorage), there is a ruin, which is mostly likely the ancient Mayan ruins of Tulum, which can be seen from the sea.

In Florida, Tampa bay is recognizable, as are eastern Florida's barrier islands between Cape Canaveral and Key Largo (not named). He notes B. di Juan Fonce, probably Charlotte Harbor, the site along Florida's Gulf Coast where Ponce de Leon landed during his 1513 expedition. On the east coast, B:S:Lucia, roughly corresponds to modern day Biscayne Bay and the vicinity of Miami. The Dry Tortugas are noted, both as a safe anchorage and as a cluster of islands, but there is limited evidence of the Florida Keys. The description does, nonetheless, note violent winds and depth soundings all around southern Florida. The Gulf Coast is dotted with settlements, most of which are impossible to identify, but may relate to either visited American Indian settlements or reference early unrecorded navigation in this region.

Dudley does not note his sources, but spent a lifetime collecting and correcting maps before publishing this and the other maps in the Dell'Arcano del Mare. He did visit the Caribbean at least once, so may have collected firsthand manuscript charts and other data on that voyage. Moreover, Dudley was active at the highest echelons of society, both in England and Florence, and thus had access to otherwise forbidden cartographic data. His close friendships included such figures important maritime figures as Thomas Cavendish, Sir Frances Drake, and Sir Walter Raleigh.

This map was completed by Sir Robert Dudley in manuscript form c. 1636. It engraved subsequently engraved in an Italian baroque style by Antonio Francesco Lucini, and printed in Florence in 1647. According to Burden, it was not published until 1648, in the sixth volume of Dudley's Dell'Arcano del Mare. Burden suggests a single state, but other evidence suggests that a second state was issued in the 1660s. The present example is the first-state, first-edition.

Sir Robert Dudley (August 7, 1573 - September 6, 1649) was an English explorer and cartographer, the publisher of the Dell’Arcano de Mare, one of the greatest nautical atlases of all time. He was the illegitimate son of Robert Dudley, 1st Earl of Leicester (a favorite of Queen Elizabeth I) and Douglas Sheffield, the widow of John Sheffield, 2nd Baron Sheffield. In 1594, Dudley led an expedition across the Atlantic, with the intent of harassing Spanish merchantmen. His expedition met with a series of misfortunes, but successfully returned to England the following year. In 1596, Dudley joined an expedition led by Robert Devereux, 2nd Earl of Essex, against Cadiz. He served as the commander of the Nonpareil, and was knighted for his conduct in the capture of Cadiz. In 1603, Dudley made an attempt to establish his legitimacy at court and gain several inheritances, after being (possibly erroneously) informed that his parents had been secretly married. No concrete proof of the marriage could be furnished, thus the judgement was handed down against him in May 1605. Dudley left England in July of the same year, with his lover and cousin Elizabeth Southwell, who was disguised as his page. They married in Lyon in 1606 having receiving a papal dispensation. The couple settled in Florence, where Dudley began using his father’s title, Earl of Leicester, and his uncle’s, Earl of Warwick. In Florence, Dudley designed and built warships for the arsenal at Livorno and became a naval advisor to Ferdinand I, Grand Duke of Tuscany. In 1607, James I revoked Dudley’s travel license once ordered that he return to provide for his deserted wife and family. Dudley refused, was subsequently labeled an outlaw, and his estate was confiscated. By far Dudley’s most import work was the Dell’Arcano del Mare (Secrets of the Sea). His most celebrated achievement, is the atlas of sea charts of the world which is part of the work. This maritime atlas was the first nautical atlas of the entire world in print, the first made by an Englishman, the first to show prevailing winds and currents, and the first to use the Mercator projection.


Antonio Francesco Lucini (January 1, 1610 - 1661), a.k.a. Anton, was an Italian engraver and printmaker. Lucini was born in Florence born in 1605. Lucini initially studied engraving with Stefano della Bella (1610 - 1664) under Jacques Callot (c 1592 - 1635), who lived in Florence from 1612 to 1621. He is recorded in 1616 as Callot's assistant in Florence. After 1621, he joined flowed Callot in Nancy to continue his training. He returned to Florence sometime before 1631, when he published a series of plates on the Great Siege of Malta. He is best known in cartographic circles as the engraver for Sir Robert Dudley's seminal maritime atlas Dell'Arcano del Mare (Of the Mysteries of the Sea), published in Florence in 1645 - 1646. The 200 engraved plates and 146 charts which Lucini produced for Dudley occupied 12 years occupied 12 years of his life and consumed some 5000lbs of copper. The engravings exhibit Lucini’s masterful craftsmanship and are outstanding examples of Italian Baroque engraving. Indeed, while Dudley was a master chartmaker, it is Lucini's virtuoso engraving and fine calligraphy that most define Dudley's work.