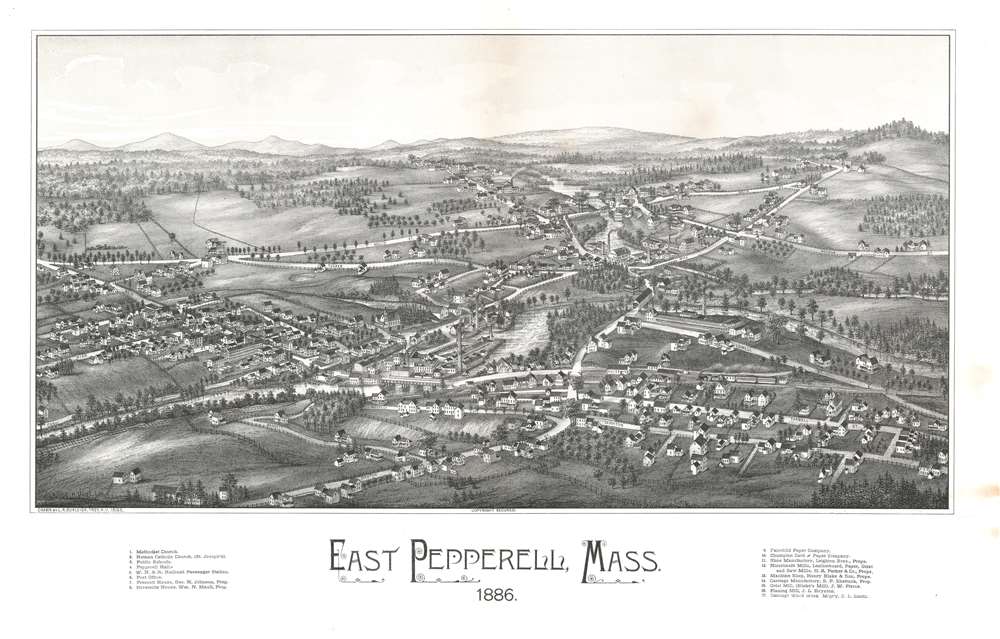 Includes an illustration of the Pepperell Covered Bridge.
$1,200.00

This 1886 Lucian Rinaldo Burleigh bird's eye view map of East Pepperell, Massachusetts provides a look at a modern-day community near the end of the 19th century. Overlooking East Pepperrell from the southeast, several roads that still exist in town are illustrated and labeled, including Groton Street, Leighton Street, Mill Street, Tucker Street, and Hollis Street. Both the Nissitissit and Nashua Rivers are illustrated, and the Pepperell Covered Bridge across the Nashua River is illustrated to the right of center. Seventeen locations throughout town are numerically identified and correspond to an index below the bottom border, including several mills, two paper companies, the post office, train station, and public school.

A bridge has existed at the same location since 1740, although it has been rebuilt a few times. The bridge was the site of an important local event during the American Revolution. Not long after the beginning of the war, a Patriot named Prudence Cummings Wright and the other women in her Patriot network stopped Prudence's brother (a Tory) and his friend from disclosing the location of a cache of Patriot gunpowder at the bridge. The women unhorsed the two men and searched them, finding incriminating dispatches meant for the British. Both men were held at a local tavern overnight and then taken to the local Committee of Safety the following day. Their ultimate fate, however, has been lost to history.

This view was drawn by Lucian Rinaldo Burleigh and engraved and printed by Charles H. Vogt in 1886. The OCLC records examples in the institutional collections of the Library of Congress and Pennsylvania State University. We are also aware of an example in the collection of the Normon B. Leventhal Map Center at the Boston Public Library.