1862 Japanese Sato Seiyo Map of the World on Mercator Projection 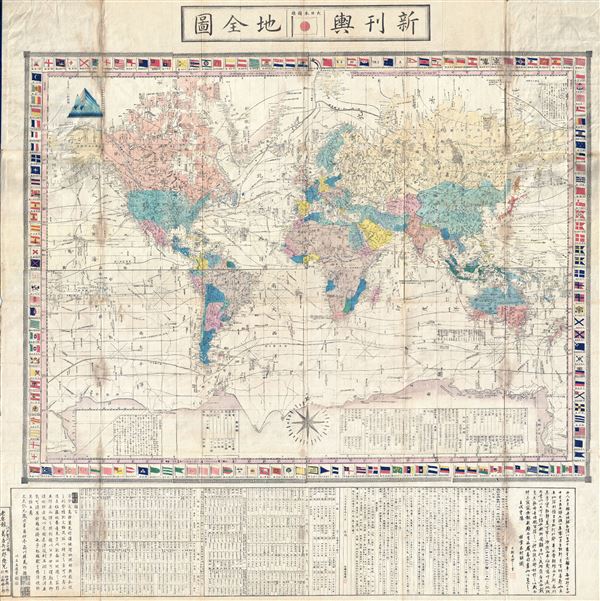 1862 Japanese Sato Seiyo Map of the World on Mercator Projection

The first Japanese map of the World on a Mercator Projection.
$4,250.00

An impressive 1862 (Bunkyū 2) Japanese map of the world by Seiyo Sato. This is an enormous and graphically impressive map covering the entire world on Mercator's projection and surrounded by 159 flags of various foreign nations. It identifies the routes of various explorers throughout with extensive annotation along the bottom of the map prepared by Sato Masayaoshi in 1861. All text is in Sino-Japanese characters, as was standard when this map was issued. While apparently outdated when compared to European maps of the period, this map was revolutionary in Japan where it was the first map to be issued on a Mercator Projection - thus ushering in a new global perspective in Japanese cartography. The text claims that this map follows an 1857 map of C. F. Sammler - most likely introduced to Japan by Dutch arms dealers in Yokohama, Edward and Henry Schnell, but we have not been able to identify this source map. It was engraved by Takeguchi Ryuzaburo and Kamimura Fukusaburo. The extensive annotation was composed by Tobikawa Yoshikuni and Kimura Takeshi. It was published by Yorozuya Heishiro in Edo. While occasionally appearing in institutional collections, this map is extremely rare with no record on the private market.

Very good. Minor traditional repairs along some folds. Else clean.