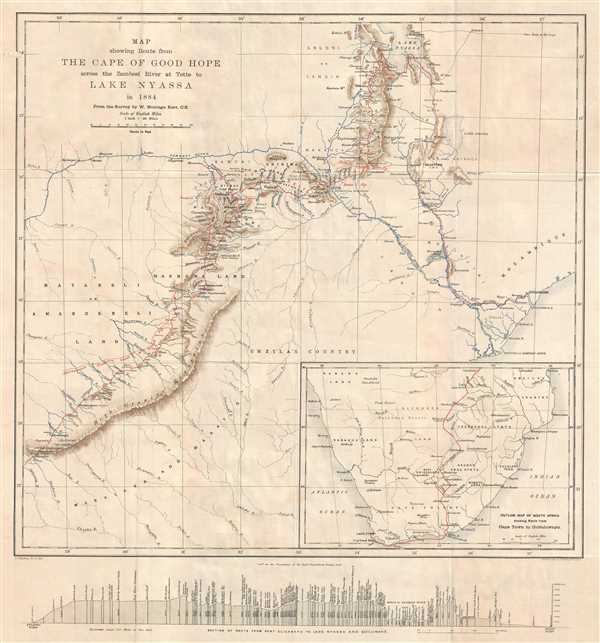 This is an 1886 Walter Montagu Kerr map of southeastern Africa which depicts his journey to Lake Malawi from Port Elizabeth, South Africa. The map stretches from Zimbabwe to Lake Malawi, labeled here as Lake Nyassa, and from the Zambezi River to the Pacific coast of Mozambique. An inset map at the bottom right corner presents his journey from Cape Town through Port Elizabeth to Gubuluwayo. The central map depicts the route from Gubuluwayo across Africa to the Zambezi River and on to Lake Nyassa. A highly-detailed depiction of the region, the map labels the different, though ill-defined, tribal lands encountered by Kerr. Towns and villages are labeled, as well as myriad rivers all along the route. The course of the Zambezi is traced across the entirety of the map, from the left border across the map to its mouth along the right border.

The map accompanied an article printed in the Proceedings of the Royal Geographical Society and Monthly Record of Geography entitled, 'A Journey from Cape Town Overland to Lake Nyassa.' The article, originally read at a meeting of the Royal Geographical Society, recounts Kerr's travels through the region. Several of the locations described in the paper are marked on the map, allowing the reader to easily trace Kerr's progress toward Lake Malawi.

This map was created by W. Montagu Kerr and published by W. and A.K. Johnston in the February 1886 issue of the Proceedings of the Royal Geographical Society and Monthly Record of Geography.

Royal Geographical Society (fl. 1830 - present) is a British Society established in 1830 to promote geographical science and exploration. Originally titled the "Geographical Society of London", the RGS received its royal charter from Queen Victoria in 1859 shortly after absorbing several similar but more regional societies including the African Association, the Raleigh Club and the Palestine Association. The RGS sponsored many of the most important and exciting voyages of exploration ever undertaken, including the exploration of Charles Darwin, David Livingstone, Robert Falcon Scott, Richard F. Burton, John Speke, George Hayward, H. M Stanley, Ernest Shackleton and Sir Edmond Hillary. Today, the RGS remains a leading global sponsor of geographical and scientific studies. The Society is based in Lowther Lodge, South Kensington, London.


Alexander Keith Johnston (December 28, 1804 - July 9, 1871) was a Scottish cartographer and map publisher active in the middle portion of the 19th century. Johnson was born at Kirkhill, near Edinburgh, Scotland. He studied at the University of Edinburgh where he apprenticed as an engraver. Around 1826, in partnership with his brother William, he founded a cartographic printing and engraving firm with the imprint "W. and A. K. Johnston." Johnston made a name for himself in educational geography, publishing numerous maps for use in schools. His brother, William Johnston, eventually left the firm to pursue a career in politics, eventually becoming the Lord Provost of Edinburgh. Alexander's son, who would bear the same name, became a geographer and explorer, suffering an untimely death on the Royal Geographical Society's 1879 expedition to Lake Nyasa.

Very good. Minor verso repair of a fold separation and minor closed margin tear professionally repaired on verso. Blank on verso.
Looking for a high-resolution scan of this?