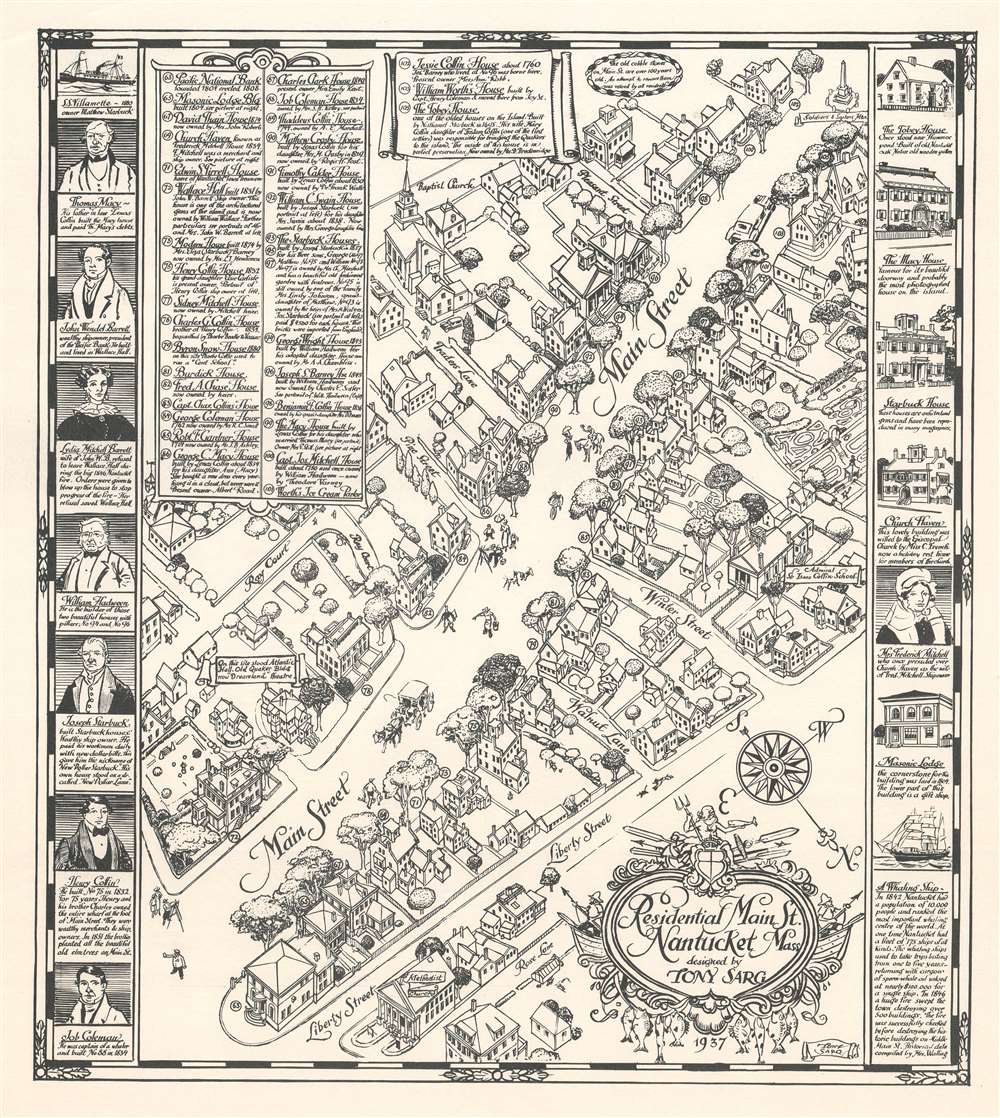 A beautiful 1937 Tony Sarg pictorial map of Main Street, Nantucket, Massachusetts. Presented as a partial bird's-eye view, the map looks southwest on the beautiful whaling town's Main Street from the four-way intersection of Main, Liberty, Orange, and Centre Streets. The map extends along Main Street as far as the Junction of. Main, Gardner, and Milk Street, where the Soldiers and Sailors Monument still stands. Important buildings are identified numerically and correspond to a table to the left, where 105 buildings are noted along with some of their history. Alon the left and right border historical figures and buildings are noted, among them important ships. A decorative allegorical cartouche references the Nantucket's whaling and nautical heritage.

This map was issued by Tony Sarg in 1937. We are aware of only one edition. The map is rare in collections and to the market.

Anthony Frederick Sarg (April 21, 1880 – February 17, 1942), known professionally as Tony Sarg, was a German American puppeteer and illustrator. Sarg was born in Cobán, Guatemala, to Francis Charles Sarg and his wife, Mary Elizabeth Parker. The elder Sarg was a consul representing Germany; Parker was English. The family returned to the German Empire in 1887. Sarg enrolled at a military academy at 14 and received a commission as lieutenant at 17. In 1905 Sarg resigned his commission and relocated to the United Kingdom, where he pursued a relationship with Bertha Eleanor McGowan, an American he met in Germany. They were married in her hometown of Cincinnati, Ohio, January 20, 1909, and returned to England where their daughter Mary was born two years later. In 1914, with the start of World War I, he sent Bertha and the children to Cincinnati, followed them soon after, and settled the family in New York City in 1915. He became a naturalized U.S. Citizen in 1920. Sarg's grandmother collected puppets and passed the passion on to Sarg, who began to work as a hobbyist puppeteer. He produced his first animated film, The First Cricus. Later he designed several enormous helium balloons in the form of animals for Macy's department store, giving rise to the tradition that is still favorite of children at the annual Macy's Thanksgiving Day Parade. He also worked on the puppets in Macy's famous Christmas window displays. The pinnacle of Sarg's career his presentation at the 1933 Chicago World's Fair, where his work reached a cumulative audience was 3 million. After this event his economic fortunes declines and he was forced into bankruptcy by 1939. In mid-February 1942, Sarg had surgery for a ruptured appendix, and died three weeks later of complications. He interred at Spring Grove Cemetery in Cincinnati, Ohio.