1796 Bowles Map of New England during the Revolutionary War 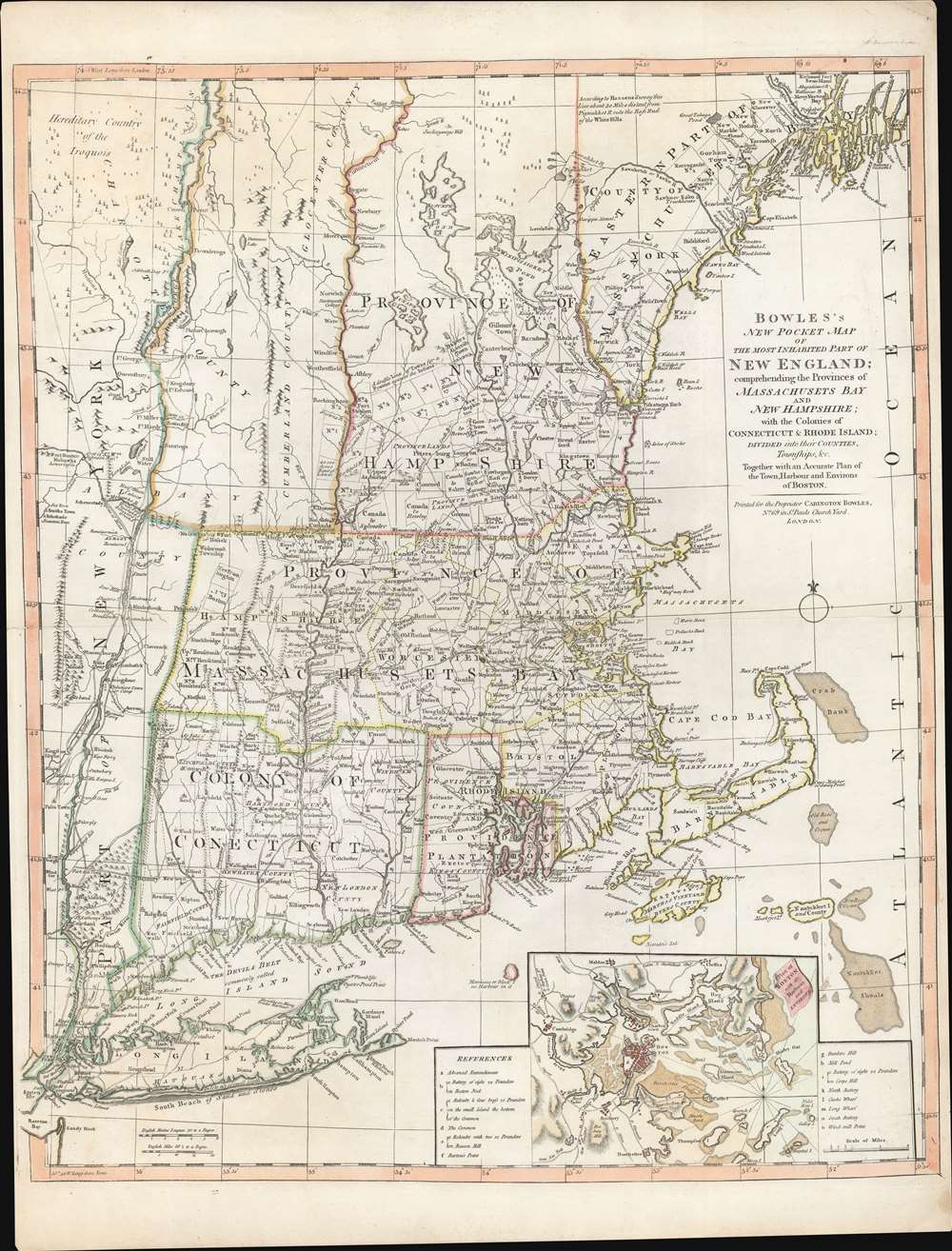 1796 Bowles Map of New England during the Revolutionary War

Bowles's New Pocket Map of the Most Inhabited Part of New England; comprehending the Provinces of Massachusets Bay and New Hampshire; with the Colonies of Connecticut and Rhode Island; Divided into their Counties, Townships, and c. Together with an Accurate Plan of The Town, Harbour and Environs of Boston.
1776 (undated)     25.5 x 20.5 in (64.77 x 52.07 cm)     1 : 800000

A rare separately published 1776 American Revolutionary War map of New England by Carington Bowles - here in the scarce 4th edition that immediately followed the action at Bunker Hill. It represents one of the best and most up-to-date Revolutionary Era maps of New England. This map was initially issued by Carington Bowles in 1765 as a reduced and updated improvement upon the 1755 John Green / Braddock Mead map. The map transitioned through six known states, the present example representing the fourth state, updated with relevant content at the beginning of the American Revolutionary War (1775 - 1783).

Centered on Massachusetts, this map covers the New England coastline from Long Island, New York, to Little Kennebec Bay, Maine, and from Cape Cod and Nantucket westward to just beyond the Hudson River. This edition contains a wealth of updates. Dartmouth College appears for the first time. There are also significant updates in and around both Lake George and Lake Champlain - soon to be a major theater of war. It also adds the large inset of Boston in the lower right - significant for its annotation of defenses (see below).

In New York, just north of Albany, there is a note identifying the Seat of Sir William Johnson. Johnson was an Anglo-Irish Baronet who moved to New York to manage an estate in Mohawk territories. Johnson mastered the Mohawk language as well as Iroquois customs and served as a liaison between the British Crown and the American Indian nations. He died shortly before the outbreak of the American Revolutionary War. Additional fortifications and settlements are noted all along the Hudson River.

The large and detailed plan of Boston in the lower right makes its first appearance in this edition of the map. While Boston was always an important trade center, the present map follows on the Battle of Bunker Hill and other Revolutionary War action that put it at the forefront of the conflict. Centered on Boston proper, the inset details from Malden to Dorchester and from Cambridge to Boston Bay. Roads, topography, important buildings, and military installations are noted and referenced via alphanumeric tables to either side of the inset.

First published in 1765, this map exists in six states, this being the fourth: While the map series is well represented institutionally, as the map is undated, it is difficult to identify states held due to insufficient catalog data. We see little evidence of this map on the market, with only a single example of the 4th edition, and four examples of earlier editions in auction records.