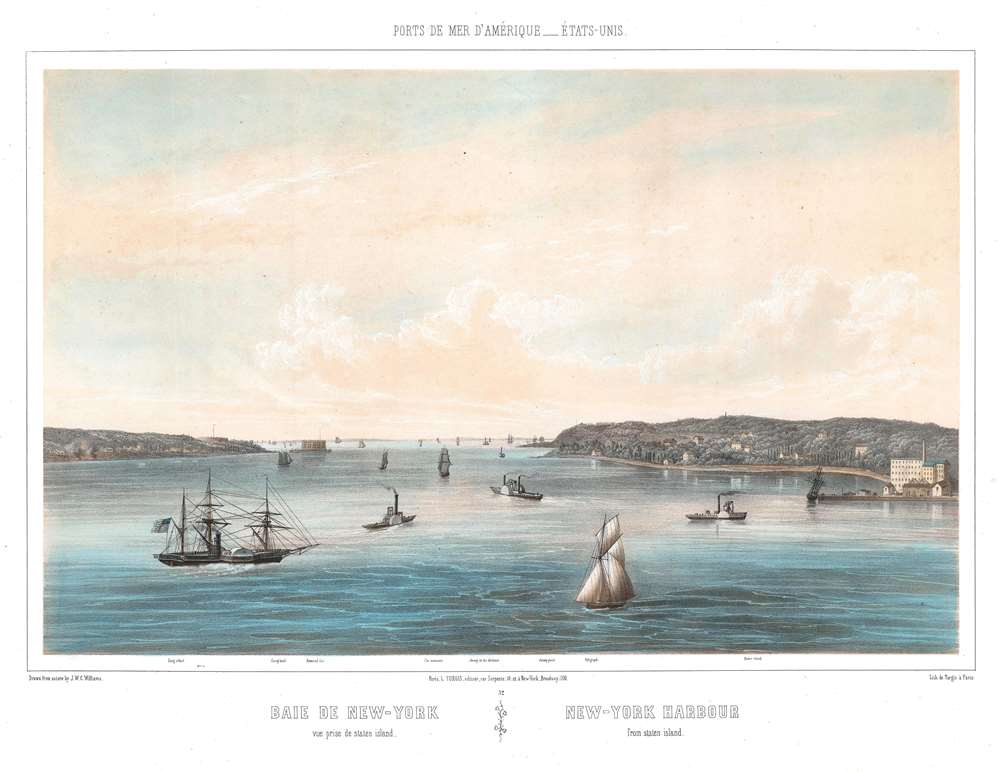 This is an 1856 J. W. C. Williams view of New York Harbor looking toward The Narrows and the future site of the Verrazzano-Narrows Bridge. Brooklyn is on the left (present day Bay Ridge and Fort Hamilton) and Staten Island on the right. Numerous steam and sailing ships traverse the harbor to and from The Narrows. Both Fort Hamilton and Fort Lafayette (labeled here as Diamond fort) appear on the Long Island side of The Narrows. Fort Diamond was begun during the War of 1812, finished in 1822, and renamed Fort Lafayette in 1823 after the Marquis de La Fayette. The fort became a prison for suspected Confederate sympathizers during the American Civil War and was demolished in 1960 to make room for the Verrazano-Narrows Bridge. Other labeled locations include Sandy Hook, Jersey Point, and 'Jersey in the distance'.

The vogue for bird's-eye city views lasted from about 1845 to 1920, during which period some 2,400 cities were thus portrayed, some multiple times. Although views were produced in many urban centers, the nexus of view production in the United States was Milwaukee, Wisconsin. The major American viewmakers were Stoner, Wellge, Bailey, Fowler, Hill, Ruger, Koch, Burleigh, Norris, and Morse, among others .

This view was drawn by J. W. C. Williams and published by Louis Turgis in New York City and Paris in 1856. We note a single cataloged example which is part of the collection at the Metropolitan Museum of Art in New York City. We are aware of two other examples in private hands.

J. W. C. Williams (fl. c. 1850 - 1862) was an American landscape artist active in New York the mid-19th century. He produced several watercolor views of New York Harbor, some of which were subsequently published in Paris by Louis Turgis. We have been unable to identify William's first name or other biographical details. However, a collection of work related to Williams is on record at the Frick Art Reverence Library (80193172 / 100 Williams) that may offer insight into this talented but little-known painter. Learn More...


Louis Auguste Turgis (May 2, 1818 - March 31, 1894) was a French printmaker and seller. Born in Gouville-sur-Mer, Turgis took over the family printselling business after his elder brother Élimir Auguste Turgis (November 20, 1838 - October 7, 1856) died. Before Louis took over the business, his mother and elder brother had successfully expanded outside Paris to Toulouse, several cities in Spain, and, in 1854, New York City. Under Louis's guidance, the business continued to grow. They maintained their offices in New York and Paris and by 1893 their catalog's introduction was published in French, English, Spanish, and Italian. In 1891, Turgis was joined by his sons and the firm was renamed L. Turgis et fils. Learn More...

Metropolitan Museum of Art Accession Number 54.90.1446.
Looking for a high-resolution scan of this?