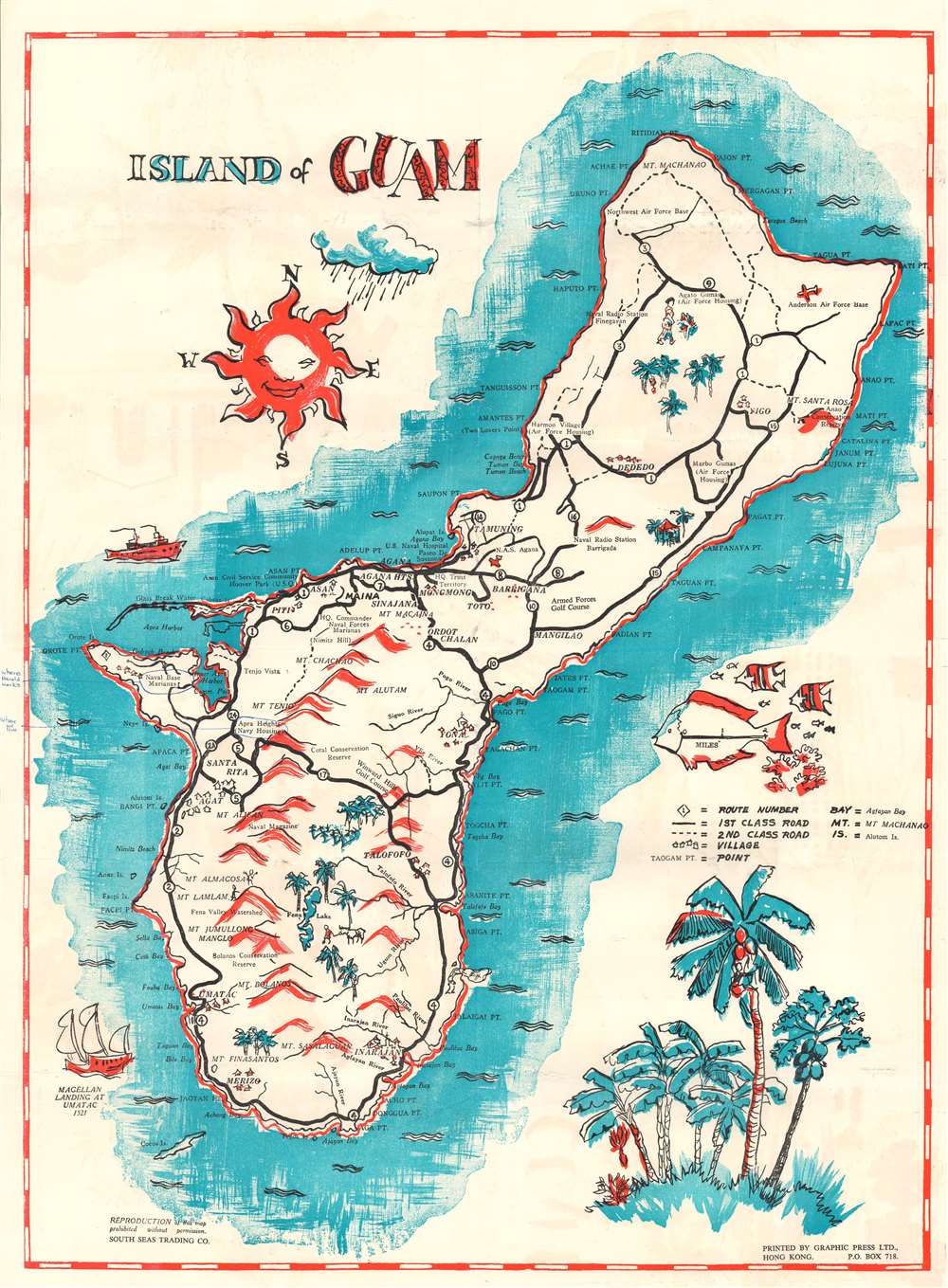 This is a c. 1955 South Seas Trading Company pictorial map of Guam. Depicting the entire island, a brilliant blue sea surrounds Guam. Red mountains hint at the island's topography and blue palm trees refer to its tropical climate. Guam, a U.S. territory in Micronesia in the western Pacific, is a major strategic asset for the U.S. military. The island hosts U.S. Navy and U.S. Air Force Bases. These bases are prominently labeled, including Naval Air Station Agana, the U.S. Naval Hospital, Naval Base Marianas, Headquarters Commander Naval Forces Marianas, Anderson Air Force Base, and Northwest Air Force Base. Towns around the island are identified, along with golf courses, conservation reserves, individual mountain peaks, rivers, and other sites.

Wonderful brightly colored illustrations adorn the map's verso and highlight important sites and aspects of Guam's culture. The South Seas Building, home of the South Seast Trading Company, occupies the center of the sheet and is described as 'a shopper's paradise' and 'a gift shop specializing in exotic merchandise'. There are short descriptions of Agana, Guam's capital, and the island's physical characteristics. Perhaps the most intriguing part of this piece is that it was meant to be folded up and sent via the post, as is evidenced by the 'To' and 'From' fields on the verso. The present example was used for just that purpose. It is postmarked July 15, 1960, and was to Maine.

This map was sent by Jane Kapuaola Thombs (c. 1925 - October 20, 2010), wife of Harold Babcock Thombs (January 7, 1918 - March 14, 1993). Harold Thombs worked as a supervisor at the Structural Shop at the Pearl Harbor Naval Yard in Honolulu and was also superintendent of the Structural and Services group at the Naval Ship Repair Facility in Guam. On the present map, which Jane sent to Harold's parents, Eva and Harry Thombs, Jane circled and labeled 'where Harold works' (Naval Base Marianas) and 'where we live' (Apra Heights Navy Housing). Harold and Jane were married for forty-five years and they had two sons.

This map was created and published by the South Seas Trading Company c. 1955. It is uncatalogued in OCLC and we are aware of only one other example in private hands.

The South Seas Trading Company (1950 - c. 1976) was founded in 1950 by Victor A. Olsen (June 7, 1897 - December 23, 1985) in East Agana on the island of Guam. Olsen was born in Ogden, Utah, to Norwegian immigrants. One of seven children, Olsen grew up on a farm and helped his family work the farm. At some point, he left farm work behind and went to work in a canning factory that packaged farm products for market. He began as an odd-job helper, then he became a food taster in the factory's laboratory. He then moved on to accept a job driving a truck from the fields to the factory and eventually became the warehouse foreman. He also worked as an engineer at a sugar beet processing plant and operated an auto storage warehouse and repair shop. Olsen came to the Pacific after answering a help wanted ad about a position at the Army's Hickam Air Base in Hawaii during World War II. After some time working in Hawaii, Olsen developed a desire to see the rest of the Pacific and took a job as a trade specialist for the government. This job took him to the Caroline and Marshall Islands, where he created native rehabilitation programs. Apparently this job took him to most of the inhabited islands in the Pacific. In 1947, Olsen settled on Truk, an atoll in Micronesia, and opened the first South Seas Trading Company with a native partner. This company collapsed and he moved back to the United States where he ran a motel one hundred miles outside San Francisco. He moved to Guam in 1950 and opened a new branch pf the South Seas Trading Company that became very successful. Over the course of the company's existence, Olsen expanded from running the business out of one room into occupying two small buildings. The business provided everything from furniture to cold weather clothing. Olsen was also and avid photographer and many of his photographs adorned the front of picture postcards sold around Guam in the 1950s through the 1970s. Typhoon Karen destroyed the business and Olsen's home in 1962, but he rebuilt. He also published a ninety-two page booklet about the storm and its destruction illustrated with photos he took in the days immediately following the storm. It is unclear what happened to the South Seas Trading Company. The last reference we were able to find to the business was an announcement in a Guam newspaper from 1976 alerting the island's residents to a break-in at the store and the fact that several turntables and amplifiers were stolen. Olsen was married to his wife Gwen, with whom he had two daughters and a son, all of which moved to the U.S. and married. Olsen died on December 23, 1985 in San Diego, California. Learn More...

Very good. Exhibits some wear along original fold lines. A few manuscript notations in pen. Text and illustrations printed on verso.
Looking for a high-resolution scan of this?