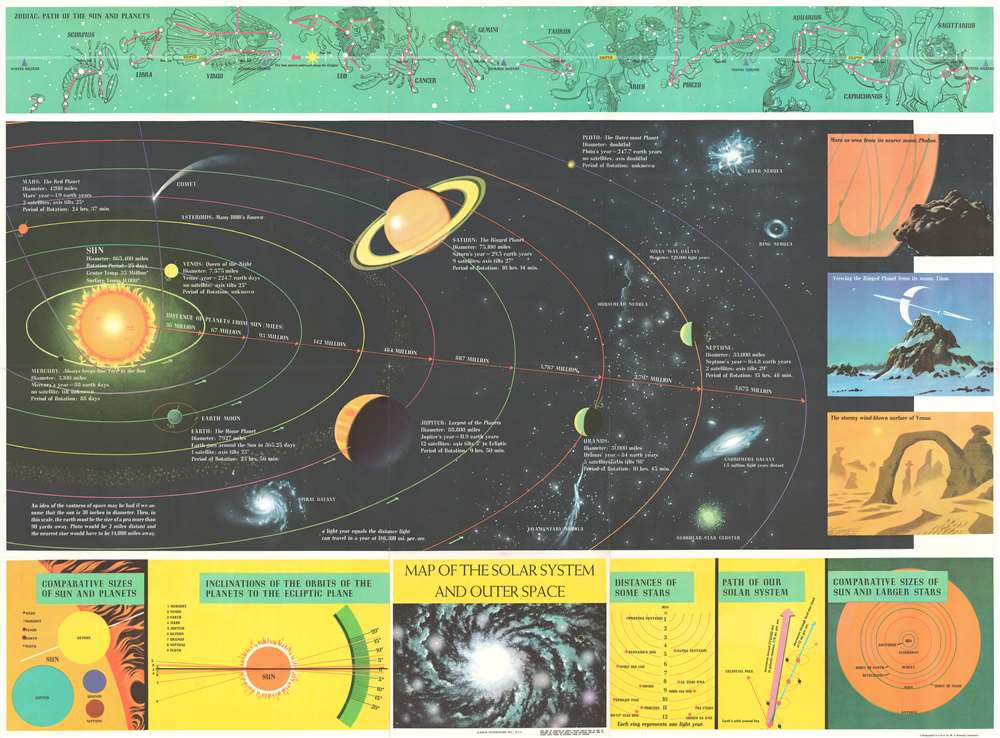 A map of our solar system including charts comparing the sizes of the planets and distances to the nearest stars.
$250.00

This is a 1960 Book Enterprises, Inc. map of our solar system. The central map depicts our solar system from the Sun (although Mars is to the left of the Sun) to Pluto (obviously prior to Pluto's demotion to dwarf planet). Planetary orbits for all nine planets in our solar system are illustrated in different colors to allow for easy differentiation. Each orbit's distance from the Sun is given, as are several statistics about each planet, including its name, diameter, length of year relative to one Earth year, number of satellites, and period of rotation. Several statistics are listed simply as unknown, including the diameter of Pluto. Illustrations of the Andromeda galaxy, the Ring Nebula, the Crab Nebula, and the Horsehead Nebula are also included. Artistic renderings of views around the solar system are situated along the right border, presenting a view of Mars from Phobos, its moon; a view of Saturn from one of its moons, Titan; and a view of the wind-blown surface of Venus. Artistic drawings of the constellations of the zodiac are situated along the top. Each sign is identified, and the Ecliptic path is illustrated in the center, with the solstices, equinoxes, and the first of each month marked off.

A collection of charts present along the bottom border provides a small insight into the vastness of outer space. Proceeding from left to right, the first chart illustrates the relative size of the nine planets in the solar system and the Sun, with only a fraction of the Sun's total area illustrated, making it obvious just how much larger the Sun is than the planets. The second chart presents the inclinations of the orbits of the planets around the Sun. The following illustration locates, relatively speaking, our solar system inside the Milky Way Galaxy, highlighting the fact that it is located 30,000 light years away from the galaxy's center. The two smaller charts next to the Milky Way Galaxy illustration show relative distance to the closest stars (with the distances measured in light years) and the path of the solar system through the galaxy. The final illustration compares the sizes of stars, making it abundantly clear that, even though the Sun dwarfs the nine planets orbiting around it, it is dwarfed by many other stars in the solar system.

This map was created by Book Enterprises, Inc. and published in 1960. The OCLC records examples of this map as being part of eleven institutional collections, including those at the University of Chicago, the University of Illinois at Urbana Champaign, Florida State University, the Colorado School of Mines, and the University of Arizona. It is scarce on the private market.