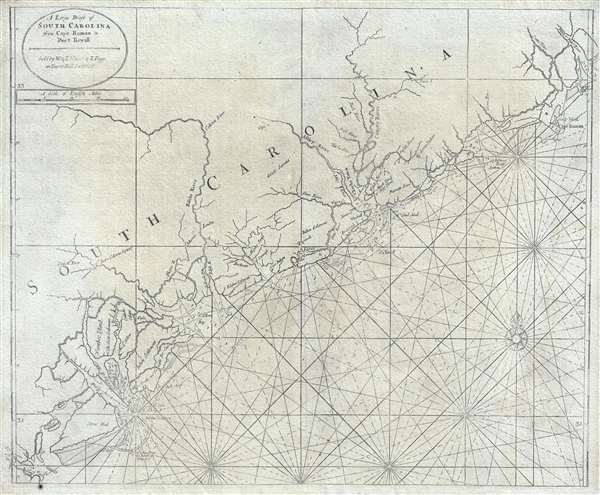 English pilot chart of South Carolina drawn at the end of the French and Indian War.
$5,500.00

An extremely rare and important 1763 Mount and Page nautical chart or maritime map of the coast of South Carolina issued at the end of the French and Indian War (1754 - 1763). Centered on Charleston (Charles Town), the map covers from the Santee River and Cape Romain (Cape Roman) to Hilton Head and Port Royal. The cartographer notes various Indian and European Settlements, including the Scotts Settlements, Sr. Peter Colleons Signory, the Edestow Setlements (Edisto Settlements), the site of a Sewee Indian village, and more. There are soundings along much of the coastline, but particularly concentrated around Charleston and Port Royal.

This chart was first drawn by John Thornton and issued in the 1706 edition of the English Pilot, the Fourth Book. Thornton derived the basic cartography from the 1685 manuscript map of Maurice Mathews (1694), leader of the notorious Barbadian planter gang, the 'Goose Creek Men.' The present example is the third state, issued by Mount and Page is 1863 or 1864.

This map exists in three known states, all of which are identical with the exception of the imprint:Today all states of this early South Carolina chart are extremely scarce and rarely appear on the market.