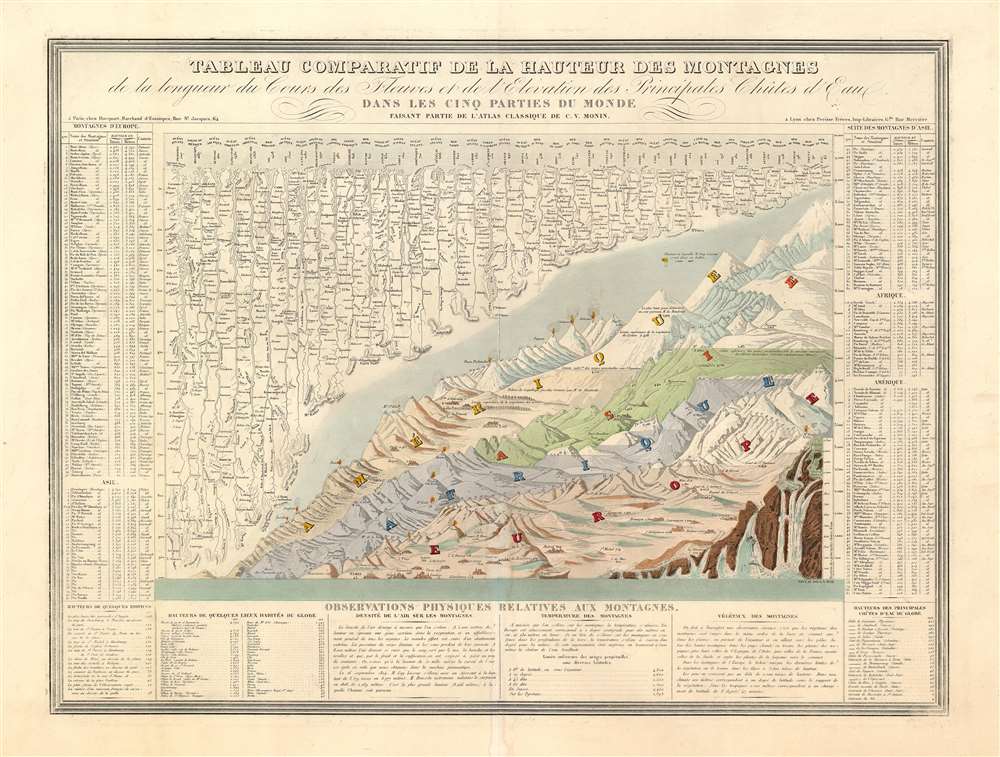 This is Charles V. Monin's 1838 comparative mountains and rivers chart. This extraordinary chart is considered the highest expression of the mountains and rivers convention as developed in the 19th century. It is a vast, detailed, comprehensive, and beautifully rendered tableau. Although roughly based upon Bulla's 1826 Tableau Comparatif, Monin added numerous topographical and geological notations, updated the older chart with regard to new information, redrew the waterfalls section, and incorporated textual data to either side of the chart proper. Even the ballooning feat of Gay-Lussac who attained an altitude of 7000 meters in 1808 is noted.

The comparative mountains section, occupying the lower right half of this chart, details the principle mountains of the world. The elevations of a number of important cities including Paris, Rome, London, Geneva, Mexico, Bogota, and Quito, among others, is noted. The Himalayan peak Dhaulagiri is identified as the world's greatest mountain. A waterfall chart occupies the extreme bottom right with the Pyrenean waterfall of Gavarnie identified as the world's highest.

The upper left portion of this chart is dominated by the world's greatest rivers. Monin attempts not only to express the lengths of the various rivers, but also details regarding their course and sources. All along each river important lakes, cities, directions, and distance measurements are noted. Here the Amazon is identified as the world's greatest river at 1507 km, followed by the Mississippi at 1687 km. The Nile comes up a sad fifth at just 1458 km even though its full length had yet to be explored.

It was published by Charles V. Monin for publication in his 1839 Atlas Classique De La Geographie Ancienne. This is a rare opportunity to own one of the finest comparative mountains and rivers charts to appear in the 19th century. Only three separate examples are cited at the OCLC.

Charles V. Monin (1830 - 1880) was a French map publisher working the early to mid 19th century. A progressive printer, Monin was one of the first cartographic printers in Europe to take advantage of the newly discovered lithographic engraving process. His workshops in Paris and Caen, France, produced three important atlases as well as numerous independent issue maps. Monin was a member of La Sociéte de Géographie in Paris. He is known to have worked with other French map publishers including Vuillemin and Fremin. Learn More...