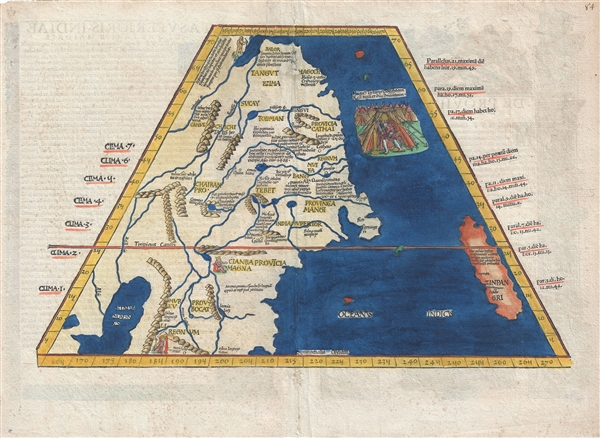 A seminal work, this 1522 first edition map of Lorenz Fries is the first European map to focus exclusively on East Asia, particularly on China and Japan, and the first specific map to utilize Marco Polo's geography in East Asia. Although, like most Ptolemaic maps, the geography can be a little hard to decipher by modern standards, with only a little scholarship the map unfolds. The map covers from the Arctic to the Equator (although Fries has placed the equator too far north) and from the Gulf of Thailand (Sinus Magnus) to Japan or Zipangri. It is presented on the trapezoidal projection. Latin on the verso features the map's description as well ad a description of the regions depicted.

Fries based this map on Martin Waldseemüllers's wildly important world map of 1507, which he had copied and issued a reduction of in 1520. Waldsemuller's world map was important for many reasons, one of which was that it extended the traditional Ptolemaic world beyond the textual content of the Geographia by including not only the New World, but also new cartographic information about East Asia. When Fries sat down to prepare a new edition of Waldseemüller's 1513 Geographie Opus Novissima, he introduced two additional unique maps, expanding on the traditional Ptolemaic corpus: a map of Southeast Asia, and the presently offered map of China and Japan.

Of the Latin place names presented, Provincia Cathai, an archaic term for northern China, is perhaps the most obvious. To the right there is an impressive illustration of the Great Kahn or King of the Tartars sitting in a tent surrounded by his army. Further south, Provincia Mangi is Polo's term for southern China. The Champa civilization, which once prospered in modern day Vietnam, is here identified as Cianba Provincia Magna (Great Champa Province). The king of Champa is illustrated on his throne. Further south Bocat represents Cambodia (Cambocati). Further south still another king appears enthroned who may be the King of Siam or Malay. Tibet, here spelled 'Tebet' is very prominant. Far to the north, the 'Balor' are identified with an accompanying photograph of a bearded hunter – these were nomadic people who according to Polo ate 'only deer.'

In the Pacific to the east of China, Zinpangri is identified as a large island. This is an early term for Japan despite roughly occupying a location more precisely associated with the Philippines. Two place names are identified, Sinpaugen an Cobebe. The source for these cities are unclear and does not seem to be drawn to Polo although Sinpaugen may simply be a version of Zimpangri.

This map was issued in the 1522 Lorenz Fries Strasburg edition of Ptolemy's Geographia. This edition is exceptionally rare and so may not have been a commercial success. Nonetheless subsequent editions with identical maps but revised text edited by Wilibald Pirkheimer appeared in 1525, 1535, and 1541.

Lorenz Fries (c. 1490 – 1531) was a German cartographer, cosmographer, astrologer and physician based in Strasbourg. Little is known of Fries' early life. He may have studied in Padua, Piacenza, Montpellier and Vienna, but strong evidence of this is unfortunately lacking. The first recorded mention of Fries on a 1513 Nuremberg broadside. Fries settled in Strasbourg in March of 1519, where he developed a relationship with the St. Die scholars, including, among others, Walter Lud, Martin Ringmann and Martin Waldseemüller. There he also befriended the printer and publisher Johann Grüninger. Although his primary profession was as a doctor, from roughly 1520 to 1525 he worked closely with Grüninger as the geographic editor of various maps and atlases based upon the work of Martin Waldseemüller. Although his role is unclear, his first map seems to have been a 1520 reissue of Waldseemüller's world map of 1507. Around this time he also began working on Grüninger's reissue of Waldseemüller's 1513 edition of Ptolemy, Geographie Opus Novissima. That edition included three new maps by Fries based upon the Waldseemüller world map of 1507 – two of these, his maps of East Asia and Southeast Asia, are quite significant as the first specific maps of these regions issued by a European publisher. In 1525 Fries decided to leave Strasbourg and surrendered his citizenship, relocating to Trier. In 1528 he moved to Basel. Afterwards he relocated to Metz where he most likely died. In addition to his cartographic work, Fries published tracts on medicine, religion, and astrology.

Ptolemy, C., Geographicae Enarrationis... (Grüninger: Strasbourg) 1522.     The Geographie of Lorenz Fries, Johann Grüninger, and Johann Koberger is one of the most important editions of Claudius Ptolemy's Geographia. First published in 1522, the Fries Geographie is essentially a reduction of Waldseemüller's 1513 Geographie Opus Novissima, but with an important change, the incorporation of three new maps maps, one of the world on the Ptolemaic model, and two completely new maps focusing on East Asia and Southeast Asia. The first edition, 1522, appears to have been a commercial failure, possibly because of numerous textual errors, as is evidenced by its remarkable rarity today. Nonetheless, a subsequent edition appeared in 1825 with a text overhaul by Wilibald Pirkheimer based upon the comments of Johannes Regiomontanus. Grüninger died in 1531, but his son Christoph sold the map plates to Melchior and Gaspar Trechsel of Lyons who issued editions in 1535 and 1541.