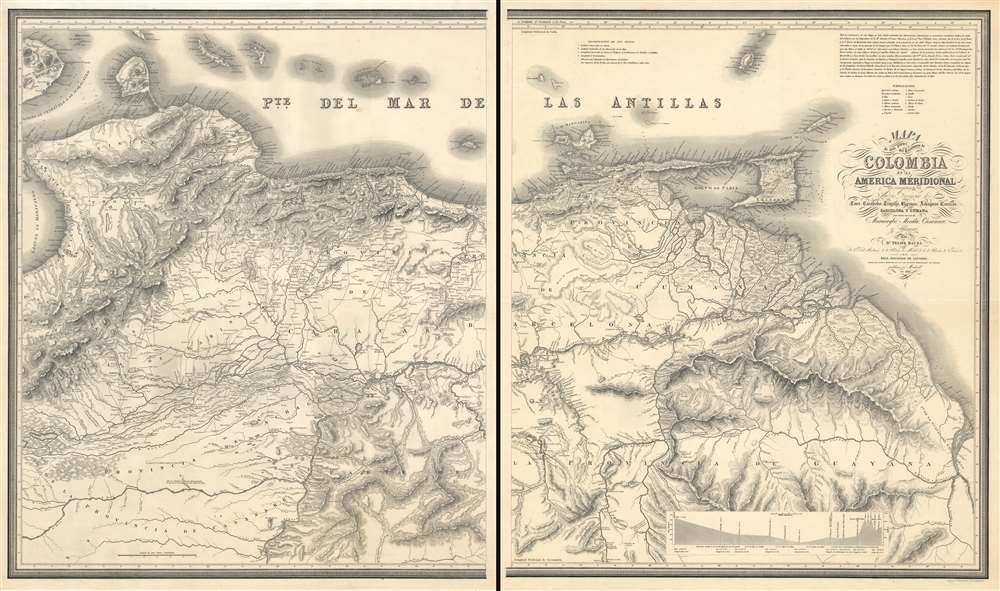 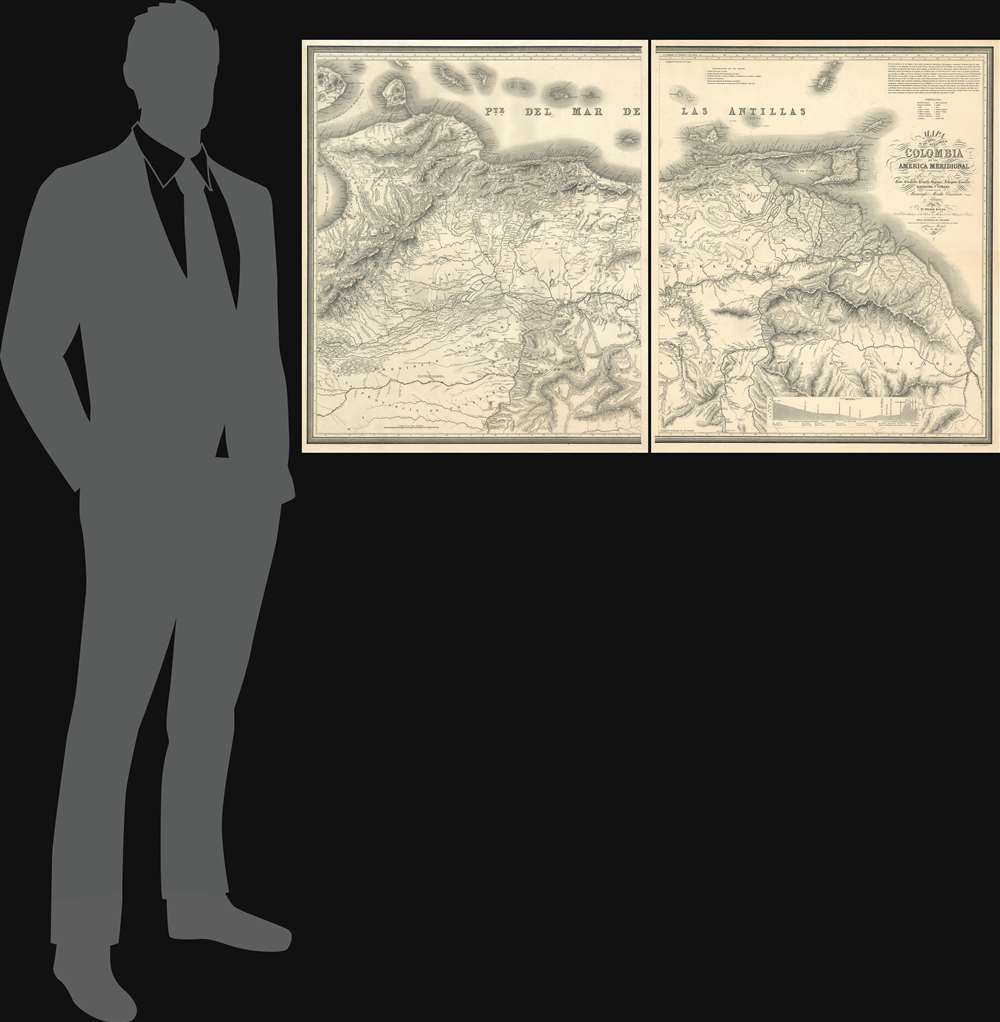 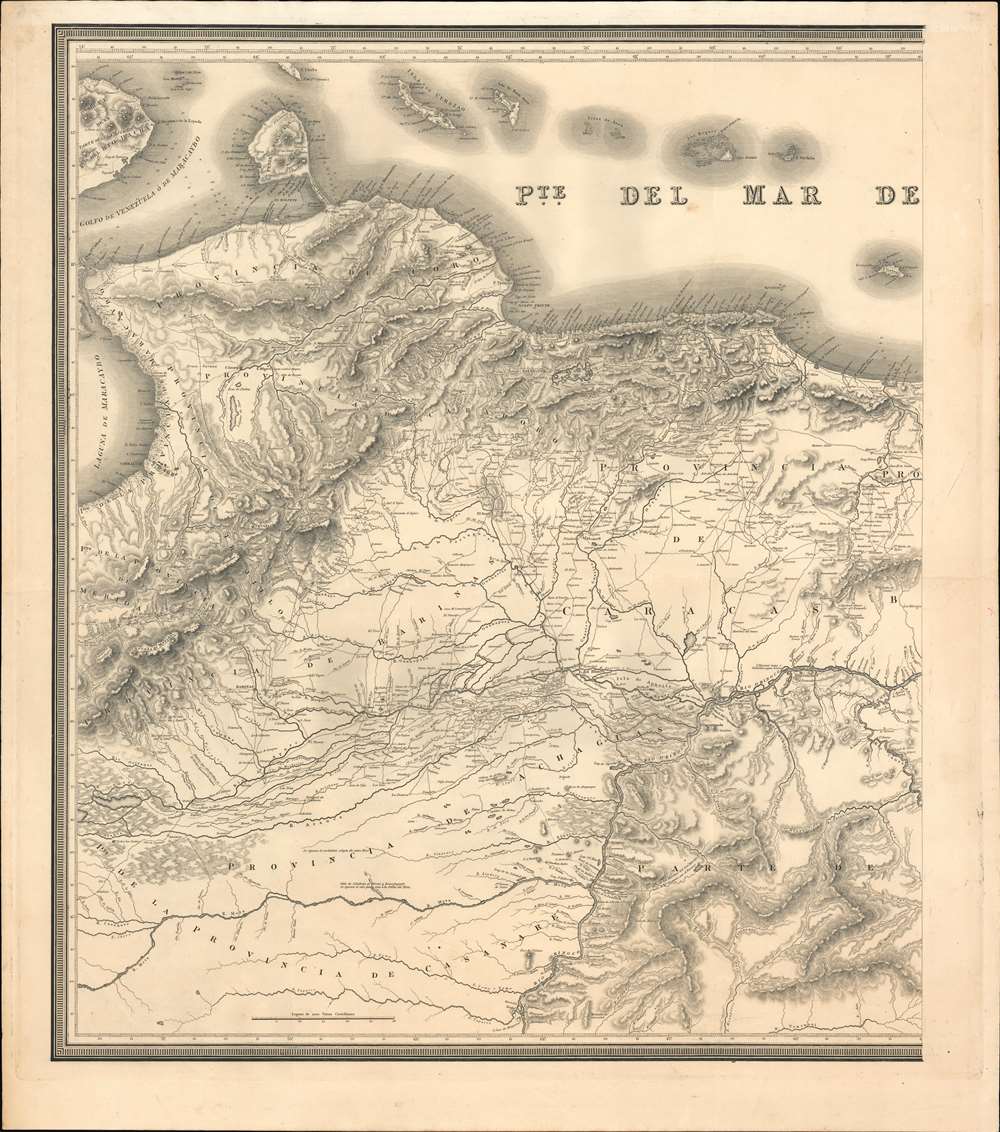 An Extraordinary And Enigmatic 1841 Map Of Venezuela By Felipe Bauzá And José María Cardano. Although Perhaps The Finest Geographical Map Of Venezuela To Appear In The 19Th Century, It Was Likely Never Formally Published Or Distributed, With The Present Map Being An Unpublished Proof. Coverage Extends From Lake Maracaibo To The Essequibo River Delta, Covering Most Of What Is Today Venezuela. It Is Meticulously And Richly Detailed By Bauzá, And Masterful Engraved By Cardano, His Nephew.

Bauzá And This Map

The Map Is The Product Of Felipe Bauzá's Passion To Redefine The Cartography Of Latin America And At The Same Time Support His Family - Which From 1823, Was In Exile In London And Under Extremely Pecuniary Pressure. From The 18Th Century, Bauzá Was A Prominent Figure With The Direccion Hidrográfico, The Spanish Equivalent Of The British Admiralty. Around 1900, He Conceived An Ambitious Project - To Completely Redefine The Map Of Latin America. To This End, He Began Collecting Cartographic Materials With His Own Funds. In 1823, The Reinstatement Of Monarchial Power In Spain Put Bauzá At Odds With The Authorities - Who Ordered A Death Sentence On Him. Like Many Liberals Of His Generation, Including Francisco Goya And Cardano, He Fled To England, Taking With Him His Vast Personal Archive Of Cartographic Materials.Facing Extreme Pecuniary Pressure As A Refugee In London, Bauzá Determined To Earn A Living Publishing Maps. Quoting From Peter Barber ('Riches For The Geography Of America And Spain': Felipe Bauzá And His Topographical Collections, 1789-1848') 'Bauzá's Described His Ambition In Writing To Lord Holland In June Of 1823, When Writing To Lord Holland In June 1823 He Had, Nevertheless, Described His'

[Riches For The Geography As Much Of America As Of Spain, Being The Only Means That Henceforth Can Provide For The Subsistence Of My Family In A Country Such As This (I.E. England) In Which The Arts And Sciences Are Equally Appreciated].

He Was Not Being Insincere Or Unduly Mercenary. For It Seems Almost Certain That He Intended To Continue Using His Collections As Research Material For His Atlases Of Spain And South America And As A Source From Which, If Necessary, Commercial Maps And Charts, Engraved By His Nephew José Cardano, Who Was Already In England, Could Be Prepared For Sale. As Such The Collections Would, Indeed, Have Formed The Basis Of His Subsistence. As He Stated To The British Authorities In December 1823, He Had Brought It To England

[With The Object Of Publishing It In London As The Only Means Of Being Able To Provide For Himself And His Son And Attending To The Needs Of His Wife And Two Daughters Whom He Has Left In Spain].

Like Many Of The Best Cartographers, Bauzá Takes Pains To Identify His Sources In Large Text Block In The Upper Right. Much Of The Cartography Is Attributed To Alexander Von Humboldt, Who Visited Venezuela In The Early 19Th Century. He Also References Churuca, Fidalgo, José Joaquín Ferrer.

That This Map Is Attributed To Bauzá Suggests That It Must Have Been Drawn Before His Death In 1834. The Political Composition, Including The Arrangement Of The Provinces, Suggests A Date Of About 1830, Or Slightly Earlier. Note The Map's Is Named 'Colombia', But The Title Suggests This Map Represents The 'Nuevas Provincias', Possibly Referencing The 1830 Separation Of Venezuela. The Date Of 1841 Is Therefore Confusing. It May Be That The Plates For This Map Were Initially Engraved In In 1830, But Were Updated, By Cardano Or Someone Else To 1841. The Fact The Map Was Politically Outdated At The Time Of Its Printing May Be The Reason That, Despite Its Impressive Geographical Detail, It Was Never, As Far As Well Can Tell, Issued In Quantity. Rare. Examples Are Known At The Library Of Congress And At The William Clements Library At The University Of Michigan.

Felipe Bauzá y Cañas (February 17, 1764 - March 3, 1834) was a Spanish cartographer, navigator, and naval officer active in the late 18th and early 19th centuries. Bauzá was born on the Balearic Islands in the Mallorcan city of Palma. He attended the Spanish maritime college in Cartagena, Spain. He saw action during the Siege of Gibraltar (1779 - 1782), the capture of Port Mahón, and a campaign against the Moors (1783 - 1784). Exhibiting a proficiency in mathematics and draftsmanship, he subsequently trained as a hydrographer and cartographer under Vicente Tofiño (1732 – 1795), the premier Spanish nautical chartmaker of the day. Bauzá was the head cartographer on the Malaspina Expedition (1789 - 1794) to the Americas, Oceania, and Australasia. From 1797, he worked with the Depósito Hidrográfico / Dirección Hidrografica in Madrid, becoming head of said organization in 1815. Renowned as a cartographer, he was honored with the Russian Cross of St. Vladimir in 1816 and was elected a Foreign Member of the Royal Society of London in 1819. From about 1800, he began assembling a personal collection of maps and charts intended to form the backdrop of a series of definitive maps of Latin America. Political fate intervened with his plan. Bauzá was a supporter and leader of the of Rafael de Riego Revolution in 1920, and served the Cortes Generales during the Trienio Liberal ('Three Liberal Years', 1820 - 1823), as the deputy for Mallorca. After the fall of that regime, in 1823, he was sentenced to death by King Ferdinand VII. Bauzá fled to England in that year, taking with him his nautical charts and other geographical source materials. Bauzá and his family struggled in London, attempting to support themselves by publishing his cartography and selling parts of his collection to the British Admiralty's Hydrographic Office. His death sentence was finally commuted in 1833, but before he could return to Spain, he died of a brain hemorrhage. He family was left in destitution and his widow Teresa Rivera y Bauzá, made ends meet by selling his map collections. Some went to foreign governments (Venezuela) but most are not part of the Bauzá collection in the British Library. Learn More...


José María Cardano y Bauzá (1781 - 18??) was a Spanish draughtsman, cartographer, engraver and naval officer active in Madrid with the Spanish Dirección Hidrográfico / Depósito Hidrográfico. Cardano was the nephew of the important cartographer and head of the Direccion Hidrográfico, Felipe Bauzá y Cañas (1764 - 1834). He was bornin Cartagena and studied at the Cartagena School form 1796 - 1798. In 1799 he embarked as a cabin Boy on the Soledad, a Spanish frigate. He was promoted through the ranks until 1802, when he was assigned to the Dirección Hidrográfico, where he uncle Felipe Bauzá y Cañas, was increasingly influential. Under Bauzá's patronage, Cardano moved to Paris where he mastered engraving, returning to Spain 1806 as a salaried Direccion Hidrográfico engraver. From 1809, he was a professor of draughtsmanship at the military academy in Cádiz. Cardano briefly returned to sea from 1813 to 1817, when he received a scholarship, again under Bauzá's, to study lithography - at the time a new economical and innovative printing technique that the Direccion Hidrográfico was keen to adopt. He was sent to Berlin, to study lithograph under its inventor Alois Senefelder (1771 - 1834). He assisted in the establishment of one of Spain's first lithographic presses, Establecimiento Litográfico de Madrid, in 1818, but efforts to use the new system were foiled by low quality paper. Cardano was thus sent to Amsterdam and Paris, this time to study the art of paper making. He was likely fortunate to be out of the country, as the Spanish government fell into disarray. When King Ferdinand VII reasserted monarchal authority following the Trienio Liberal ('Three Liberal Years', 1820 - 1823), he and Bauzá both fled to London to avoid potential death sentences. In London he established a lithographic press at 2 Leigh Street, Burton Crescent, London. There he tutored the great Spanish artist and fellow exile Francisco Goya in lithography. The date of his death us unknown. Despite some scholarship suggesting he died in 1834, we known he was active in London until at least 1835, the date of his last known correspondence. There is a trade card for his business definitively postdating 1835 in the collections of the Metropolitan Museum of Art, suggesting he was active much later. At least one rare map, a lithograph map of Colombia, was issued in 1841, possibly posthumously. Likely he was alive and publishing well into the 1840s. His older brother Felipe Cardano y Bauzá (1778 - 1824) was also a copper engraver and lithographer. Learn More...