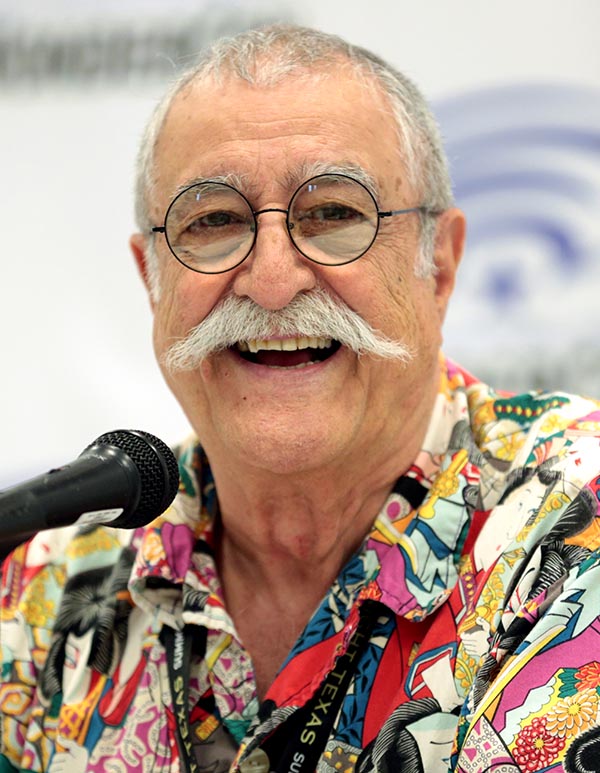 Sergio Aragonés Domenech (b. September 6, 1937), a Spanish/Mexican cartoonist and writer, is known by his fans and peers as 'the world's fastest cartoonist'. Most well-known for his contributions to Mad Magazine and for creating the comic book Groo the Wanderer, Aragonés was born in Sant Mateu, Castellón, Spain. He and his family fled Spain for France because of the Spanish Civil War and settled in Mexico when Aragonés was six years old. He discovered his passion for drawing and cartoons at a young age. Apparently, as a child, his parents left him by himself in a room with a box of crayons and while they were gone, he covered the wall in hundreds and hundreds of drawings. He moved to New York in 1962 with, according to Aragonés, nothing but twenty dollars and a portfolio of drawings. He scraped by in New York trying to sell his drawings by working odd jobs around the city until he decided to try to tell some cartoons to Mad. There he met Cuban-born artist Antonio Prohías, who 'adopted' him as his 'brother from Mexico'. The Mad editors liked his work and hired him. His work first appeared in a 1963 issue of Mad, and appeared continually until 2020, a total of 491 issues, second only to Al Jaffee's 509 issues. Aragonés became famous for drawing Mad's celebrated Marginals, small cartoons inserted in the margins or between panels throughout the magazine. It has been estimated the Aragonés drew and wrote over 12,000 gag cartoons for Mad as of 2002. Aragonés also illustrated comic books, with his most famous being Groo the Warrior, which debuted in 1982. Aragonés has won numerous awards, including the Eisner Award.