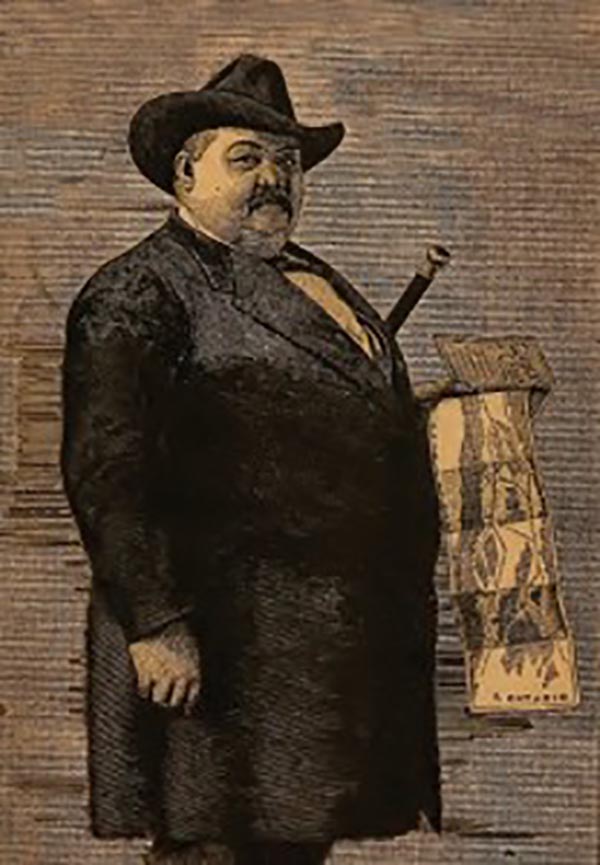 Edward Frederick Babbage (March 20, 1840 - June 23, 1891), better known as 'Phat Boy' Babbage, was an American travel guide and former show business advance agent. Born in Oak Orchard Creek, New York, Babbage moved to Rochester, New York, with his family during his childhood. Babbage would maintain a residence in Rochester for the rest of his life and become a fixture in the community, though his professional life would cause him to spend very little time there. Babbage had a twin brother, and the two bore an uncanny resemblance to each other, so much so that even close family friends could not tell them apart as boys. As young men, the brothers even dressed alike, so as to 'sustain the delusion'. Babbage attended Eastman's Business College in Rochester, and after finishing school worked with his father in the fruit commission business, a job for which he traveled extensively in Canada. After the Civil War, the Fiftieth Engineer Corps returned to Rochester and, as they had entertained their comrades-in-arms during down times with 'joke and song', the men decided to organize the 'Pontoon Minstrels', a group in the genre of white men that performed in black face in the popular genre of black minstrels that was sweeping the across the country. Babbage was engaged as their advance agent, and the group proved so popular that they traveled for years coast to coast, with Babbage leading the way. Babbage soon gained a reputation as a raconteur around Rochester, regaling all who would listen with tales from the road. After the 'Pontoon Minstrels' disbanded, Babbage was the most sought-after advance man in the country, and was eventually employed by 'Happy Cal' Wagner, who, unknowingly, bestowed Babbage with the 'Phat Boy Babbage' nickname that he would use for the rest of his life. Babbage worked for Wagner for several years, and then worked with a succession of other minstrel acts. Babbage is said to have boasted that 'there was not a town of 5,000 inhabitants in the United States which he had not visited'. After retiring from show business, Babbage worked for the St. Lawrence Hotel in Montreal for a while before taking a position with the Grand Trunk railway and the Richelieu and Ontario Navigation Company. By 1872, Babbage had been transferred by these companies to the excursion business along the St. Lawrence River and worked in this position until his death. He would lead tours up and down the river all summer, before heading to the South for the winter to promote his tours and sell tickets. A very well-known and popular man, Babbage was known for his genial nature that 'won him friends wherever he went', and, of course, his 'ponderous size', tipping the scales at 333 pounds.