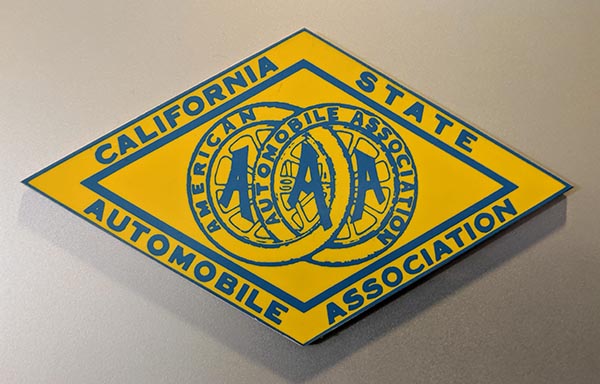 The California State Automobile Association (CSAA) (1907 - Present) is an American motor club and one of the largest clubs in the American Automobile Association (AAA) National Federation. Although officially incorporated in 1907, the CSAA began in 1900 with a meeting of car enthusiasts at San Francisco's Cliff House. This meeting of like-minded people recognized the need for better roads, signage, and more friendly laws, and led to the formation of the Automobile Club of California. The California state legislature passes a set of road regulations in 1905, creating uniformity across the state instead of a jumble of local laws and regulations. The CSAA produced its first road map of California in 1909 and posted thousands of road signs throughout the state until the state government took over the task in the early 1950s. The CSAA became an official AAA affiliate in 1910 after AAA incorporated in Connecticut. The CSAA opened its first office in Nevada in 1933, becoming the official AAA affiliate in Nevada. It acquired the Automobile Club of Utah in 1994. The CSAA changed its name to AAA Northern California, Nevada, and Utah, or AAA NCNU in February 2011.