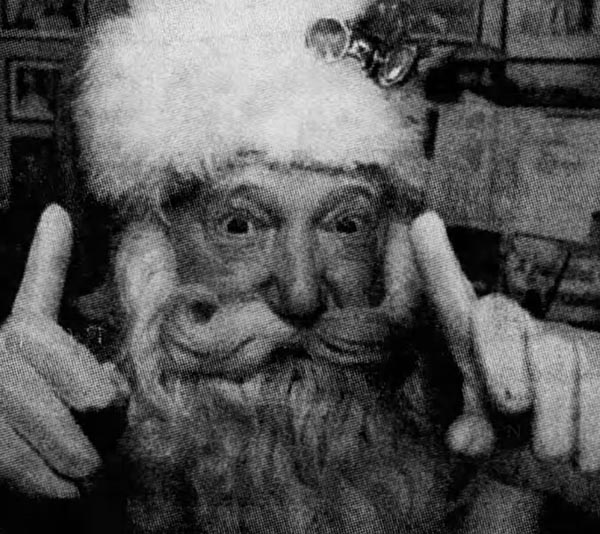 Francis 'Fran' Dowie (1921 - December 21, 2006) was a Canadian performer, actor, cartoonist, vaudevillian, and puppeteer. Born in Richmond, British Columbia, Dowie came from a family of performers, his grandfather, Frank W. Dowie, founded the first minstrel show to perform at London's Palladium in the early 1900s. Dowie began performing at the age of seven with his father Frank in their comedy duo, performing at Vancouver's Orpheum Theatre. From that point on he never stopped. He was a member of a vaudeville troupe during World War II, called 'The Blackouts' and performed for soldiers throughout Canada, Alaska, and all across Europe after the war ended. While performing with 'The Blackouts' Dowie married Candy Kane (1922 - XXXX), who later was forced to return to Canada after she became pregnant. After the war, Dowie directed productions at the Theatre Royal in Barkerville, British Columbia. At the age of sixty-five, instead of retiring, Dowie began performing as Santa Claus for children. He is best remembered for this role and is widely remembered at 'the Lower Mainland's most beloved Santa'. Dowie also became a puppeteer in his later years and was an active member of the Society for the Preservation of Vaudeville. Dowie is a member of the British Columbia Entertainment Hall of Fame and was one of the first selected for a star on the B.C. Hall of Fame's STARWALK.