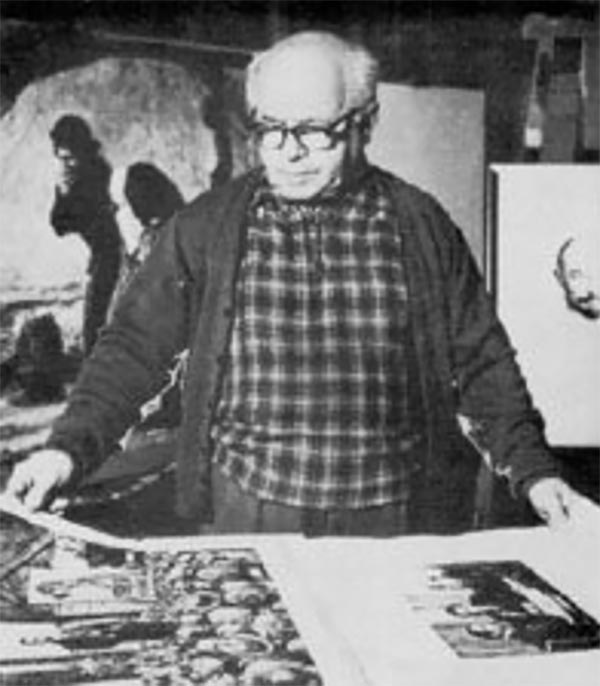 Sándor Ék (August 27, 1902 - January 15, 1975) (a.k.a. Alex Keil) was a Hungarian graphic artist and painter. Ék, the son of a poor working-class family, spent his childhood in a suburb of Pest (Angyalföld). He became interested in socialist ideology at a young age and was a member of the Hungarian Communist Party (KMP) by the age of 16. Ék celebrated the establishment of the Hungarian Soviet Republic (the world's second socialist republic) in 1919, but it survived only 133 days. He fled Hungary after the collapse of the Hungarian Soviet Republic and ended up in Vienna. He participated in the 'Young Worker's International' in Moscow in 1921, where he met Lenin. He stayed in Moscow for some time where he studied with El Lissitzky. During this time he painted in modern and constructivist style, until he gave up these practices for the obligatory socialist realism. He also spent time in Berlin, Paris, and Amsterdam, and settled in Germany in 1925. After Hitler rose to power in 1933 Ék left Germany for the Soviet Union. Ék joined the Red Army in 1944 and was with the army when Budapest was liberated. Following Budapest's liberation, three antifascist posters by Ék, all of which predicted the defeat of Hitler's nazis, were plastered all over the city. After the war, Ék was named the director of the Academy of Applied Arts and, in 1949, he gained a teaching position at the Hungarian Academy of Fine Arts.