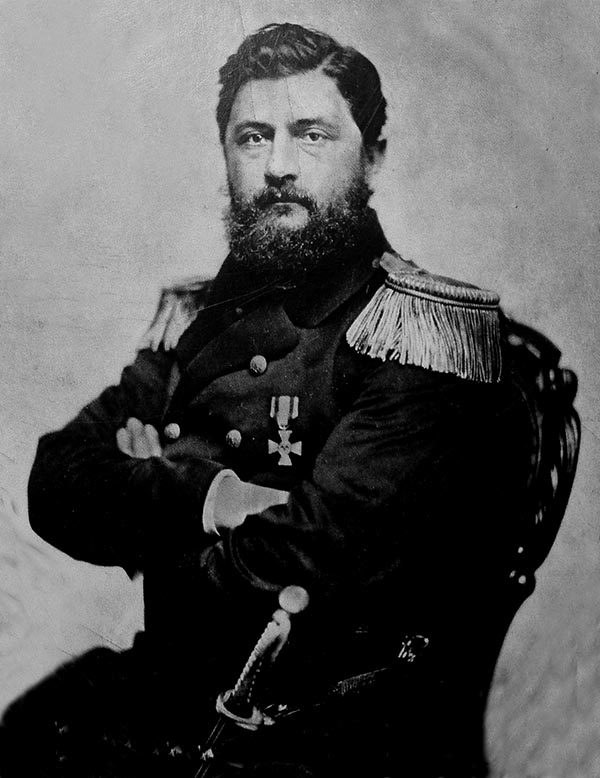 Peter Bernard Wilhelm Heine (January 30, 1827 - October 5, 1885) was a German-American artist, traveler, writier, and military officer. Heine was born in Dresden, the son of a comedic actor at the Dresden Court Theater with family connection to Richard Wagner. He studied art at the Dresden Royal Academy of Art, and later apprenticed under the Dresden historical painter Julius Hübner (1806 - 1882). He studied for an additional three years in Paris before returning to Dresden. There he participated in the May Uprising in Dresden, part of the German Revolutions of 1848-49, the suppression of which forced to him into exile - apparently with the help of Alexander von Humnboldt (1769 -1859). Like many 'Forty-Eighters,' Heine settled in New York, setting up an art studio at 515 Broadway. He quickly gained a reputation as a fine artist and befriended the archeologist and diplomat, Ephraim George Squier (1821 - 1888), who hired him as staff artist for his expedition to Central America. The work earned him renown in Washington, where he was assigned to accompany Commodore Matthew Perry (1894 - 1858) on his expedition to Japan (1852 - 1853), where he served as Acting Master's Mate on the flagship USS Mississippi under Sydney Smith Lee (1802 -1869). The sketches he produced of the places he visited and the people he encountered there, together with the daguerreotypes taken by his colleague Eliphalet Brown Jr., formed the basis of an official iconography of the American expedition to Japan which remains an important record of the country as it was before the foreigners arrived in force. Upon his return to New York in 1855 he published several books: a collection of prints entitled Graphic Scenes of the Japan Expedition; 400 sketches which were included in Perry's official report; and his memoirs, Reiss um die Welt nach Japan (Leipzig, 1856). The memoirs were very successful, and were immediately translated into both French and Dutch. Heine returned to Japan in 1860 on the Prussian financed Eulenburg Expedition (1859 - 1862) under Friedrich Albrecht zu Eulenburg (1815 - 1881). With the outbreak of the American Civil War (1861 - 1865), Heine returned to the United States where he volunteered for the Union Army, joining the 1st Maryland Infantry. Shortly thereafter he was commissioned as a Captain of the Topographical Engineers. He was captured during the Peninsular Campaign and served time in the infamous Libby Prison in Confederate Richmond. He was discharged from military service due to injuries, but in 1863 rejoined the army as Colonel of the German-American 103rd New York Infantry. In 1865 he was made a Brevet Brigadier General but was accused of disobedience and left the army. In the next year he became a clerk to the Paris and Liverpool consulates. After the establishment of the Hohenzollern Empire in Germany in 1871, he returned to Dresden where he wrote his last book about Japan, Japan, Beiträge zur Kenntnis des Landes und seiner Bewohner (Berlin, 1873 - 1880). He died in Dresden in 1885.