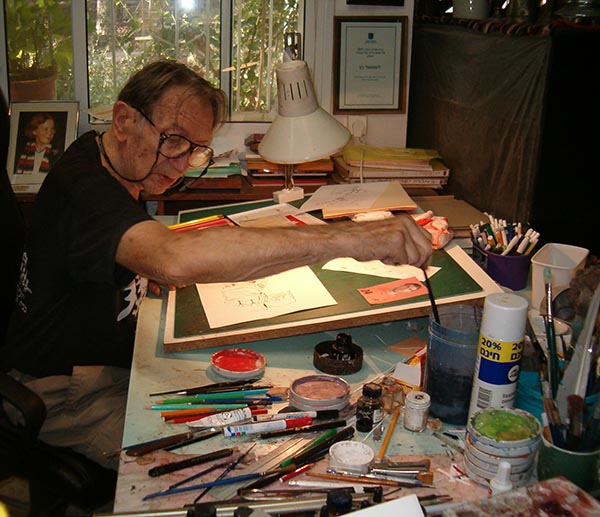 Shmuel Alexander (Sandor) Katz (שמואל כ"ץ) (August 18, 1926 - March 26, 2010) was an Israeli illustrator, cartoonist, and artist. Born in Vienna, Austria, to Hungarian parents, Katz and his family relocated to Hungary after the Anschluss (Nazi Germany's annexation of Austria in March 1938). Katz attended school in Hungary, learned piano, and joined the Zionist youth movement HaNoar HaTzioni. He was deported to a forced labor camp in Yugoslavia after the Nazis invaded Hungary in 1944. He escaped from the camp and went to Budapest, where he was hidden from the Nazis by Carl Lutz in the now famous 'Glass House' network of safe houses, until the Red Army liberated Budapest in mid-February 1945. After the liberation, Katz joined the Hashomer Hatzair youth movement and studied architecture at the Budapest University of Technology and Economics. Katz left Budapest for Mandatory Palestine in 1946 as an Aliyah Bet illegal immigrant aboard the Knesset Israel. The ship was apprehended by the British before arriving in Palestine and interned its passengers in a detention camp on Cyprus. Katz received a legal immigration certificate as part of a Hashomer Hatzair group that went to Israel and became the founders of Kibbutz Ga'aton in Western Galilee. Katz lived in Ga'aton for the rest of his life. His art career began in 1950, when he began illustrating Mishmar Layeladim, the weekly children's supplement to the Mapam party's newspaper Al HaMishmar which he did until 1953. Katz enrolled at the École national supérieure des Beaux-Arts in Paris, France, and studied copperplate engraving, lithography, fresco, and music in 1953 - 1954. he joined the Al HaMishmar editorial board in 1955 as illustrator and graphics editor. Katz traveled widely, including to East Africa in 1958, Iran in 1976, Egypt in 1979, and Hungary in 1986. His artwork has been exhibited worldwide, including in Tehran, Iran, in 1976. In 1961, he created courtroom sketches of Adolf Eichmann's trial in Jerusalem, which are now part of Yad Vashem's collection. Over the course of his career, he sketched soldiers while he served in the IDF, illustrated hundreds of books, and published editorial cartoons in numerous periodicals.