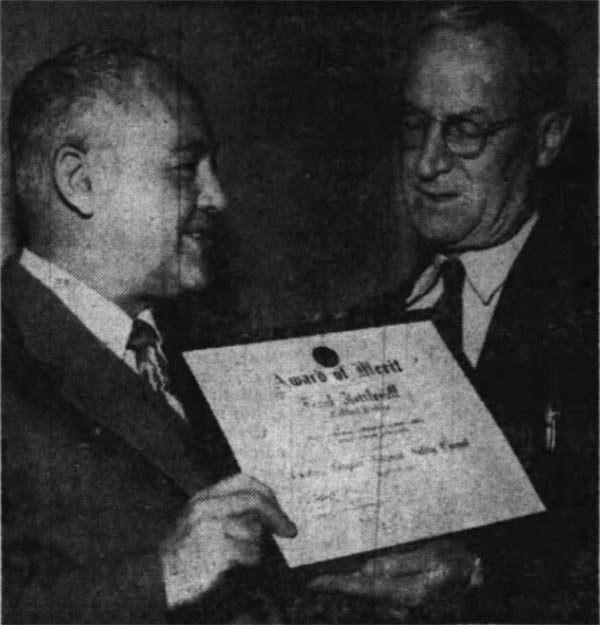 Frank 'Ket' Kettlewell (December 5, 1889 - June 11, 1969) was an American photographer, mapmaker, painter, and cartoonist. The son of Libbie and B. F. Kettlewell, he was born in St. Helena, California, and attended St. Helena High School. Kettlewell arrived in San Francisco after the 1906 earthquake with a shipment of relief supplies. He settled in in San Francisco, initially living with his grandfather. From 1907, Kettlewell attended the Mark Hopkins Institute of Art (San Francisco Art Institute). In 1912, he started at the Oakland Tribune, where he served in various capacities until about 1949, when he was promoted to Art Director, a position he held until 1966. 'Ket,' as he was euphemistically known, became a fixture at the Tribune for his 'Ket's Eye View' photography series and whimsical political cartoons. All of his cartoons are signed 'KET,' and some feature a small black bird as part of his signature that occasionally played a role by commenting in some way. Kettlewell also produced artwork for Jack Burroughs' long running column 'Your Town,' as well as maps to accompany Tribune local interest features. He served as the President of the Oakland Press Club from 1925 - 1926 and as a judge for Tribune sponsored photography contests. In 1948, Kettlewell designed a postage stamp for the United States Postal Service commemorating the 100th anniversary of the 1948 Sutter's Mill gold strike. In 1952, he received an award from the National Safety Council for a series of photomontages highlighting traffic safety. In addition to his commercial art, Kettlewell was an inveterate tinkerer who enjoyed designing and building his own tools, among them a gem polisher. His other hobbies included metalworking, woodworking, and stamp collecting. He was also a founding member of the East Bay Astronomical Society and served as its director there for roughly twenty-five years. Kettlewell married Beatrice Jackson in 1913.