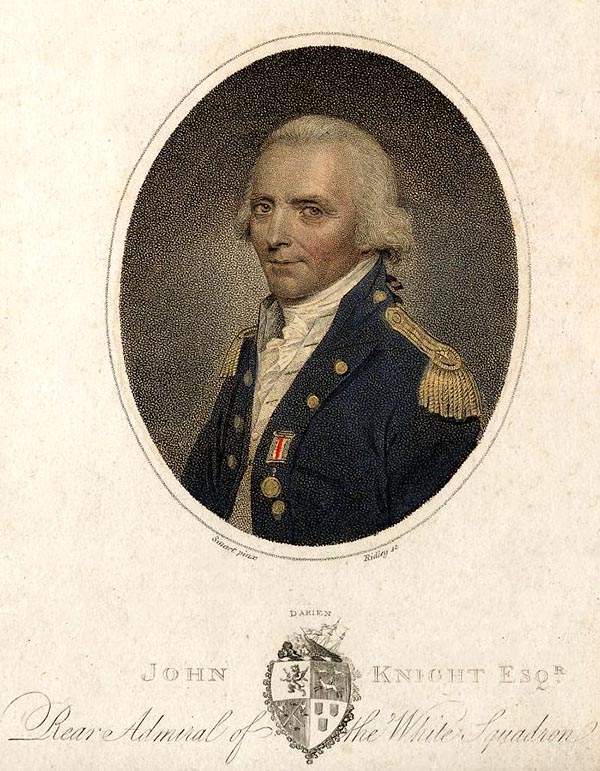 John Knight (February 21, 1747 - June 16, 1831) was a Scottish naval officer and marine surveyor active in England in the late 18th and early 19th centuries. Knight was born in Dundee, Scotland. He was the son of a well-respected British Navy Rear Admiral, also named John Knight. At just 11 years old, he joined the Royal Navy serving under his father during the Seven Years War. After the war, he assisted Joseph Frederick Wallet DesBarres surveying the northeastern coasts of America before returning to Europe. In 1775, just prior to the outbreak of the American Revolutionary War, he returned to the Americas, now a Lieutenant where he served on the HMS Falcon. He was in Boston during the Battle of Bunker Hill and in 1776 was captured by an American Schooner. After a prisoner exchange he returned to British naval service in command of the independent hired vessel, the HMS Haerlem, with which he raided the American eastern seaboard. Around this time Knight met his wife, Prudence Reynolds, who he met and married in America and with whom he had eight children and maintained an extremely close relationship despite extended navy tours of duty. In 1780, onboard the HMS Barfleur with young Prince William Henry (William IV), who performed the duties of a Midshipman, he participated in the Battle of Fort Royal and the Battle of the Chesapeake. After the war he remained in command of the HMS Barfleur, where he was given the responsibility of educating William, who also remained with the ship, in maritime matters. He served in various posts throughout the French Revolutionary Wars and conducted an important survey of the English Channel – the first to use the newly invented Marine Chronometer. In 1801, Knight was promoted to rear-admiral, and in 1805, during the Napoleonic Wars, he was named as commander at Gibraltar, where he remained for another ten years until the war's end. He retired from the British Navy as a full admiral and a Knight Commander of the Order of the Bath. After retirement he settled with his family at Woodend House in Soberton, Hampshire, and died there in June 1831. Although he was respected professionally, Knight was unpopular with his crew and with fellow officers. His commands were known for lax discipline and he was resented by his crew for frequently brining wife and children to sea.