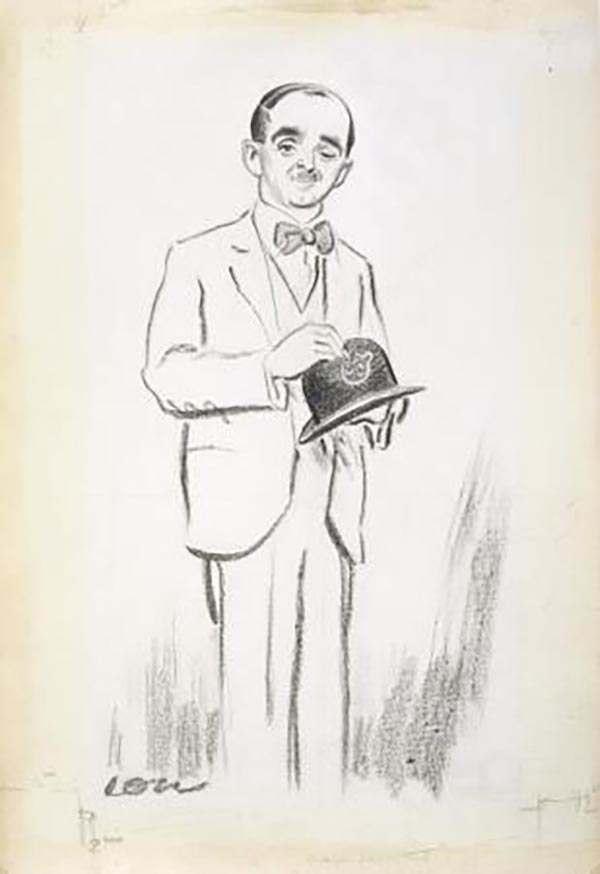 Sir David Alexander Cecil Low (April 7, 1891 - September 19, 1963) was a New Zealand caricaturist and political cartoonist. A self-taught cartoonist, Low was born in Dunedin and later moved to Christchurch with his family, where he briefly attended Christchurch Boys' High School. His parent took him out of school after the death of his eldest brother because they believed that over studying had weakened him. Low's first published cartoon, a three-picture strip, appeared in the British comic Big Budget in 1902, when low was 11 years old. He got his first job as a professional cartoonist with the Canterbury Times in 1910, and moved to Sydney, Australia the next year to join the staff of The Bulletin. While working for The Bulletin, Low found success drawing political cartoons of then Prime Minister of Australia Billy Hughes. He published a collection of his cartoons lampooning Hughes and his forceful and eccentric personality in 1918. This work brought Low to the attention of Henry Cadbury, part owner of the London Star, who offered Low a job with the Star. Low promptly accented the offer, and moved to London in 1919. He worked for the London Star from 1919 until 1927, where he found a receptive audience for his moderate left-wing views. Low joined the Evening Standard in 1927, a conservative publication, on the strict understanding that his output would not suffer any editorial interference. It was during his time at the Evening Standard that Low created his most well-known work. He produced cartoons about the Austrian Civil War, the Italian Invasion of Ethiopia, the 1936 Summer Olympics in Berlin, the Spanish Civil War, and many other events of the interwar period, including the Western Allies' attempts at appeasing Hitler and avoiding a war. In 1937, Jospeh Goebbels, the Nazi Propaganda Minister, told British Foreign Secretary Lord Halifax that British political cartoons, and Low's in particular, were harming Anglo-German relations. Low went so far as to create a reoccurring strip entitled 'Hit and Muss', but, after Germany lodged official complaints, Low elected to create a composite dictator named 'Muzzler'. One of Low's most famous cartoons, entitled Rendezvous show Hitler and Stalin bowing to each other over the prostrate corpse of Poland. To this day, this concept is repurposed for modern cartoons. Low left the Evening Standard in 1950 and joined the Daily Herald, where he stayed until 1953. That year he moved on to the Manchester Guardian. Low was known as 'the greatest caricaturist in the world' and, in his obituary, The Guardian called him 'the dominant cartoonist of the western world.' Low was knighted in 1963 and died in his home in London on September 19, 1963. He married Madeline Grieve Kenning of Auckland on June 7, 1920, with whom he had two daughters.