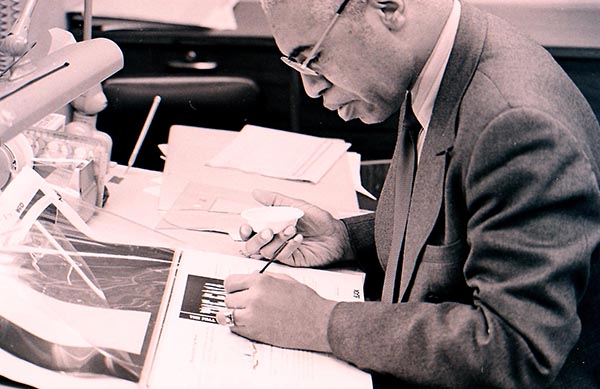 Eugene Majied (February 4, 1926 - March 1, 2005) was an African American illustrator, comic, and social-realist painter active with the Nation of Islam. Majied was born in Spartenburg, South Carolina as Eugene Franklin Rivers. He was well educated, his father being the principal of Spartanburg's African American Highschool. He went on to study art at the School of the Museum of Fine Art in Boston. He served in World War II (1939 - 1945), after which he settled in Chicago where he took on janitorial work. Eventually he retured to his artistic focus, taking work as an illustrator for The Chicago Daily Defender, that city's largest black-owend newspaper. He later joined the Nation of Islam as an illustrator for the organization's newspaper, Muhammad Speaks. There he found his greatest readership, establishing himself as one of America's most prominent cartoonists of color. Some of his work his signed Majied, others as 'Eugene XXX', still others as 'Frank Lee'. Much of his work remained unsigned and attributed to Elijah Muhammad, founder of the Nation of Islam. It his later years he returned to Spartenburg where he worked as the head illustrator for the Greenville News.