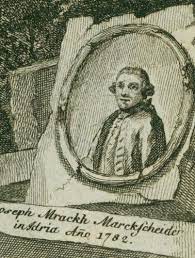 Joseph Mrakh (Jožef Mrak; February 25, 1709 - August 14, 1786) was a Slovenian mapmaker, surveyor, painter, and engineer active in Austria, Europe, and Turkey in the mid to late 18th century. Mrakh was born in Idrija, Slovenia. While his childhood is mired in obscurity, it appears in 1736 as an apprentice at the Idrija mercury mine. By 1737, he was noted as a skilled draftsman and surveyor. The Idrija mine director, Franz Anton von Steinberg, commissioned him to map the entirety of the mining operation. He produced a relief map of the Idrija mines in 1744, with additional mining plans and technical drawings appearing in 1845 and 1850. He is thus considered the leader and the main representative of the so-called Idrija Cartographic School. From 1763 to 1769, he also taught at the School of Metallurgy and Chemistry. Among his many apprentices was his son, Anton Mrak (1739 - 1801), who followed in his father's footsteps and a cartographer and mining engineer. He retired from the mining industry in 1776. In addition to his cartographic work, he also decorated the parish church of the Assumption of Mary in Spodnja Idrija with frescoes.