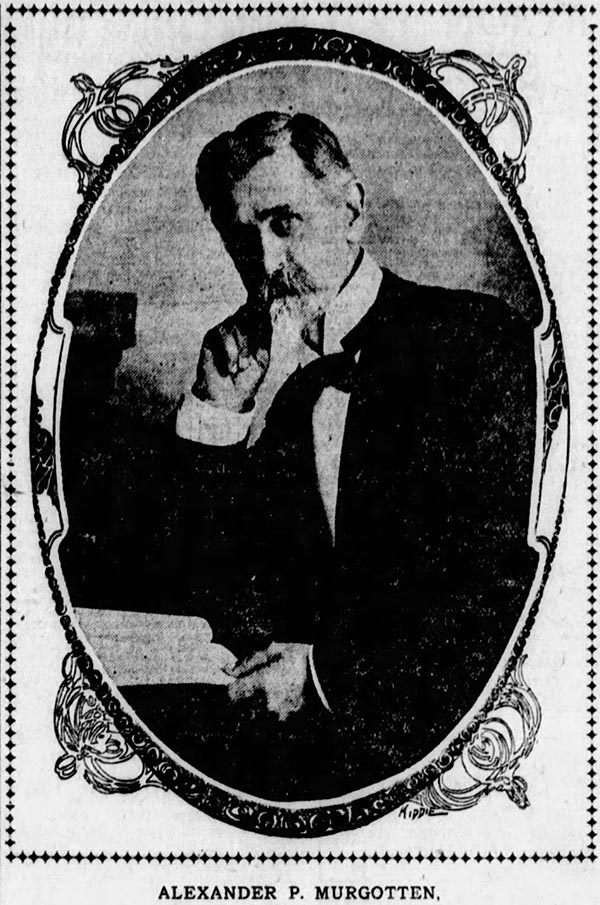 Alexander Phillip Murgotten (February 10, 1846 - April 27, 1926) was an American publisher and historian. Born in Lagro, Indiana, Murgotten moved to California at the age of six. His first job was selling papers to miners in California. He learned the printing trade from William A. January who published the Mountain Democrat. He arrived in San Jose on January 1, 1866, and would spend most of the rest of his life in the city. He spent two years working for the Santa Clara Argus as its forman of the office and then opened his own printing firm. He began publishing the California Pioneer (we've seen references that called this publication the San Jose Pioneer as well), a weekly paper that covered the interests of California pioneers, in 1877. He worked for the U.S. government from 1885 until 1889 when he was superintendent of deposit melting at the U.S. Mint in San Francisco. In this position he handled millions of dollars worth of gold bullion every day. He returned to San Jose in 1889, where he became the junior member in the publishing firm Cottle and Murgotten (a partnership that lasted at least five years) and resumed publishing the Pioneer. He began publishing the monthly The California Elk in 1901, which discussed the interests of the Benevolent and Protective Order of the Elks of the United States. He helped found the Santa Clara County Pioneers' Society in 1875 and served as its secretary until 190p0. Murgotten married Martha Kelley Munroe on June 28, 1868, in San Jose, and they had five children.