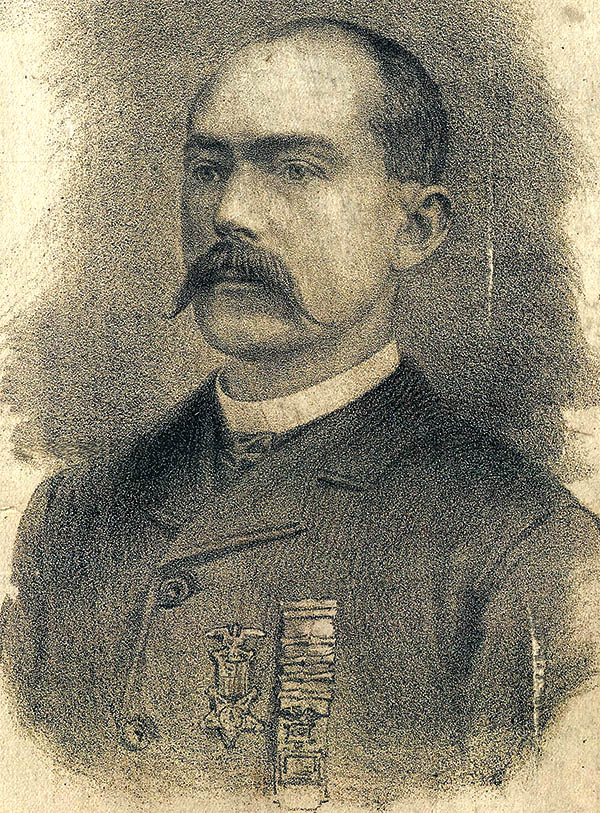 Thomas O'Dea (c. 1849 - March 18, 1926) was an Irish-American remembered for his monumental drawing of the Confederate Prison at Andersonville, officially known as Camp Sumter, Georgia. O'Dea immigrated from Ireland with his family as a young child and settled in Boston. In 1861 at the age of 14, O'Dea wanted to follow his brother George into the Union Navy, but he was turned away and told to 'go home and grow up first'. Two years later, he ran away from home and enrolled as a drummer in the 16th Regiment of the Maine Infantry Volunteers in July 1863. He fought at the Battle of the Wilderness and was captured in May 1864. After short stays in several Confederate prisons, he arrived at Andersonville during the summer of 1864. O'Dea was released from Andersonville on February 24, 1865, and he left ill and emaciated, wearing only a ragged pair of trousers and broken shoes. After months of recuperation, in July he returned home to Boston in the hope of reuniting with his family, but they had disappeared. O'Dea moved to Cohoes, New York in the early 1870s and found work as a mason. Eventually he was elected general secretary of the Bricklayers and Stone Masons Union of America and the Cohoes Board of Supervisors. O'Dea started work on his masterpiece in 1879 after seeing a report that portrayed Andersonville as being orderly. After six years of painstaking work, mostly at night after long days of laying bricks, O'Dea's 4.5 x 9 foot pencil sketch was finished. In the years following completion of his work, O'Dea's drawing gained a place in the nation's psyche. Due to popular demand, O'Dea set up a business and sold examples in various size formats and became a successful businessman. O'Dea married Catharine McGuinness, with whom he had five children.