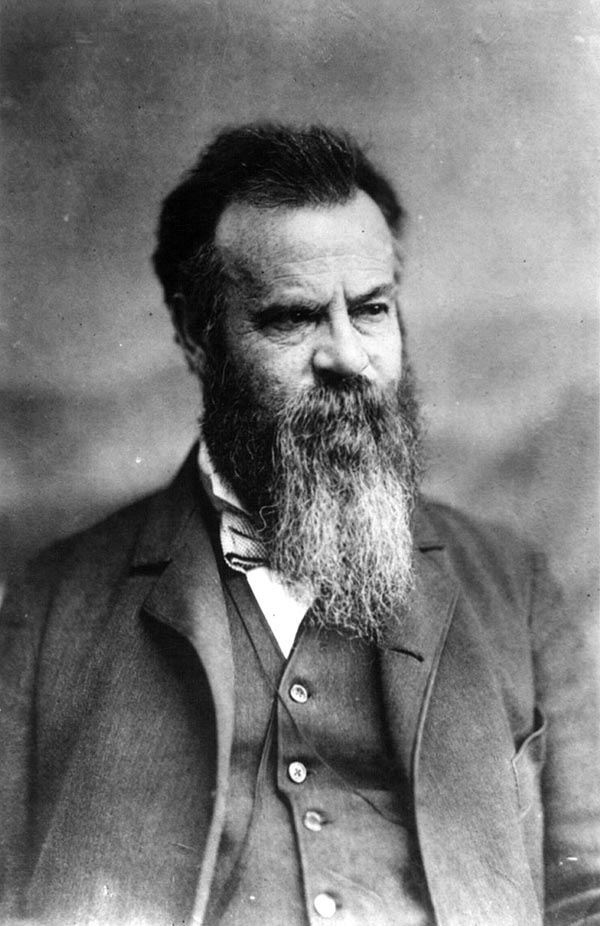 John Wesley Powell (March 24, 1834 – September 23, 1902) was an American explorer, cartographer, geologist, and ethnologist. Powell is best known for his bold exploration of the rapids of the upper Colorado river in the Grand Canyon. Powell was born in Mount Morris, New York. He was the son of an English Methodist preacher. The Powell family relocated to Southern Ohio in 1838 where, under the tutelage of George Crookham, he developed an interest in the natural sciences, history, and literature. Powell became a schoolteacher in Illinois in 1852 but always had a desire to explore the great American rivers. He undertook self-financed explorations of both the Ohio and Mississippi Rivers. At the outbreak of the American Civil War he joined the Union Army where took a bullet in the Battle of Shiloh and subsequently lost his right arm. Powell recovered and returned to active duty having earned promotions to the rank of major. He participated in the Atlanta Campaign and the Battle of Nashville where he served on General George Henry Thomas's staff. After the war, Powell returned to teaching and self-financed explorations – including a trip to Colorado. In 1868 Powell began the series of Colorado River expeditions for which he is most famous. He returned to the Colorado River and the Grand Canyon 2 years later with full government sponsorship. This expedition of 1872-1872 produced the first accurate maps of the Grand Canyon. After the expedition he was appointed the first director of the U.S. Bureau of American Ethnology at the Smithsonian Institution, a position he retained until his death. He also served as director of the U.S Geological Survey from 1881 to 1894. He was an advocate of careful water management in the American west, believing there was not enough water in California to sufficiently irrigate all the lands. In this it seems he has proven remarkably prescient. Powell died while on vacation in Maine and is buried in Arlington National Cemetery.