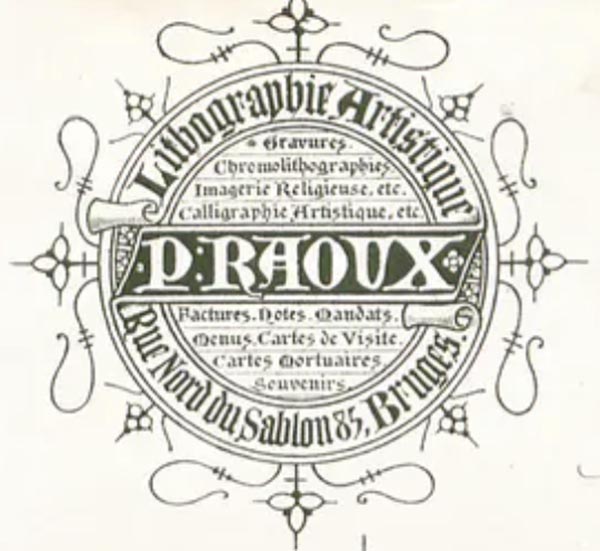 Pierre / Pieter Raoux (September 8, 1845 - October 3, 1917) was a Belgian graphic artist, engraver, printer, and lithographer active in Bruges from roughly 1879 to 1889. Raoux ws the eldest son of Francisca Lagast - at the time unmarried. When she married the carpenter Edmond Raoux in 1850, Pieter was legitimized. His family was nonetheless mired in poverty and Pieter was consigned to the care of the Broeders van Liefde (Brothers of Charity) at Katelijnestraat. Raoux studied art at the Brugse Academie and was later trained as a lithographer under Jacques Petyt (1822 - 1871). Roaux took over management of the Petyt studio, along with his widow, and ran it until 1874. Around this time he received a state grant to study the new printing technique of chromolithography in Paris. He received a subsequent private grant from Jean-Baptiste Bethune and printer-publisher Henri Desclée to study painting in Italy. Their intention was for him to take over the Saint Augustin printing house in Bruges. Although this project ultimately led to fruition, Raoux had a disagreement with Bethune and Desclée and started his own business in 1879. In 1889, he closed his printing studio and took over management of St. Augustin, as was intended. In this position most of his work was done on behalf of ecclesiastical orders, but included religious cards, memorials, blessings, and at least one map. His offices were at Noordzandstraat 85.