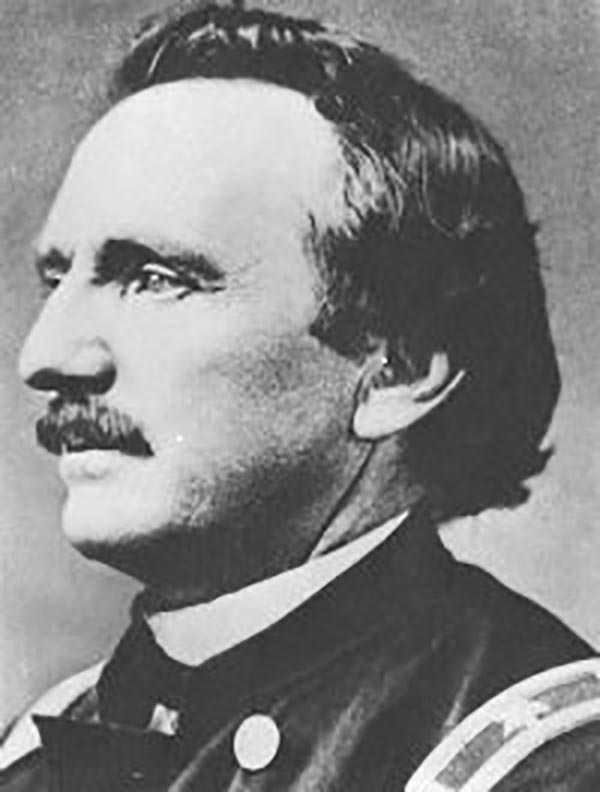 William Franklin Raynolds (March 17, 1820 - October 18, 1894) was an American explorer, engineer, and U.S. Army officer. Born in Canton, Ohio, Raynolds was the fourth of six children to William Raynolds and Elizabeth Seabury. Raynolds entered the United States Military Academy at West Point on July 1, 1839 and graduated fifth in his class of thirty-nine in 1843. Initially commissioned as a second lieutenant and posted with the 5th U.S. Infantry, he was soon transferred to the U.S. Army Corps of Topographical Engineers. His first assignments were as an assistant topographical engineer involved in improving navigation of the Ohio River and then mapping the northeastern boundary of the United States. During the Mexican-American War, Raynolds served in Winfield Scott's campaign which marched overland from Veracruz to Mexico City. After the war and during the occupation, Raynolds and a few other engineers decided to map and explore the nearby mountains. He and his party are credited as being the first to summit Pico de Orizaba, the tallest mountain in Mexico and the third tallest in North America. After returning from Mexico, Raynolds again took up the project of surveying the northern border of the United States. This project, however, did not last long, as Raynolds was soon assigned a project to develop water sources for Washington, D.C. and then was tasked with surveying and mapping the shorelines of the Great Lakes while identifying potential lighthouse locations. In 1857, he designed and supervised the construction of lighthouses along the Jersey Shore and the Delmarva Peninsula. In early 1859, Raynolds was given the task of leading an expedition into the Yellowstone region of Montana and Wyoming with the goal of determining, 'as far as practicable, everything relating to...the Indians of the country, its agricultural and mineralogical resources...the navigability of its streams, its topographic features, and the facilities or obstacles which the latter present to the construction of rail or common roads.' Raynolds and his party would spend the next two years in the West and was the first federally funded party to enter Jackson Hole or observe the Teton range. The American Civil War, however, would keep Raynolds from presenting his findings until 1868. At the outbreak of the Civil War, Raynolds made his way back to Washington, D.C. where he was named chief topographic engineer of the Department of Virginia in July 1861. As no suitable maps of Virginia existed for military use, Raynolds and his team immediately set to work surveying and mapping the part of Virginia that remained loyal to the Union. This part of the state would become the State of West Virginia in 1863. In January 1863, Raynolds was put in charge of the defense of Harper's Ferry, West Virginia, but by 1864 hostilities in the West, particularly with the Sioux Indians, made Raynold's knowledge of the Great Lakes more valuable than his understanding of the defenses of Harper's Ferry. He was transferred in April and would not see any more combat for the rest of the war. After the war, Raynolds remained in the Army Corps of Engineers and worked on various projects, including improving the navigation of the Arkansas, Missouri, and Mississippi River, building harbors, and overseeing lighthouse construction. Raynolds retired from the Corps of Engineers in 1884, after a forty year career. We know very little about Raynold's private life, however, we do know that he married young and he and his wife did not have any children.