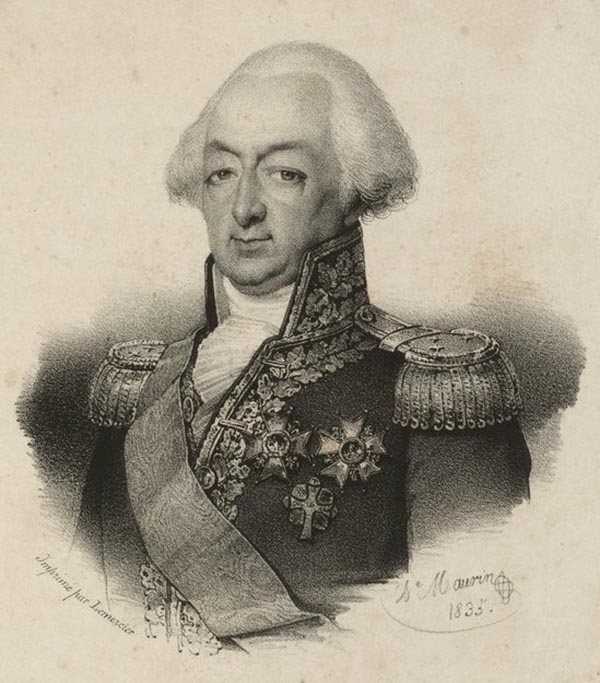 François Étienne de Rosily-Mesros (January 13, 1748 - November 12, 1832) was a French hydrographer, explorer, and naval officer active during the French Revolutionary Wars (1792 - 1802) and subsequent Napoleonic Wars (1803 - 1815). Rosily was born in Brest , the son of a prominent French naval officer. He apprenticed as a naval officer from 1762 to 1769. Reaching his independence, in 1770 he was commissioned as an enseigne de vaisseau under Yves-Joseph de Kerguelen-Trémarec (February 13, 1734 - March 3, 1797). He accompanied Kurguelen on the Third French expedition in search of Terra Australis from 1772 - 1774. In 1775 Rosily took command of Vénus and spent several years charting the coasts of east Africa, the Red Sea, the Persian Gulf, and India. In 1778, Rosily was transferred to the Pondicherry-baesd Méduse, which mapped parts of the South China Sea, including Conchinchina, the south China, and the Philippines. During the Napoleonic period, Rosily had strained relations with the emperor, who despite considering him an able naval officer, derided him for his lack of active combat service. Napoleon instead deployed him to surveying and mapping expeditions consistent with his military ambitions - including a mapping of the coast of Africa. Napoleon eventually granting Rosily a major command in Cadiz, but arriving after the British destroyed the Cadiz fleet, he was unable to fulfill his commission. Rosily was made director of the Dépôt de Marine in 1795 and retained the position until 1805. After Napoleon was deposed in 1815, the new king Louis XVIII granted him the promotion he was denied under the emperor, making him a Grand Officer of the Légion d'Honneur. In 1816, for his many scientific expeditions, he was made a free associate of the Académie des Sciences. He was also made emeritus director of the Dépôt de Marine. He died in Paris in 1832.