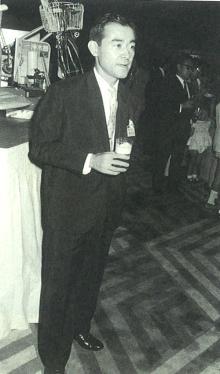 Shogakukan (小學館; August 8, 1922 - Present) is a Tokyo-based Japanese educational, nonfiction and manga publisher. The firm was founded by Takeo Ōga (相賀武夫; April 2, 1897 - August 12, 1938) in 1922. Takeo graduated from elementary school and immediately went to work for Takamatsu Agricultural College. From 1911 he worked as a clerk for Tokutaro Yoshida, owner of Yoshida Bookstore in Okayama City. In 1922, Takeo founded Shogakukan in Nishiki-cho, Kanda-ku, Tokyo with Iwajiro Yoshida and Tokutaro Yoshida. In that year he launched grade-specific magazines for 5th and 6th grade, respectively. Takeo Ōga died in 1938, having literally worked himself to death, and the business was taken over by his son Tetsuo Ōga (大賀哲夫), who formally incorporated Shogakukan in 1945. The firm published various children's magazines with a military propaganda angle throughout World War II. Today they are known for supporting new Manga artists. Today they are a major publishing concern managed by Takeo's grandson.