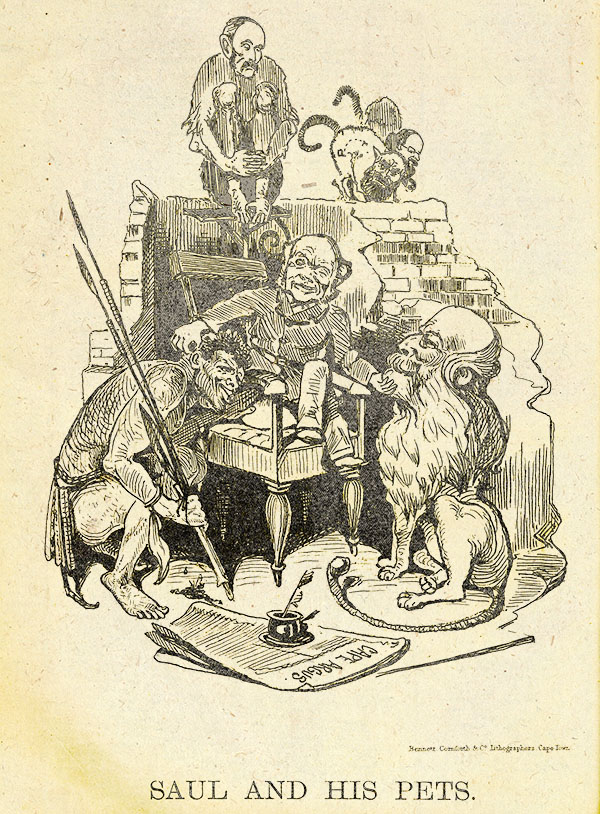 Saul Solomon (May 25, 1817 - October 16, 1892) was a Jewish South African politician and publisher based in Cape Town. Solomon was born on St. Helena, where which his father, also Saul Solomon, arrived as a stowaway. Soloman Sr. developed a ship provisioning business on the island, becoming extremely wealthy. Soloman Sr. must have been quite stingy as, despite his wealth, he sent his son low-cost Jewish children's boarding house in London. There, young Saul Solomon suffered from malnutrition, leading to rickets, stunted legs, and other health issues that would plague him for the remainder of his life. As a young man, he moved to Cape Town to apprentice as a printer. He must have exhibited exceptional business acumen, a trait he doubtless inherited from his father, and bought his mentor's business. The Solomon printing concern steadily rose in size and respect, acquiring lucrative private and government contracts. By the second half of the 19th century, when this map was made, Saul Solomon controlled the largest printing concern in South Africa. In addition, he owned the Cape Argus newspaper, a liberal daily still in publication. He also founded Old Mutual, today one of South Africa's largest insurance firms. Beyond his business and publishing interests, Solomon was champion of liberal social and political values. He advocated for human equality and opposed all legislation that introduced distinctions based upon class, race, or creed. Alas, despite his influence, South Africa took another path. In any case, he continued to be active in both business and government, championing the Responsible Government Movement (1854 - 1872) and the Eastern Cape Separatist League (1854 - 1874). He was strongly against Lord Carnarvon's push to confederate the different states of Southern Africa. He retired from public life in 1883 due to poor health and moved to Kilcreggan, Scotland, in 1888, where in 1892 he died of Chronic tubular nephritis. His wife and children went on to prominent political, business, and artistic careers in South Africa. Despite his large publishing empire, Solomon is known to have issued only one map - a plan of Cape Town c. 1877.