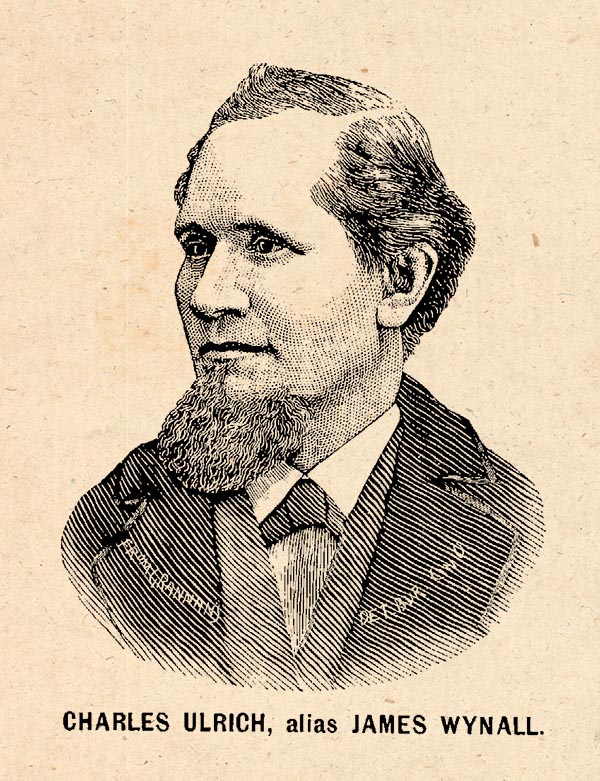 Charles Frederick Ulrich (June 25, 1835 - March 18, 1907), also known as Adam Miller and James Winell / Wynell, was a Prussian-American engraver and artist generally known as 'The World's Greatest Counterfeiter'. Ulrich was born in Westphalia, Germany where his father was a jeweler. He was apprenticed as an engraver 14 and studied the art for five years. By 1853, when he was 19 and emigrated to London, Ulrich was already a prodigy engraver. While some report that Ulrich fled Germany to avoid the draft, there is other evidence suggesting he was already counterfeiting currency in Berlin and fled to escape Prussian authorities. In England, he was suspected of producing Bank of England notes and fled again, this time to New York. There, penniless, he was successfully solicited by a private British draft agent and served 18 months in the Crimean War, where he had the ill fortune to be assigned as a draftsman to the 'Light Brigade' and was one of the few to survive Lord Ralgan's disastrous charge at the Battle of Balaclava. He was not, however, unwounded and laid 36 hours in the mud of Balaklava with his skull crushed by a Russian musket. On recovery in London, he was paid for his service and in late 1853, used the funds to once again migrate to New York. For about 2 years he worked in New York as a successful and legitimate engraver. It was around 1865 that he turned his engraving talents fully to currency counterfeiting. His fake banknotes caught the attention of the Secret Service who in 1858, caught him in the act of engraving the vignette on a 5-dollar note. What followed was a 'catch-me-if-you-can' extravaganza involving multiple captures and escapes including one instance where he carved a working prison key from sight using a stolen shoemaker's awl and a tin chamber pot. He was eventually apprehended in Canada by the Mounted Police and extradited to New York. There, Ulrich was convicted of counterfeiting and sentenced to 5 years in Sing Sing, of which he served 3, receiving an 1861 pardon by Governor Morgan. He was almost immediately back at counterfeiting, this time forging 50,000 USD worth Bank of England notes which he took to Europe, where they passed all tests and were accepted as authentic. He apparently also used this wealth to acquire a noble title. At this time he may have been arrested in Germany, but escaped and returned to the United States. Ulrich moved to Columbus, where he had a short-lived engraving shop and befriend a local boy, Bill Burns. He then relocated to Cincinnati in 1867, but was arrested in 1868 and convicted of forging a 500 USD treasury note. In June of 1876, after serving 8 of his 12-year sentence (again pardoned), he returned to Ohio, where around 1875, he attempted to establish a legitimate lithography business. His lithography company reportedly failed shortly thereafter, prompting Ulrich to relocate to Philadelphia, where he partnered with the brilliant counterfeiters Henry C. Cole (who distributed the currency) and Jacob Ott (lithographer who printed the currency). There this gang is reported to have passed some 350,000 USD in counterfeit currency. Already a wealthy man, Ulrich returned to Cincinnati, where he partnered with several local businessmen in a grand counterfeit plot to make perfect 10 USD bills and flood the country with them - the idea being that smaller denomination note would pass unquestioned. The gang was captured by the secret service before they could complete their scheme. In 1879, Ulrich turned state's evidence and was released on his own reconnaissance. He then set out to live a quiet life in Trenton, New Jersey, but his legendary success as a counterfeit engraver lead numerous criminal gangs to seek him out, most prominent among these being the Charles Brockway Gang. This begins yet another bizarre twist. The local boy he befriended in Columbus back in the 1860s, Bill Burns, had become a crack detective with the secret service responsible for tracking down and arresting Ulrich - who he called 'Uncle Charley'. Burns followed Ulrich from Cincinnati to Scotch Plains, New Jersey, where Ulrich he arrested Ulrich in November of 1887. Ulrich was in possession of a newly engraved steel plate for a 100 USD treasury note. Ulrich was convictd and served at least 5 years. While prison, Ulrich was given an office and engraving tools. There he completed his two most notable legitimate works, a steel plate of Governor William Allen, and a large view of Cincinnati. The view, believed at the time to be the largest steel plate in the world, was sent to New York for printing, as no midwestern press could accommodate it. Around 1893, Ulrich again returned to Cincinnati, where he lived with his wife and children on Loth Street and from at least 1900 operated a small engraving business on Third Street. Between 1894 and 1895 he turned spy for the federal government and helped to capture the notorious Brockway Gang of counterfeiters. Ulrich closed the engraving shop when his health began to fail. He lived for 15 years after leaving prison before dying of heart failure in Cincinnati. As a side note, Ulrich was also a serial polygamist with multiple wives. He should not be confused with Charles F. Ulrich (October 18, 1858 - May 15, 1908), the American painter and sculptor.