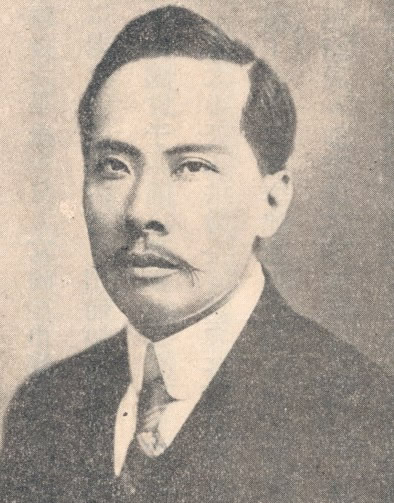 Xie Zuantai (謝纘泰, 1872 - 1939) was a Chinese artist, publisher, and revolutionary active in the late 19th century and early 20th century. He was born in Guangdong but raised in Australia where he received a western education. His father, Xie Richang, was a prominent Chinese businessman in Australia and ardently anti-Qing. The Xie family relocated to Hong Kong in 1887 to accept a position with the Works Bureau. In 1892, Zuantai, along with Fujian English instructor, Yang Quyn, founded the Furen Literary Society to support pro-Chinese anti-Qing nationalism. He soon became involved with Sun Yat-sen's Kuomintang (KMT) Nationalist Party, producing and publishing English-language propaganda in Hong Kong. He was a founding member of the Revive China Society. He prepared one map, a serio-comic pro-China criticism of the Qing and of foreign influence. The map is considered to be the first cartoon created by a Chinese artist in Hong Kong. Zuantai was also, bizarrely, is credited with inventing the 'Chinese Airship', but of course, the hot air balloon was hardly a new invention.