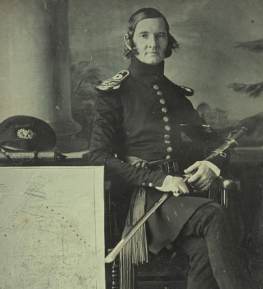 James Duncan Graham (April 4, 1799 - December 28, 1865) was an American topographical engineer active with the Army Corps of Engineers in the first half of the 19th century. Graham was born in Prince William County, Virginia to a family of Scottish descent. He studied at West Point and entered the army upon graduating in 1817 as a Third Lieutenant of the Corps of Artillery. He is reported to have embodied the 'highest accomplishments of the polished gentleman and distinguished scholar.' During his long career with the Topographical Engineers, Graham participated in many of the most important events of the 19th century, ranging from the Mexican American War (1846 - 1848) and the Civil War (1861 - 1865), to surveying the Texas Boundary, producing the first scientifically accurate survey of Cape Cod, mapping the Great Lakes, and the survey of the Mason Dixon Line. Graham died in his home in Boston of sudden heart failure at 66 years of age.