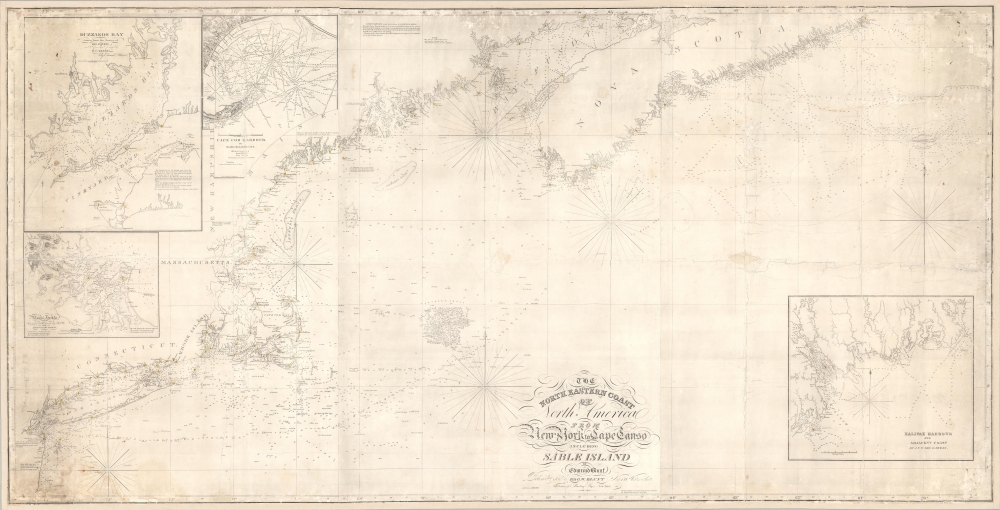 Monumental Sea Chart of the Coast of the Northeastern United States.
$2,500.00

This is Edmund Blunt's rare, monumental nautical map of the northeast United States, extending from New York to Cape Canso in Nova Scotia, the most authoritative American chart of these waters available at the time. It provides not only granular detail of the coastline, but also detailed soundings for the crucial sailing lanes from Halifax to Boston. It is a working chart - typically referred to as a 'blueback chart' due to the color of the original reinforcing paper it was originally mounted to. Rather than contend with multiple charts, mariners typically preferred large charts composed of several sheets: hence this impressive expanse of chart.

This chart covers from Barnigat Lighthouse on the Jersey Shore to the Cranberry Island Lighthouse east of Cape Canso. The chart extends further east to comprehend Sable Island and the Sable Island bank. As such, the chart is an essential tool for navigators making the transatlantic crossing from England and Ireland via Halifax.

This scarce chart was executed in 1828, when Blunt's workshops were located at 154 Water Street on the corner of Maiden Lane. This example, with the notation that it has been corrected to 1840, shows the firm's new address of 179 Water Street, at the Southeast corner of Burling Slip. 1848 examples of this chart, for example the copy at NYPL, show this address but with significantly altered typography in the title, suggesting more drastic changes to the chart beyond the title. We see five examples of the 1828 edition of this chart in OCLC, with two further copies of the 1844 edition and two of the 1848. We see no examples of this 1840 issue in any institutional collections.


Joseph Frederick Wallet Des Barres (November 22, 1721 - October 24. 1824) was born in Switzerland in 1721. He is known to have attended the University of Basel where he tutored under the great mathematician Daniel Bernoulli. Following his studies in Basel, Des Barres immigrated to Great Britain where he continued his education at the Royal Military College of Woolwich. Sometime in the 1850s Des Barres joined the American Regiment of the Royal Army in the capacity of Military Engineer. He was assigned to the team surveying the St. Lawrence River where he worked with the legendary cartographer Samuel Holland as well as the young James Cook. Afterwards Des Barres went on to survey and map the Maritime Provinces of New Brunswick, Nova Scotia, and Newfoundland. Des Barres work is known for its stunning combination of accuracy and aesthetic appeal. Augustyn, in Manhattan in Maps writes that with Des Barres, "nautical charting took an unprecedented leap toward greater precision and graphic sophistication". Upon his return to England in 1774, Des Barres was assigned to compile all of the most current cartographic information on the New World into the seminal Atlantic Neptune, which has been described as the "most splendid collection of charts, plates and views ever published" (National Maritime Museum Catalogue). Des Barres would eventually return to Canada where he lived another forty years as a wealthy land owner and active political figure. He died at the ripe old age of 103, one of the few centenarians of the early 19th century. Learn More...


James Duncan Graham (April 4, 1799 - December 28, 1865) was an American topographical engineer active with the Army Corps of Engineers in the first half of the 19th century. Graham was born in Prince William County, Virginia to a family of Scottish descent. He studied at West Point and entered the army upon graduating in 1817 as a Third Lieutenant of the Corps of Artillery. He is reported to have embodied the 'highest accomplishments of the polished gentleman and distinguished scholar.' During his long career with the Topographical Engineers, Graham participated in many of the most important events of the 19th century, ranging from the Mexican American War (1846 - 1848) and the Civil War (1861 - 1865), to surveying the Texas Boundary, producing the first scientifically accurate survey of Cape Cod, mapping the Great Lakes, and the survey of the Mason Dixon Line. Graham died in his home in Boston of sudden heart failure at 66 years of age. Learn More...

Average condition. Mended tears with some loss, areas of scuffing. Stabilized and mounted on modern linen.